I’m a digital junkie, but when one is travelling to another country, that’s a problem. Here’s my thoughts on what to do, and would like your input as well.

I’m a digital junkie, but when one is travelling to another country, that’s a problem. You only have so much room for carry on the plane, and then you have to worry all about the power adapter stuff. I have more questions than answers, but I’ve outlined them here as I’m preparing for an upcoming trip to the UK.

Do You Take Your Mobile Phone?

Most providers charge a fortune for phone service outside the US. AT&T’s World Passport package, for example, gives you 120 MB of data and $1.00 per minute phone calls for $30 over a 30-day period. Each additional MB is 25 cents. The largest plan they have is 800 MB for $120. That gives you calling at 35 cents a minute and additional data at 15 cents a MB. Those charges add up. Verizon has similar pricing– $40 for 100 MB of data. Sprint and T-Mobile have the best plans overall. They offer free 2G data roaming and calls for 20 cents a minute. You can upgrade to 4G LTE speeds for $15 and get 100 MB at that speed.

Not all Verizon or Sprint phones work abroad unless you have the world versions of their phones. You’ll usually need to be on a post-paid, not a pre-paid plan.

Pros of Taking Your Phone

The minute you arrive at your destination you can look up directions, check email or whatever. People can call you just like they always did. It’s a device you’re already familiar with and it has all your apps. If you have Two-Factor Authentication (2FA) enabled, your device is always with you for logins at unfamiliar places

Cons of Taking your phone

The rates will kill you. Yes, you can turn off data and just use Wi-Fi. If you’re lost and need directions, the odds are you won’t have Wi-Fi. If you use your phone for work (like I do) and it’s stolen, you’re out of luck. 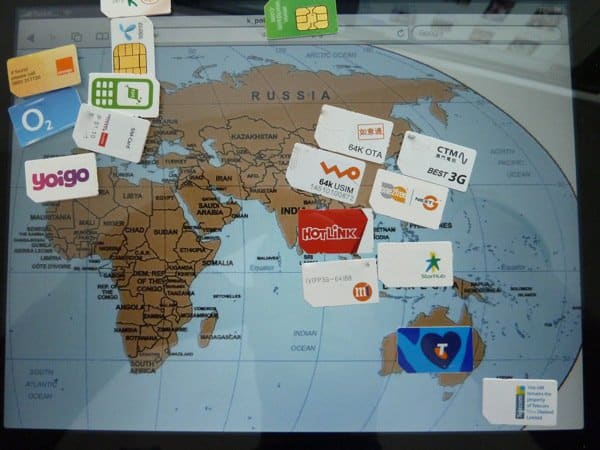 Most people I spoke with who are frequent travelers (even a travel agent) were in one of two camps. They took their phone and either took the hit on the rate or made their phone smart only on Wi-Fi. They don’t want the hassle of getting another phone. They like that everyone knows how to reach them.

Other experts say to go ahead and either bring a “burner” style phone and buy a SIM card for the country they are going too. They’ll do that in advance or when they arrive. If you do it in advance, family and friends will have a number to reach you. With a foreign number, your friends will pay extra to call you since it’s an international number. You’re shifting the burden to them (which might be nice if the boss tries to reach you on vacation).

An interesting option is to split the decision: take your phone, disable data roaming, and buy a hotspot. Just like the SIM, you can buy that in advance or at your destination.

We doing a little of everything. My phone is staying at home in the States with a friend. If I need 2FA, I can just call the friend. I purchased an Android phone (even though I’m a loyal iPhone user) and loaded all my apps. It took a few hours, but wasn’t that hard. I signed up for T-Mobile’s Simply Everything Plan and I’ll cancel the service when I get back. T-Mobile doesn’t have contracts which is nice. I can give everyone my number right now in case of emergencies.

My spouse is taking his AT&T iPhone. When we arrive, he’ll have his AT&T SIM, but will replace it on arrival with a local carrier. Getting AT&T to unlock the iPhone needed a quick call and then a visit to this site. We’re still under contract for that phone, so I’m not complaining. In theory AT&T shouldn’t mind because if we leave them, locked or unlocked, we still have to pay an early termination fee.

What Type of Chargers to Bring? 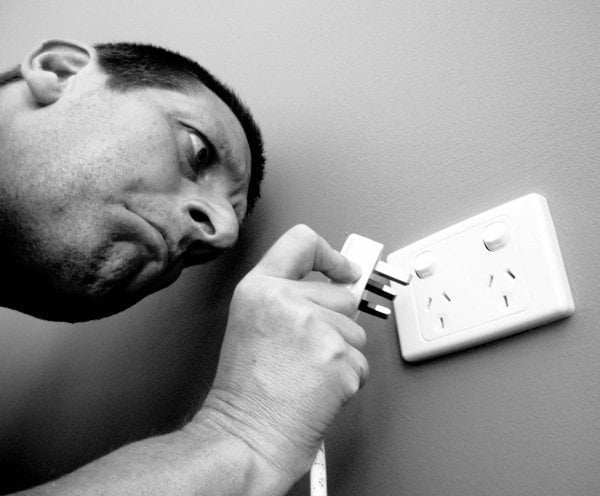 Most people know that the plugs in the US don’t match most of the rest of the world. You can’t plug in your iPhone charger into a plug in Europe. It won’t fit so don’t try. There’s really two approaches here: use an existing charger with an adapter or use a universal charger that supports USB. Most chargers for electronic devices will work with both US voltages or European ones; it’s just the shape of the plug that is different. This isn’t true for everything, so check to make sure your chargers will work with both 110 and 220 volts.

Pros of Taking Your Existing Adapter

This is an adapter you know and trust. Power adapters are cheap and friends might have them that you can borrow (unless they are traveling at the same time you are).

Cons of Taking Your Existing Adapter

The charger situation means there’s more to carry with you on your trip and more to possibly lose. If you have to buy a plug adapter, why not buy one that works everywhere? Unlike country-specific power adapters, universal adapters have USB ports and power ports that work with all power plugs. After you’re done with your trip, you can still use them in the United States. 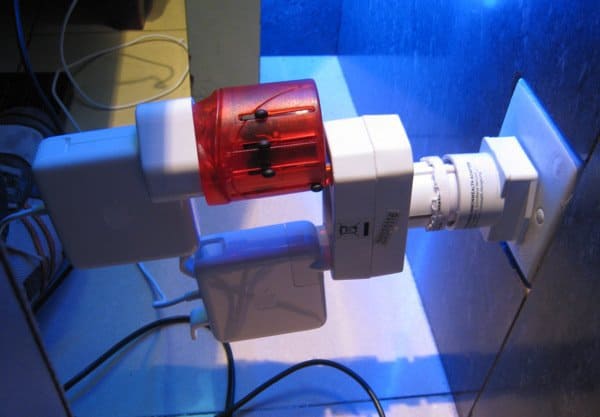 The experts told me that the biggest problem with using your existing adapter is space. Plugs are tight and the plug converter plus your adapter takes more space. With a universal adapter, you can usually do a pass through and charge more stuff. That means more outlets without having to unplug stuff.

Like most things, my spouse and I disagree. He’s borrowing a power converter and bringing his Apple adapters. I found this handy Kensington Adapter that has 2 USB ports for charging and a direct power plug. I also bought a PlugBug World. It was only $10 more to get the international adapters, and I wanted a PlugBug anyway.

Tablets (Plus a Keyboard) or Laptops? 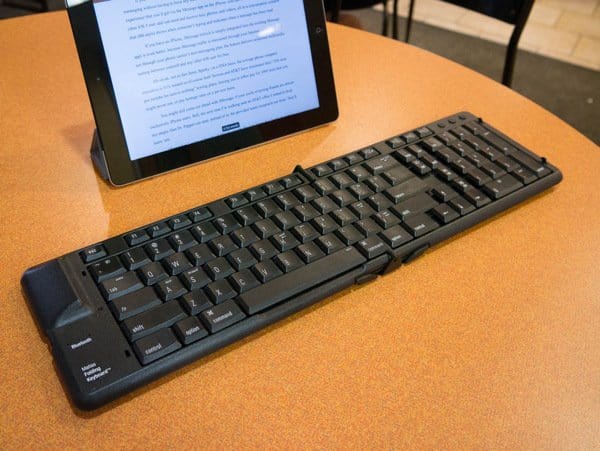 Here’s where I need some help. Tablets have a long battery life, but so do many laptops today. It’s no secret I love my Chromebook. I’ve tested and both my iPad and Chromebook get around the same active battery life. I’m torn with which to bring on my trip. I need either an external keyboard or a laptop since I need to respond to emails and maybe get some writing in.

Since I won’t have my iPhone, the iPad gives me the ability to respond to iMessage and text messages sent to that phone. I also have my iTunes music subscription so I can jam to music on the plane and other places. My portable keyboard is small and battery powered. Unlike a laptop, I don’t need to bring an extra power charger. All I need is a USB cable and I can charge it with a battery pack.

Pros of Chromebook or Another Thin Laptop

The Chromebook is about the same weight and size as my iPad and keyboard and does a ton more. I have a larger screen and a better keyboard. Some apps just aren’t made for the iPad. If a client issue comes up, I can remote control their system much easier. Although this isn’t true for all laptops, my Chromebook is about a third of the price of the iPad. If something happens to it abroad, I’m not out that much money.

I go back and forth on this. I’m already taking a plug adapter so the Chromebook power adapter won’t take up that much space. Space is still space, and with international travel every bit helps. Speaking of space, I have more storage space on my iPad for movies to watch on the plane. The iPad is easier to use on a tight plane — anyone who has had the seat in front of them recline knows this. If I turn off Bluetooth on my iPad, I’ll get an even longer battery life.

What are your thoughts? Should I take the Chromebook or the iPad keyboard. What suggestions do you have for taking your technology abroad? What am I forgetting?