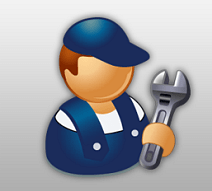 Time is running out to take advantage of the free Windows 10 upgrade from Microsoft. Let’s explore my thoughts on the pro and cons of upgrading vs. staying with your existing OS.

I started writing this article with the intention of delivering compelling reasons; why Windows 7 and Windows 8.1 holdouts, need to upgrade to Windows 10 before July 29. The problem is, only crickets kept popping up in my head. I can point to the Anniversary Update as a reason to get on board now; since it features a lot of fit-and-finish along with Dev/IT improvements. Yeah, I know, not exactly compelling. So let’s explore the argument a bit (Should you upgrade to Windows 10 or keep your old box?) and you can make your own decision if you will be upgrading or not. Would love to hear your thoughts in the comments either way! 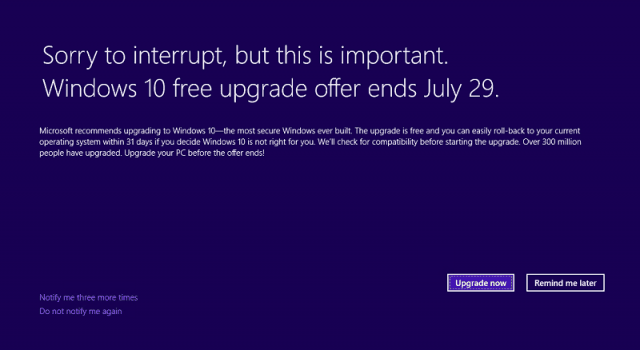 My day to day, go to operating system is Windows 10. The computer I typed this on, an HP EliteBook 8460p, has been running Windows 10 since build 9926. It is currently dual booting the public build, 1511 and the latest Windows 10 Insider Build. For me, it has been a front row seat as a Windows 10 Insider since day one, to witness this operating system evolve from its humble beginning as Windows 8.1 Update 2 into a powerful service. Sometimes, I wonder how I would react if someone told me 15 years ago, Microsoft would deliver a new revision of Windows 2 times per year. We are living in that world today, and it turns out to be not so disruptive as many probably would have thought. In fact, many of us enthusiastically look forward to it. We follow Windows Insider Chief, Dona Sarkar waiting for the latest tweet or sign of the big red button a new build is coming. That remains part of an enthusiastic Windows fan base.

The reality is, a hardcore enthusiast is likely to have already jumped on the Windows 10 bandwagon. If you have managed to let a year pass, you truly don’t want it. So apart from getting free upgrades for the life of your PC/device; what is the key value in upgrading to Windows 10? This is coming from the perspective of a user who lives in a browser, and Windows 7 is seriously getting the job done with Chrome. That user doesn’t see the point going through the hassle just to keep doing what he or she was already doing.

As a user who volunteers a lot of help and support enthusiastically, trying help fellow users through the upgrade process to Windows 10; I can say it’s not pretty much of the time. In most cases, the best Windows 10 upgrade is the one you don’t have to do. Most recently, users are experiencing a new behavior with the update, where the Windows 10 Upgrade Assistant becomes stuck at 99%. For many, they are left clueless, bewildered and most times feeling regret. Attempting a rollback can make things even worst.

For a platform running on 1.6 billion computers worldwide, yet 1.3 billion say no, says a lot, especially since it’s free. As a technology enthusiast dream, Windows 10 is great. The reality is, the majority of persons don’t care when all they want to do is reach Facebook, Instagram, and YouTube. The mobile hurricane continues to further define the direction, how users prefer to compute. Apps such as Snap Chat, Pokémon Go, versions of Facebook available for iOS and Android are lacking or unavailable on Microsoft’s mobile version of Windows 10. The ecosystem is not an excuse either because that has pretty much fallen apart with Windows 10 Mobile, not everyone owns an XBOX One or desires to own a Surface.

Thinking about this deeply, Windows 10 seems to be received best on a new device; particularly a 2 in 1, where unique platform features like Touch and Windows Ink show actual value. For someone like my brother who uses AutoCAD, Virtual DJ, Word 2013 on his cheap Toshiba running Windows 8.1 Update 1; where is the value in trying to persuade him, when good enough keeps standing in the way? The Alphabetically organized Start, Action Center, and Battery Saver doesn’t feel like solid win me overs.

I believe if your computer is working for you and getting the job done just fine, no matter the version of Windows, it is your right to stick with it. With that said, there are sound reasons why upgrading to Windows 10 is recommended. Although I have not been enthused by Microsoft’s methodology for delivering the free upgrade; I do see the benefits of that vision. Security, in particular, stands out as a significant reason for inviting the upgrade. The new agile development cycle and the changes to how Windows Updates are delivered in Windows 10 contribute to a more secure platform. This is demonstrated by the force feed nature of Windows Updates in Windows 10. Lack of applying Windows Updates in the past has been its Achilles heel. Windows 10 minimizes this problem.

I mentioned the Windows 10 Anniversary Update earlier. I have witnessed Windows 10 evolve for nearly a year; the rough edge 1507 release and the Service Pack 1 like November Update prove, Microsoft is not afraid of change anymore. The precursor to this was Windows 8.1 and Windows 8.1 with Update 1, both of which, refined the backlash the initial release received in 2012. The Windows 10 Anniversary Update otherwise known as version 1607 is what some would call the fit and finish the revision, the Windows 98 SE, the OSR2 or the Windows 7 version of Windows 10. Playing with the latest Insider Preview for the past six months on a regular basis, there is a lot to like.

Microsoft is specifically doubling down on unique features in Windows 10 such as the Cortana Digital Assistant and Windows Inking Tools. What I like the most though is the fast performance, it just feels faster, there is more common sense in the user interface, along with a fluidity that was lacking in the initial releases. The Start menu, for instance, has been revised to provide quicker access to your application library while maintaining a familiarity Windows 7 users will welcome and feel comfortable with. Apart from the fit and finish, Windows 10 still maintains a connection to the past; Internet Explorer is still there, Media Player is still there. Media Center is not there; native DVD Playback is not built in, and those are not excuses. I use VLC Player to watch all my DVDs just fine, and it works. So if that’s a reason for sitting on the fence, it is honestly a weak one.

The modern versions of apps such as Mail, Groove, Film & TV, Calendar and especially the Microsoft Edge web browser, feature significant refinements. There is a lot of synergy throughout the user interface too, for instance, the calendar in the Notification Area makes it easy to view, create and manage events. Although Edge sometimes feels like a bitter pill to swallow, there are welcome improvements. New additions include better resource utilization, pinned tabs and easier management of downloads. The biggest addition, Extensions, gives developers and users opportunities to expand the functionality of the browser. There are some small things in 1607 that make me say, why did it take this long, i.e. Mobile Hotspot.

Windows 10, when compared to previous releases, is off to a solid start. Microsoft recently announced the OS is now in active use on 350 million devices worldwide. Certainly being free has a lot to do with this enthusiasm, especially in a world where client operating systems are free elsewhere. I realize, there are the over my dead body group of Windows users who will never let go of Windows 7. At the same time, there are those who are on the fence for a variety of reasons, either it’s just too hard to do, time-consuming, compatibility, it doesn’t make sense, I live in a web browser. All those reasons have merit.

When July 29 arrives, Microsoft will have to start selling Windows 10 and it seems like doing so in today’s market will be a difficult undertaking. All the low-hanging fruits have been picked. I think if you told me Windows Vista was going to be a free upgrade for one year in 2007, that would be spectacular. In 2016, operating systems whether it’s iOS, Linux, OS X and even Windows 10 Mobile are all free; there isn’t any persuasive argument except for maybe security to buy Windows 10. Security is hardly a huge selling point considering much of the good stuff is only available in the Enterprise edition, particularly the new E3/E5 editions. I think the best thing Microsoft could and should do is keep the Home edition free forever and make Pro a premium offering. In a world where mindshare is critical, seems like the right thing to do.