The new Apple TV currently it feels like a first generation beta product. So, if you’re looking to get one, my advice is to wait. There’s not much to see here.

I got my new Apple TV today and got it set up and so far I’m not impressed at all. The first thing that was irritating is that the Remote app that includes a keyboard doesn’t work with it. 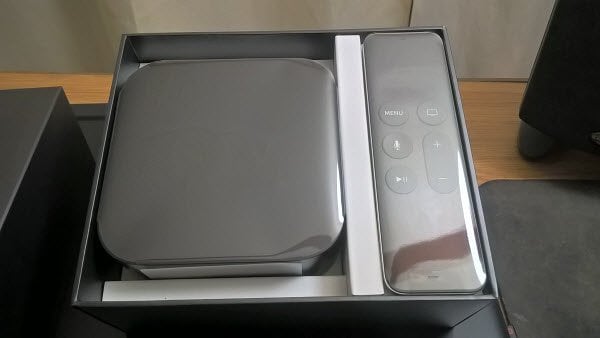 You have to redownload all of your previous channels (apps) and re-enter the sign-in credential by hunt and peck with the physical remote that is a huge time drain. Apple needs to get its Remote app working on this asap so we can use a keyboard.

It lacks Apple’s Podcasts app which one would expect to be present. The app store is currently sparse, too. The games on it aren’t impressive. The selection of titles isn’t that great, and they just feel like blown up versions of the mobile games you play on iPhone or iPad. But to be fair, that’s how most games on Amazon’s Fire TV and Google’s Nexus Player feel also. And gaming on a Roku is essentially non-existent. In fact, Roku looks to be getting out of the gaming on its set-top boxes and TVs.

The overall speed, while faster than the previous Apple TV, the responsiveness isn’t much better than my Roku 3. Amazon’s Fire TV experience is blazing fast compared to it.

It’s not all bad, though. The physical remote is decent and being able to us the touch surface to swipe (instead of hitting buttons) makes for a more fluid experience navigating through the interface.

Playing with Siri is kind of neat as well, although I would rather it be activated by a voice command like Alexa on the Amazon Echo or Cortana on Windows 10 instead of pushing a button on the remote.

It still does the things you’re used to, like AirPlay and it has Apple Music and the library of iTunes content.

The picture looks good on my 43″ 1080p screen. However, it’s not future proof since it doesn’t support 4k.

Apple touts its new Apple TV saying “The Future of TV is Here”, but in reality, this thing is going to need some serious updates before that claim can be made.

These are just my initial thoughts on it after using it for a day. I know it will get better over time. But currently it feels like a first generation beta product. So, if you’re looking to get one, my advice is to wait. There’s not much to see here.