Apple announced it is killing iTunes on its new macOS Catalina. But what does that mean for you? And what about Windows users? Here we answer what’s happening on both OSes.

The rumors started in May and were confirmed in June. After nearly 20 years, Apple iTunes received last rites and was preparing to head to the digital grave in the cloud this fall. In its place, Apple had decided to introduce three new apps, Music, Apple TV, and Podcasts.

Except none of this is true, at least not in the sincerest of terms. For Windows users, iTunes isn’t going anywhere– at least not anytime soon. For Mac users, the story is a little bit more confusing, but I’ll do my best to explain. If you’re in the latter category and don’t have the time to read further, be comfortable in knowing that the bottom line changes that are coming later this year aren’t nearly as substantial as some others might have lead you to believe. Therefore, relax and enjoy your summer.

As Ars Technica was the first to explain, iTunes for Windows will remain the same. The free software remains alive and well and will continue to be your all-in-one hangout for music, videos, and podcasts.

Apple says users of iTunes under Microsoft Windows will not see any changes. It won’t be broken up into several apps; it will work just like it does now. However, Apple did not provide any clarification about what support will be like for future features. The company says that Windows users will continue to have the same experience as before and that it is not announcing any plans to end support for iTunes in Windows.

This news doesn’t mean iTunes for Windows is going to be available forever or even into next year. For the time being, however, Apple has announced zero plans to end it or withdrawal support.

Before explaining where iTunes for Mac is going, it’s essential to take a trip down memory lane to see how the software began and evolved.

First announced in 2001, iTunes was initially designed to allow you to play, download, and organize digital multimedia files, including music and video. Early on, you could only do this on Mac, although Apple quickly expanded this by introducing an all-new mobile device called the iPod. Eventually, iTunes (which added Windows support in 2003), included audiobooks, films, television shows, then apps for iPhone (and later iPad).

Eventually, thanks to the rise of iCloud, you no longer needed iTunes (for Mac or Windows) to sync your mobile devices. Couple this with the slow, then rapid growth of streaming music services such as Apple Music and Spotify, one of iTunes’ most prominent features, the iTunes Store, has become much less relevant in recent years. Despite this, iTunes has mostly remained a bloated mess with too many features, and this has continued even after Apple’s 2017 decision to remove the App Store from iTunes.

On June 3, Apple announced macOS 10.15 Catalina. The software update, which will be available for Mac users this fall, no longer has an iTunes app. Instead, you’ll find three separate apps, appropriately named Music, Podcasts, and Apple TV. Put together, these three apps do nearly everything iTunes has performed for nearly two decades. In this case, however, Apple has largely removed the bloat.

Not surprisingly, the macOS Catalina Music app looks strikingly similar to the existing iTunes app for Mac, except it only offers music. The content includes your existing music library, sorted by artists, albums, and songs, plus playlists. If you’re a current Apple Music subscriber, the Music app for Mac is where you’ll go to enjoy your membership — just like you currently do in iTunes.

Do you still buy music through iTunes? If you haven’t yet jumped on the streaming music bandwagon and still enjoy purchasing titles in the iTunes Store, nothing is going to change when macOS Catalina arrives. As you can see below, the iTunes Store remains in the lightweight Music app. To access it, you just click on the iTunes Store on the left. 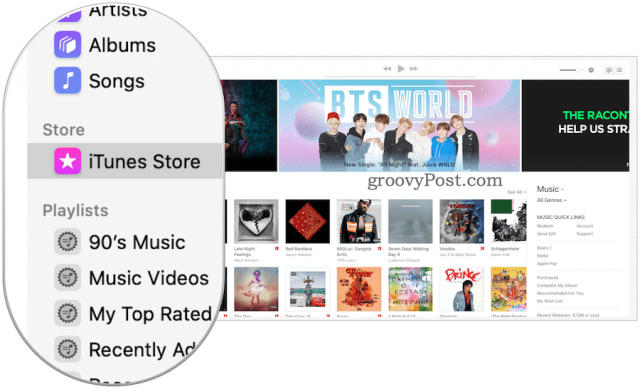 Currently, your favorite podcasts reside in the iTunes app on Mac. However, on your mobile devices such as iPhone and iPad, there has long been a separate Podcasts app. Expect something similar to in macOS Catalina.

The new Podcasts app looks strikingly similar to the Music app in its design. On the left side of the app, you’ll find two sections, Apple Podcasts, and Library. Under Apple Podcasts are links for Listen Now, Browse, and Top Charts. In your Library, you’ll find links for Recently Updated, Shows, Episodes, and Downloaded. 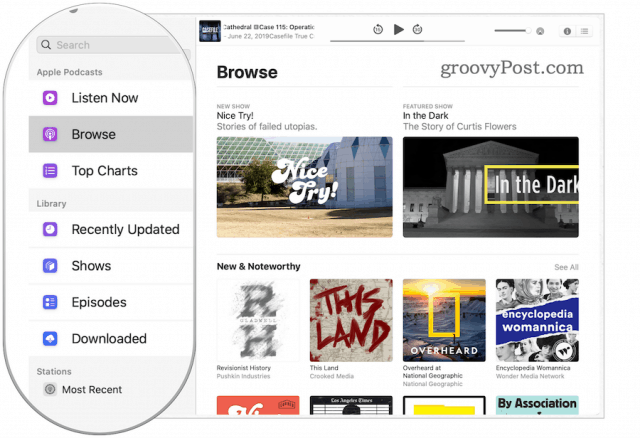 One of the most significant changes to occur between macOS Mojave and macOS Catalina comes with the introduction of the Apple TV app. Similar to the interface f0und on Apple’s hobby device, the Apple TV app offers features not available in the existing iTunes app for Mac, although some sections remain the same.

First, there’s a Library tab where you’ll find purchased content, including movies and TV shows. The content is mostly arranged by date, with the newest titles near the top of the screen.

The rest of the Apple TV app is all about streaming content with tabs called Watch Now, Movies, TV Shows, and Kids. The first of these is where you’ll find content from the new Apple TV Channels that the company announced earlier this year. These include HBO, Showtime, STARZ, and many more. When you subscribe to any of these channels, you’ll find recommended content under the Watch Now tab. You’ll also find free content from Apple that’s based on your streaming history across all your devices, including iPhone, iPad, and Apple TV.

The Movies and TV Shows tabs carry over from the existing iTunes app. The former offers titles you can purchase or rent through what was once called the iTunes Store. The latter contains TV shows you can buy by the season or episode.

Finally, there’s the Kids tab, which is precisely what it sounds like. It’s a place to find video content for kids and families, both movies and TV shows. 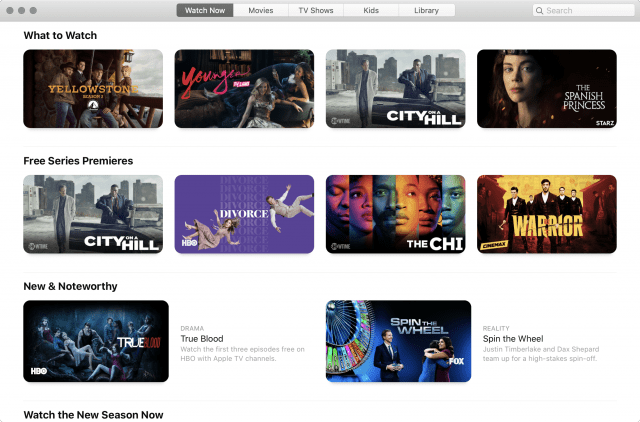 Apple iTunes is also the place where you can read and purchase audiobooks. In macOS Catalina, this content has been moved to the Books app, which is similar to how it is on iOS. In the app on Mac, you’ll find a Library, Book Store, and Audiobook Store.  On the left side of the screen under the Audiobook Store, you’ll find links for Featured content, Top Charts, Categories, and Top Authors. 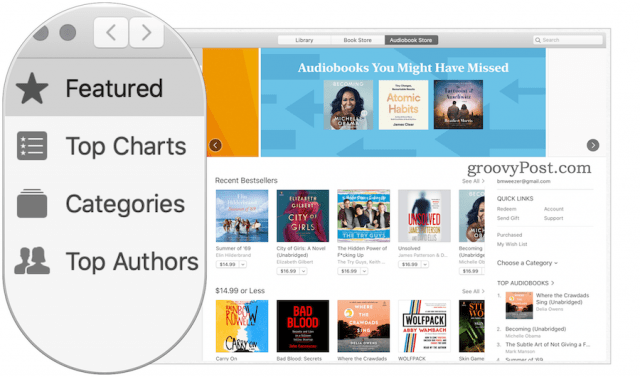 Finally, if you like to sync your iOS device with your Mac, know that you can still do so in macOS Catalina. But instead of using iTunes, you’ll use Finder in macOS each time you plug your mobile device into your computer. The actual sync process is expected to remain the same.

Apple won’t release macOS Catalina until later this year. Between now and then, Apple and third-party developers will be testing the update and make changes as needed. While it’s true the iTunes app is going away on Mac, things will mostly be the same. You’ll just have to learn to use different apps to get the same results. And just to reiterate, iTunes for Windows isn’t going anywhere, for now anyway.