The BLUETTI AC300 power station has been released and the BLUETTI AC200 MAX is back in stock, plus two new battery packs, the B300 and the B230.

Back in August 2021, we announced that BLUETTI, the portable solar storage pioneer, would soon release a new 3000W pure sine wave inverter — the AC300 and its accompanying lithium iron phosphate (LFP) battery module, the B300. I’m happy to announce that the wait is over — the new BLUETTI AC300 and B300 are available now on BLUETTI’s website for their debut sale, along with the AC200 Max, which is back in stock as of 9/15/2021. 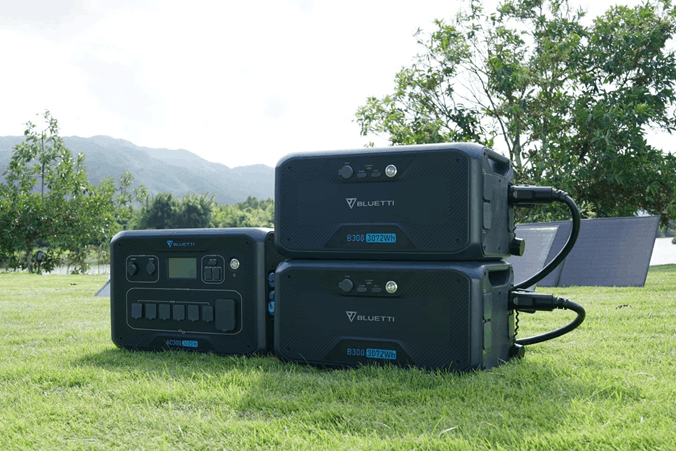 The BLUETTI AC300 is a rectangular power box with two sturdy handles on the top of each side for lifting the unit. The AC300 doesn’t come with a built-in battery pack. Instead, its modular design allows you to connect the separate heavy-duty B300 battery. With this modular design, the AC300’s weight is reduced significantly, making it a much easier system to carry when the unit and the battery module are separated. This design also allows you to easily replace its batteries as necessary.

The BLUETTI AC300 comes with a 3,000W pure sine wave inverter and a Maximum Power Point Tracking (MPPT) controller that supports up to 2,400W of solar charging. A single AC300 supports up to four battery packs for a total possible capacity of 12.3kWh. 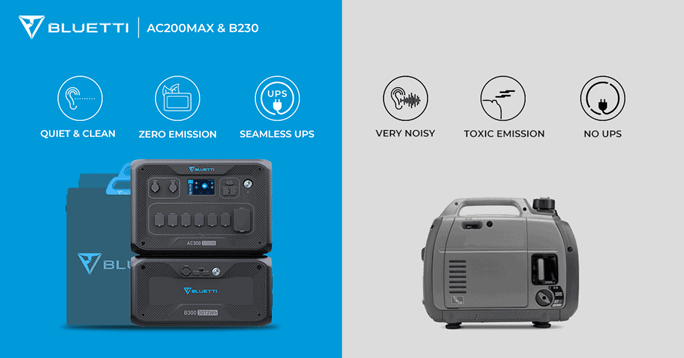 You can continue using the free energy from the sun for the life of your solar panels, which is usually about 25 to 30 years.

Save Yourself Money and Help Save the Environment

Besides saving money by using a solar generator, you’re also doing your part to help save the environment and improve your health at the same time. The noise from gas generators is annoying, but the air pollution from gas generators contributes to climate change and respiratory diseases.

Solar Generators are Lighter with the Same Amount of Power

The AC300 doesn’t come with a built-in battery. Instead, it has a modular design perfect for the heavy-duty B300 battery module that can be easily installed and removed, making it easy to move around and replace the battery. Changing a battery is easier and safer than messing around with a gas generator.

With BLUETTI’s Fusion Box Pro, you can add two AC300 units for double the voltage, power, and capacity. The dual setup can act as an emergency power center and run your home essentials for over a week. With enough solar panels, it could keep you off the grid indefinitely. 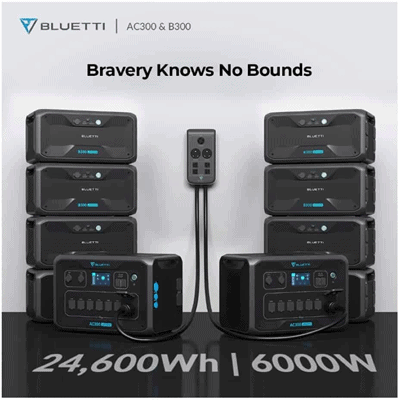 While connected to two B300 battery modules, the AC300 can be charged with solar and AC simultaneously, adding up to 5400 watts of power input.

The AC300 uses top-of-the-range lithium iron phosphate (LFP) battery cells with 3500+ life cycles leading up to 80% of the original capacity.

All of this technology can be controlled by a complex yet easy-to-use smartphone app via Wi-Fi and Bluetooth. 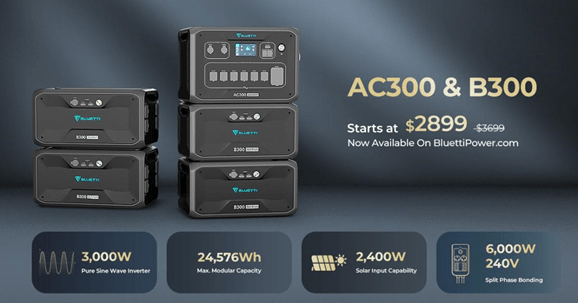 Discounts on the AC300 power module and one or two B300 battery modules are available for a limited time:

The BLUETTI AC200 MAX is Back in Stock!

The BLUETTI AC200 MAX quickly sold out when it was first released. However, both the AC200 MAX and the B230 battery modules are now available to be purchased again. 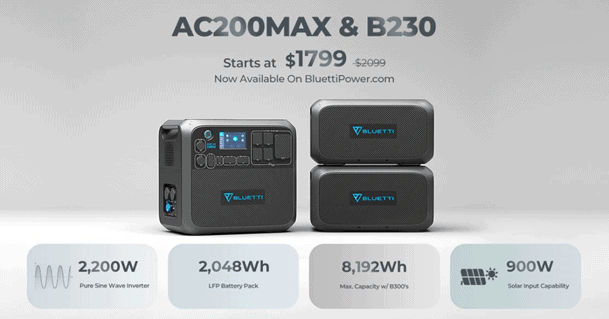 BLUETTI is offering a discount coupon on the AC200 MAX for a limited time, which brings the price down to a low $1,799, which is a $300 savings. Additional savings can be made by purchasing bundles.