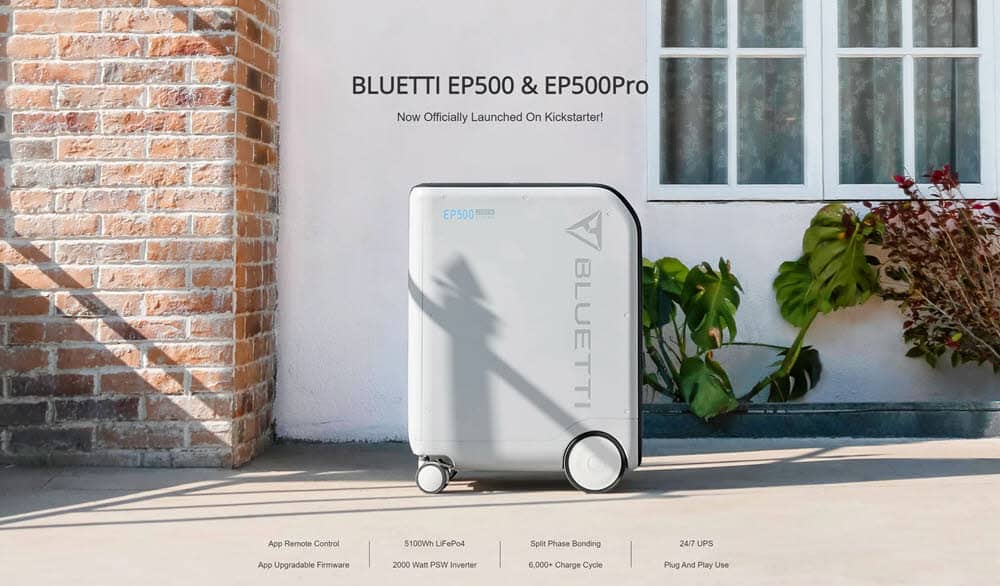 Emergencies happen, and when they do, you don’t want to be caught off guard. That’s where the BLUETTI EP500 and EP500Pro come in handy. The impressive power stations from an innovative pioneer in the renewable energy industry provide home backup power when you need it to keep you and your family safe. Both battery storage units are available now through a Kickstarter project that’s already been funded.

Providing power you can depend on, the BLUETTI EP500 and EP500Pro feature rugged hardware that’s been rigorously tested with one goal in mind: to provide power for your home and family when the unexpected happens. Ideally suited to help you get through any emergency, such as a storm or power outage, the EP500 series can provide power for up to three days for the most critical appliances in your home. These can include refrigerators, microwaves, computers, lightings, must-needed mobile devices, and more.

Unlike traditional gas generators that are noisy and cause pollution, the EP500 series is quiet and eco-friendly. Best of all, they don’t require gas and instead are solar-powered. As such, it’s fume-free with no harmful emissions and perfectly suited to lower your carbon footprint and enable both indoor and outdoor operations.

You can also use the included AC charging cable to recharge the battery pack through its AC input port. The charging speed depends on the ampere and voltage of the wall socket.

Featuring a 2000W pure sine wave AC inverter and surge up to 4800W, the EP500 is designed to cover your family’s essential needs during a power outage. The Pro version offers continuous power at 3000W and a surge capacity of up to 6000W. Both models are packed with 5100Wh based on ultra-durable and safeLiFePO4 battery cells with a cycle life of up to 6,000 cycles. Both models can provide enough energy to power your home for several days. And because the EP500 series has been designed with mobility in mind, you can also use the devices for non-emergencies, such as a camping or hunting trip. 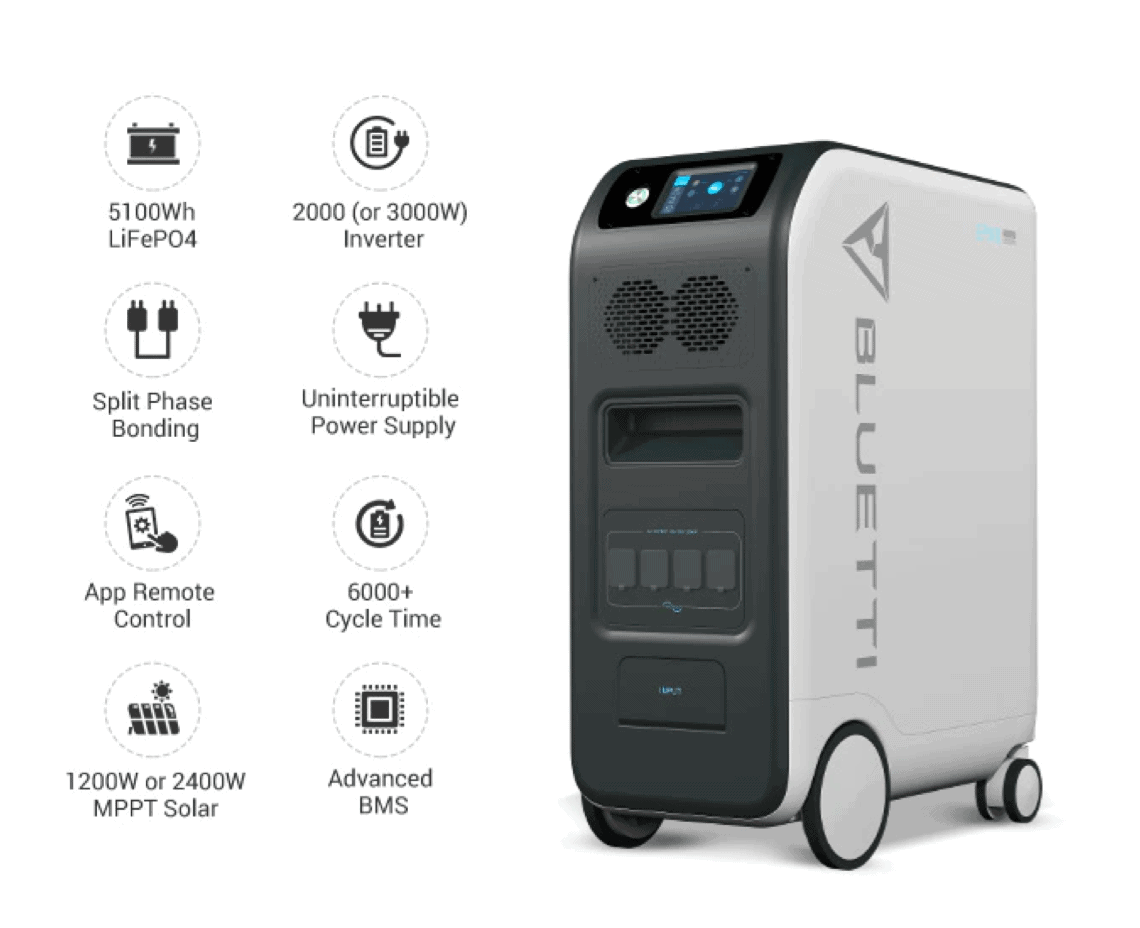 Both the EP500 and EP500 Pro come with MPPT (Maximum Power Point Tracker) control which provides up to 1200W and 2400W of Solar charging, increasing recharge speeds of up to 40% faster vs. the traditional AC input port. With the EP500, solar power charging typically takes 4.75 hours; with the EP500Pro, just 2.6 hours.

Looking for more? The EP500 Pro (only) is also chargeable using a car charger or lead-acid batteries.

For added flexibility, the EP500 series also works as a no-installation, plug-and-play mobile power station. By installing the BLUETTI Home Integration Kit, you can wire in a dedicated circuit to connect your EP500 or EP500 Pro to the building’s main switchboard. Doing so provides the most reliable supply possible by separating the availability of critical equipment and non-critical equipment.

Other Specifications and Considerations

The EP500 series weighs 180 pounds, which is about the same weight as a home air purifier. Four smooth-rolling wheels make this a “no installation needed” product for easy movement both inside and outside. With the replaceable and washable dust filter, your power station is guaranteed to work anywhere — even where sand, dust, and haze are the norm.

BLUETTI recommends its SP200 solar panel for use with the EP500. Weighing just 14.3 pounds, the unit folds up for easy carrying when not in use. It ships with a handle and zippered power to hold cables. On the backside are adjustable kickstands that let you angle the panels with ease towards the sun for maximum energy absorption.

Two is Better Than One

With a separately available Fusion Box, you can combine two EP500 series units and double the AC output power to 4000W/6000W, depending on the model. That’s enough to run high-power appliances like dryers, electric heats, and stoves. The Fusion Box only works with machines of the same model and specifications.  In other words, two EP500s or two EP500 Pros, but not one of each. 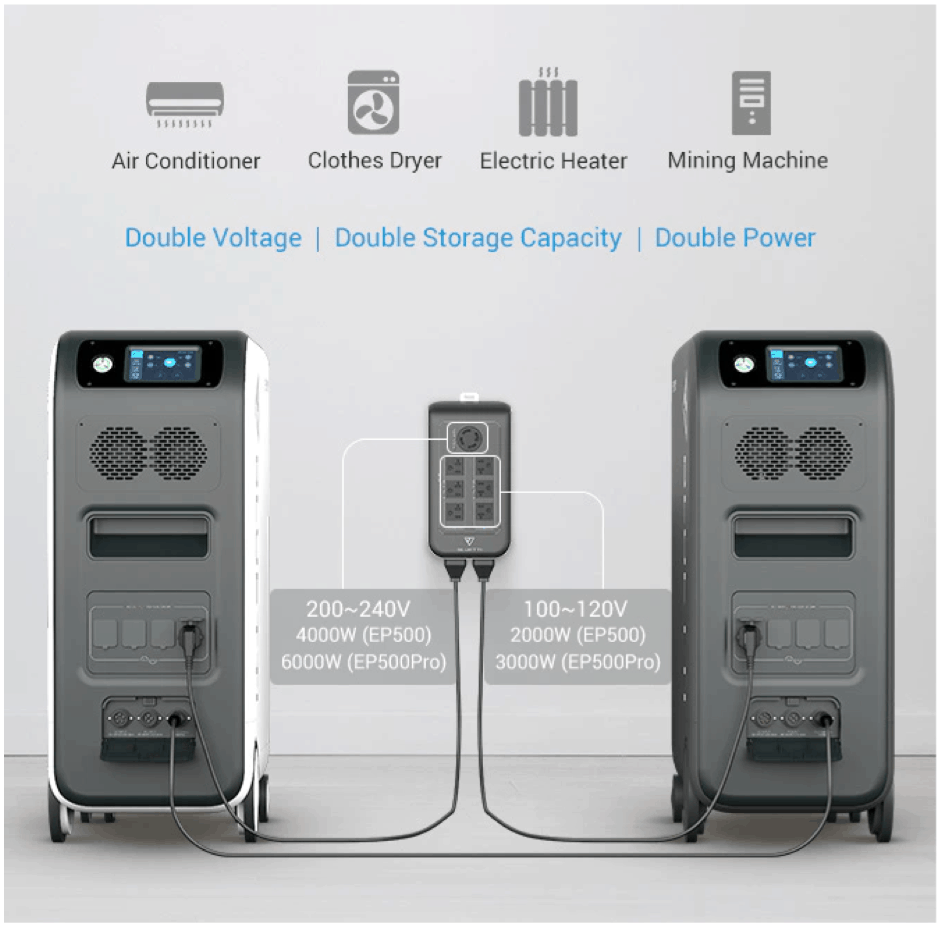 The BLUETTI team hopes to start shipping the EP500 in June, with the first EP500 models shipping in August. Each unit comes with a 3-year warranty and lifetime tech support. You can extend your warranty for one or two years for $399 and $699, respectively.  During its Kickstarter campaign, BLUETTI is offering the EP500 for a pledge of $2,799 or more, which is 30% off the regular price. You can pledge as little as $3,799 for a BLUETTI EP500 Pro Power Station.

Earlier this year, much of Texas suffered from power outages brought about by once-in-a-century cold weather conditions. Many of those folks were without power for days. For some, that meant no water or heat, no way to cook meals, and dangerously low temperatures. With a BLUETTI EP500 series, homes or small businesses could have been safe and secure. If you’ve been looking for a power station, consider the newest products from BLUETTI.