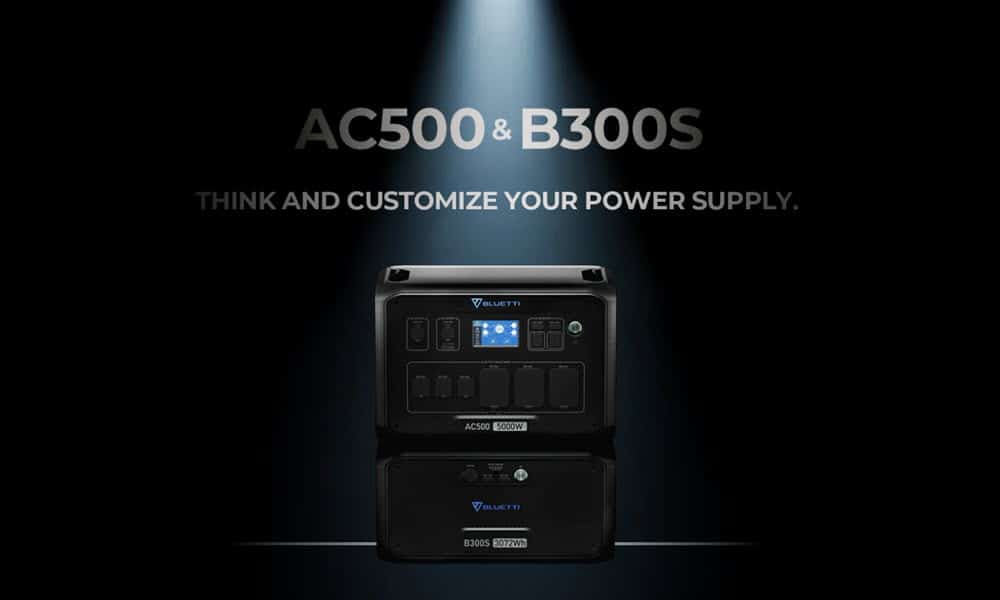 The BLUETTI AC300 with B300 battery module was the company’s first modular solar power station and proved an instant hit in the portable solar storage market. Just one year later, we’re happy to announce that their successor, the BLUETTI AC500 + BS00S combo, will soon be released on the popular crowdfunding platform Indiegogo (.

The AC500 takes everything that made the AC300 such as success and adds even more power, making it BLUETTI’s most powerful inverter yet. The Indiegogo release will give you the option to be one of the first to get your hands on this next generation of solar power station and take advantage of early bird pricing.

BLUETTI AC500 Specs at a Glance

The BLUETTI AC500 builds on the success of the popular BLUETTI AC300 3,000W pure sine wave inverter and adds even more power. Although not available for purchase yet… be the first to get notified by subscribing to the BLUETTI newsletter.

Here’s a quick glance at some of the key specifications of the AC500: 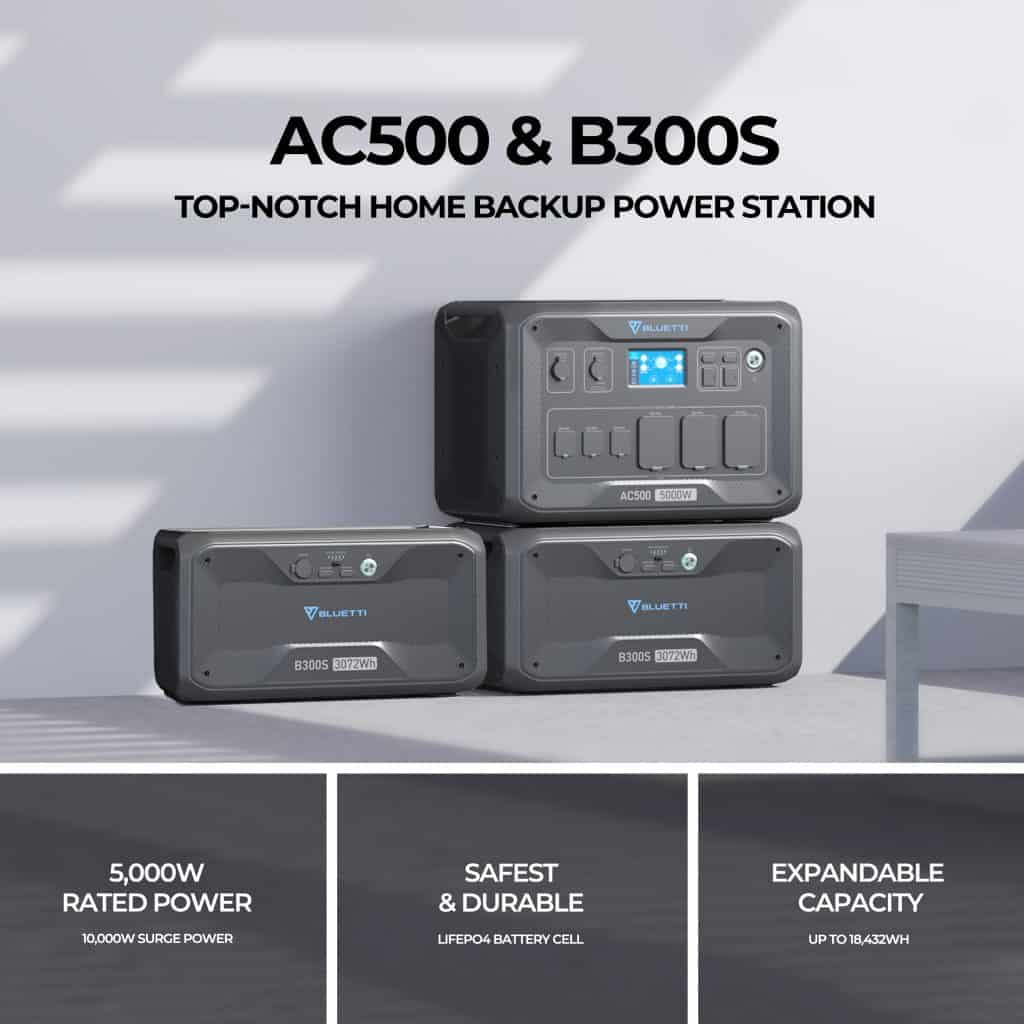 A Leap Forward in Power

This means that the AC500 makes a great option for providing backup power for your home. It’s more than capable of powering your household appliances, from refrigerators to dryers.

You can couple the modular BLUETTI AC500 with up to six BLUETTI B300S battery packs for a capacity of 18,432Wh.

If you’re looking for even more capacity, then by purchasing the BLUETTI Fusion Box Pro, you can connect two AC500 modules together in series, each with up to six B300S batteries. That gives you up to 240V/6,000W output and an enormous 36,864Wh capacity.

This is enough to keep your home essentials running for days or even weeks. Combined with solar panels, you can power your road trip, outdoor camping, or even your entire home. The BLUETTI AC500 & B300S system can help you realize true power independence. 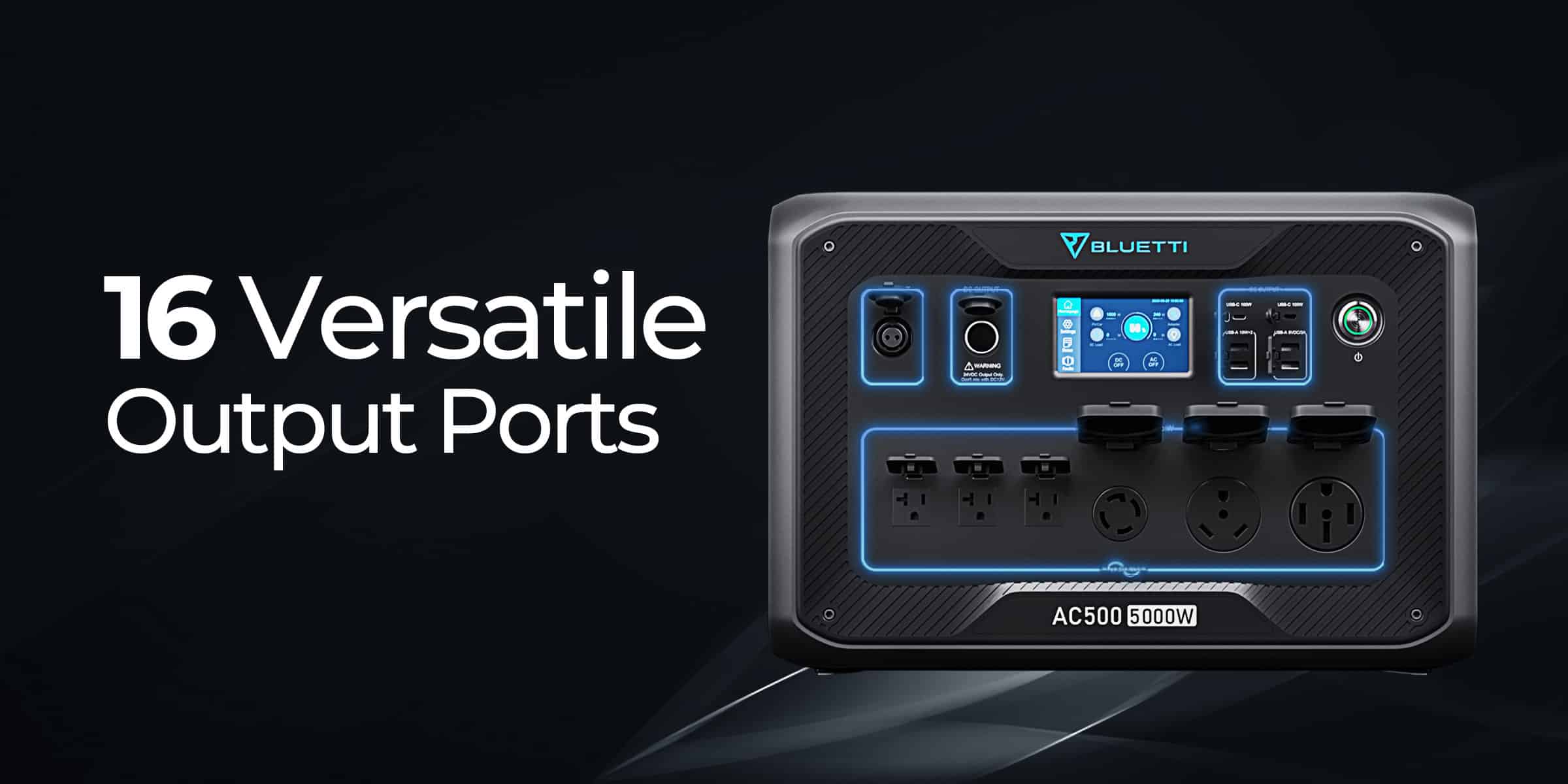 BLUETTI’s LiFePO4 batteries are durable and reliable. They can handle more than 3,500 charging cycles, up to 80% of the original capacity.

You can expect more than ten years of service from these LiFePO4 batteries, putting them well ahead of the lithium-ion batteries used by most power banks on the market today.

The BLUETTI AC500 may offer serious power, but that doesn’t mean you’ll need to spend hours and hours charging it up. That’s because thanks to its multiple charging options, you can reach a maximum 8,000W input. 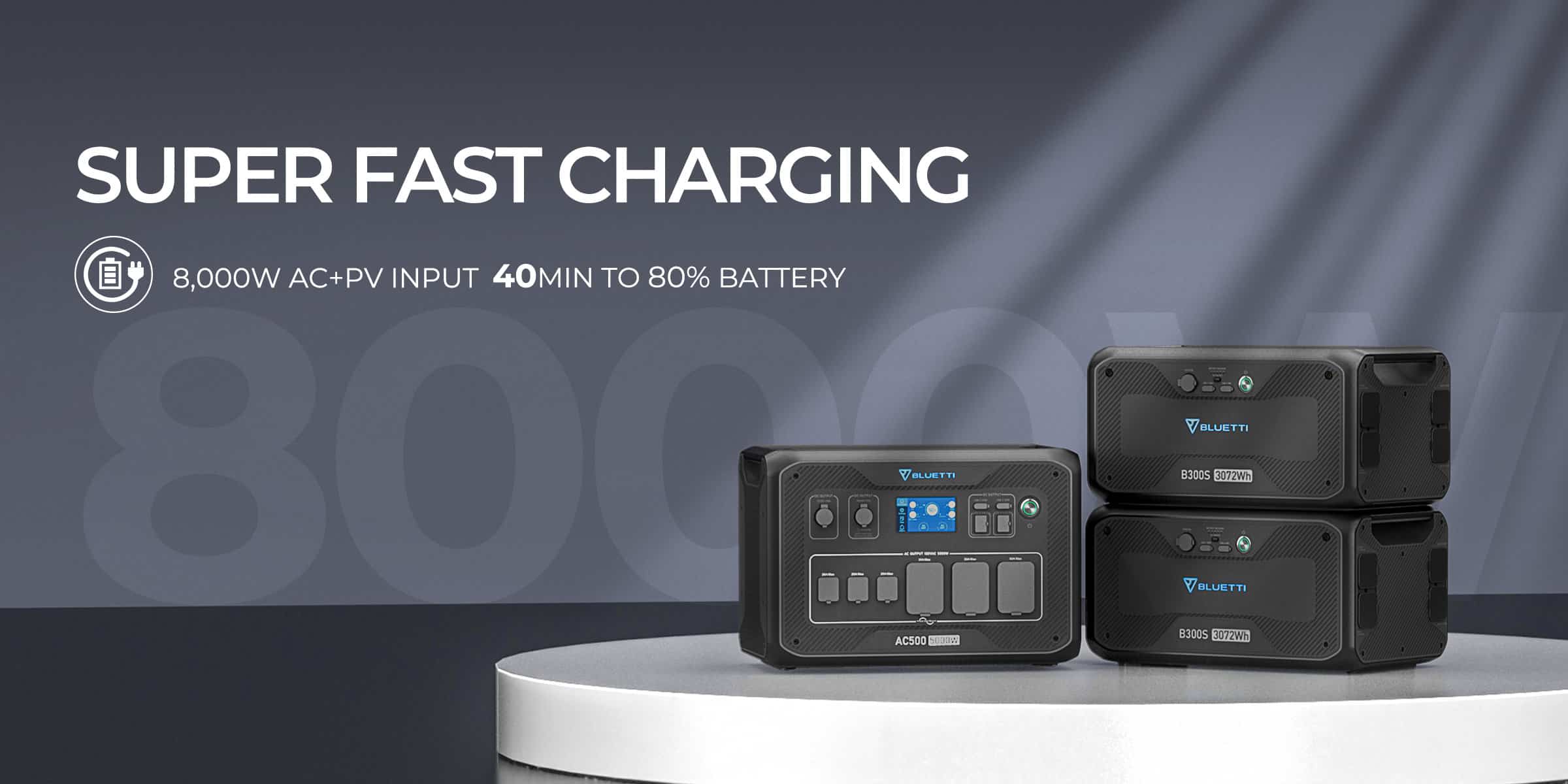 By plugging into a wall outlet and solar panels simultaneously, 8,000W AC+PV dual charging could charge up a BLUETTI AC500 with two B300 battery modules in little more than an hour.

As well as AC and solar, you can also charge via a lead-acid battery, a generator, or even the cigarette lighter port of your car.

The BLUETTI AC500 features an Uninterrupted Power Supply (UPS) system that keeps your home protected in the case of a power outage.

The AC500 can automatically detect a blackout the instant it occurs and take over the power supply in as little as 20ms. This ensures that you don’t have to worry about damage to your hardware or losing any data should a power outage occur.

Control the BLUETTI AC500 by App

Controlling the BLUETTI AC500 is simple, thanks to the BLUETTI app. You can remotely control your AC500 from your smartphone, making it simple to power your system on and off or check the state of charge. You can even update the AC500 firmware directly through the BLUETTI app.

When is the AC500 Released?

The BLUETTI AC500 is due to be announced shortly on Indiegogo. If you want to be one of the first to get your hands on this fully upgraded successor to the AC300, then subscribe to the BLUETTI newsletter. You’ll be kept up to date with the latest information on the BLUETTI AC500 and will also be eligible for an early bird discount.

The all-new BLUETTI AC500 combined with B300S battery modules creates a modular power station that can more than meet your energy storage needs.

For more information or to sign up for the BLUETTI newsletter, visit https://www.bluettipower.com/pages/ac500b300s.