SkyDrive, Microsoft’s addition to cloud storage apps, is now available for Android. It’s great for accessing stored files on the go. The app is free and you just need to sign in with your Microsoft account to access your files.

SkyDrive, Microsoft’s addition to cloud storage apps, is now available for Android devices running Gingerbread or higher. It’s great for accessing stored files on the go. The app is free and you just need to sign in with your Microsoft account to access your files. And it’s a viable option for those who want a cloud service that’s streamlined to their computer’s operating system. It’s a great service, but it has been slow to gain the popularity of other services like Dropbox, Google Drive or Box.

The overall design of the Android app is taken from the streamlined Windows 8 interface. Files are categorized into neat tiles (or thumbnails for photos) that can either be viewed in a grid or list style. Files can be selected by tapping directly on them and you’re given all available options such as Share link, Download to Device and Delete. You can also edit an entire folder by switching to list view and checking the box beside a folder name. The Add Folder button is also accessible from the bottom menu bar at almost any screen in the app. 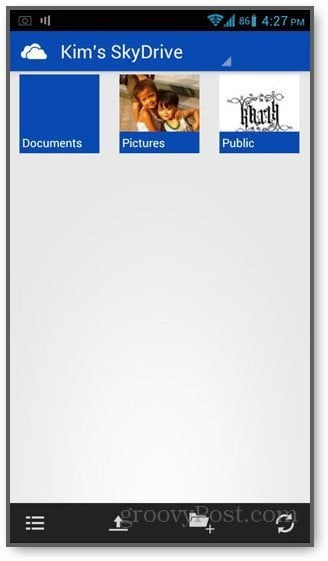 File transfer is surprisingly fast with SkyDrive, even with an average Internet connection. I was impressed to see files I uploaded appear in my desktop’s SkyDrive folder in under a minute. I’m a heavy Dropbox user too, but I must say it now feels a bit sluggish in comparison. The fact that I have more files stored on Dropbox may or may not be a factor.

In terms of storage space, SkyDrive starts you off at 7 GB – which is more than Google Drive’s 5 GB and Dropbox’s 2 GB initial offering. Of course, if you’ve been using it since the beginning you should still have 25 GB of storage. Either way, it’s an enticing free cloud storage service. If you need the maximum amount of space for the price of none, this app is a good choice. 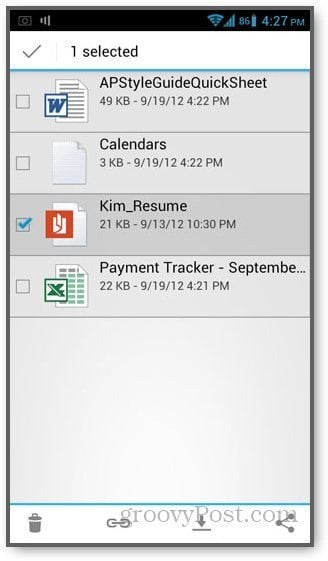 There are two things that users will miss out on. Automatic syncing for camera photos (Dropbox) and editing MS Office documents in the cloud (Google Drive). I was so used to automated syncing by Dropbox that it was a huge disappointment to not see it as a basic function. You’ll need to manually choose and upload files from your phone. This may be fine for some, but others who depend on Dropbox’s automation may not be so pleased. Also, if you want to edit MS Office files, you’ll have to use a third party office solution such as ThinkFree Office. You’ll also need to upload the revised document since it doesn’t sync the changes either. 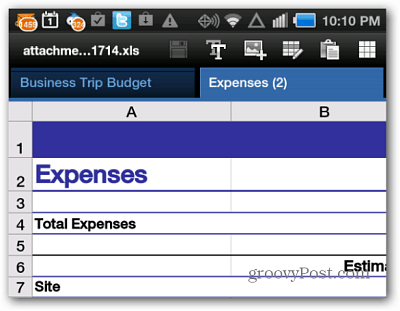 While the SkyDrive experience is seamless when working in the Microsoft ecosystem, on Android devices there’s a bit more work involved and some features are missing.

There are more feature-packed apps for Android cloud storage services out there, but with a fuss-free interface, fast transfers and a generous amount of storage space, I’d say it’s off to a good start.