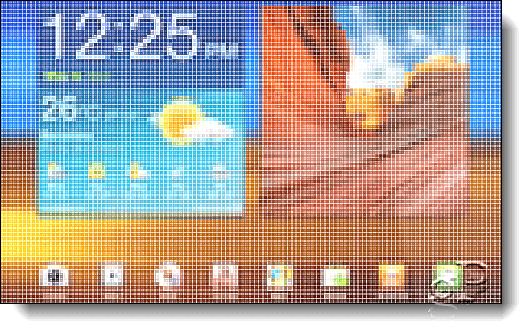 In this very hot, ultra-competitive category, an outstanding display is the single best way for manufacturers to make their tablets stand out,  says Dr. Soneira, the president of Displaymate Technologies and easily the country’s foremost expert on video displays.

“On the flip side,”  he says,   “cutting corners, costs and quality for the display is a serious mistake because it results in sub-standard image for everything that runs on the tablet.”

Using his company’s namesake product, DisplayMate, Soneira  recently tested five leading tablets: Apple iPad2, Samsung Galaxy, Motorola Xoom, Asus Transformer, and Acer Iconia. (Tests took place before the Kindle Fire was released.) When these five tablets are viewed side-by-side, the differences in their displays are blatantly obvious, Soneira says.  Then, testing with Displaymate, which is designed to analyze and calibrate video displays, revealed what’s behind those differences and what consumers should look for–and avoid–when shopping for a tablet.

Here are the conclusions Displaymate’s analysis and numbers lead to:

The iPad 2 has an in-plane switching display, which uses two transistors to control color compared to the one transistor in conventional LCDs. This makes for a wide viewing angle, but requires a stronger backlight, which is a drain on the battery. It has a higher pixel resolution but a much lower pixel density of 132 ppi due to its much larger screen size. The iPad 2 IPS LCD display is well calibrated and delivers bright images with excellent contrast, reasonably accurate colors.

Viewing the screen from the side reveals small color shifts and a large decrease in brightness, which is the case even for the best LCDs, Soneira notes. A major shortcoming is a reduced color gamut, but the iPad 2 improves on-screen image color saturation by steepening its intensity scale   a simple trick that is also used by the Galaxy Tab. The other displays fail to implement this–and the Motorola Xoom does the reverse.

The Asus Transformer has an IPS LCD like the iPad 2. It s not, however, as bright or as well calibrated as the iPad 2. Still, it delivers good performance including good contrast, reasonably accurate colors and the same excellent viewing angle as the iPad 2. But the Transformer’s screen reflects 66 percent more ambient lights than the iPad 2. It has an 18-bit color display, producing 24-bit color by using dithering.

The display on the Motorola Xoom doesn’t match the screens on the other tablets. This partially is caused by poor factory calibration. Colors and color saturation are much worse than the other displays, and the variations caused by the viewing angle are awful. The Xoom screen reflects 49 percent more ambient light than the iPad 2.

The Xoom also has a dynamic backlight that varies the screen brightness in a peculiar fashion–it slowly dims the screen to about 60 percent of the average overall brightness level of the screen and then just stops. This makes dim images dimmer.

The Acer Iconia A500, like the Motorola Xoom, also exhibits inferior performance, but it s better in a few decisive categories and is better calibrated. It was the definitive leader in contrast ratio. It s extremely dark black gives it a ratio more than twice that of any other tested tablet.

Soneira triple-checked this with some special DisplayMate test pattern measurements to make sure that it wasn t due to a changing backlight. But it really has a true, very dark black, which is most noticeable in a dark room. Unfortunately the depth of black decreases rapidly as the viewing angle expands. The Iconia also had a nicely calibrated intensity scale, Soneira said,  but it would actually have been better off with a steeper intensity scale in order to increase color saturation in the same fashion as the iPad 2 and Galaxy Tab.

The Galaxy Tab display has a plane-to-line switching LCD, which is Samsung s version of IPS. It performs comparably to IPS–sometimes a bit better and sometimes not. It s an impressive mobile display with a lot better standout performance than all of the other Android tablets–except in one important category.

“If you like to watch your HDTV with the color saturation control set to maximum then, you will be right at home with the Galaxy Tab because Samsung has turned the color obnoxiously high with no way to lower it,”  Soneira says.

“The screen is tolerable for images that don t have much color to begin with, but it hurts to look at images that have strong color content,” he says. “Moderation rather than the sledge hammer approach to color would have resulted in an outstanding display. This could be fixed easily with a software update by adding a color picture control that lets users adjust the color to their liking.”

And the Winner is ….

Although the iPad 2 display easily outperforms all of the previous Android tablets, in the new Galaxy Tab 10.1, Samsung has delivered the first Android tablet with an impressive, potentially outstanding display. The Samsung ruins it by turning up the color to intolerable levels   apparently, Soneira says,  in an effort to blatantly stand out from the other, more subdued mobile LCD displays. In the case of color, too little is a lot better than too much.

That leaves the iPad 2 still delivering the best color picture quality and accuracy of all of the tablets, even though its colors are more tame.

As things stand, based on all of the display tests, the iPad 2 and Galaxy Tab 10.1 are reasonably close in performance in most categories. So it s almost a tie. Almost. The Galaxy Tab is ahead in more categories than the iPad 2, making the Galaxy Tab the winner, by a nose, Soneira says.

Coming in a solid third place is the Asus Transformer, which delivers very good display performance across the board, all the more impressive because it is $100 less than the iPad 2 and Galaxy Tab, and $200 less than the Motorola Xoom. Next is the Acer Iconia A500, which has a display that is somewhat similar in performance to the last place Motorola Xoom, but is better in a few decisive categories and is much better calibrated. It s $50 less expensive than the iPad 2 and Galaxy Tab but $50 more than the Asus Transformer.

And finally, the Motorola Xoom comes in last place   like the Acer Iconia, it s not a horrible display but definitely significantly below the display quality of the iPad 2, Galaxy Tab, and Asus Transformer. This is all the more surprising because the Xoom is by far the most expensive tablet, and Motorola previously included an outstanding display in the original Motorola Droid Smartphone, which still delivers the best picture quality of any mobile display Soneira has ever tested.

“So they once knew how to deliver a great display,” he says. “This time it seems they just settled for a cheap, low-end, poorly calibrated display.”

Too Much, Too Soon?
How could there be such a large disparity among these five displays in such a highly competitive market? The price points are all reasonably similar; so that’s not the primary factor.

One major issue is the manufacturers are all scrambling to get their products to market, and  so there isn t enough time to properly engineer everything,  Soneira says.  But the biggest factor is becomes the explosive growth in the demand and volume of mobile displays. So many existing and new factories don t have the time and/or expertise to properly manufacture and calibrate all the displays they re producing, he says.