If you’re not using Tweetcaster for Twitter on your Android device yet, you’re missing out on a lot of features not available on the official Twitter app. The latest update includes the tweet scheduling service buffer.

If you’re not using Tweetcaster for Twitter on your Android device yet, you’re missing out on a lot of features not available on the official Twitter app. It’s a Twitter client that lets you use the old retweet method, edit who you see on your feed using the Zip feature, download photos and a bunch of other handy features. 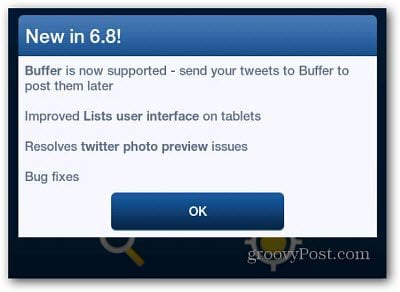 The latest update (version 6.8, requires Android 1.6 and up) has another cool trick up its sleeve — Buffer integration. Buffer is the popular tweet scheduling app that’s fast becoming an essential Twitter management tool. It allows you to schedule your tweets at certain intervals during the day. This is usually done with the aim not to look like a spam bot, and at the same time maximize your audience and readership potential.

Before the update, you can schedule tweets at a later time within the Tweetcaster app using the Post Later feature, but it won’t send unless your phone is connected to the internet when it’s time to send the tweet. Buffer solves this problem. With the Byffer app, scheduled tweets are sent to its web server until it’s time to send them out — no need for your phone to be online. To sign up for this service you can visit Buffer’s website – it’s free! You can then go ahead and configure your Buffer schedules. When you use Buffer to send tweets, it automatically follows that schedule.

To use Buffer with Tweetcaster, create a tweet (or retweet something). Don’t hit Send just yet. Beside it, there’s a dotted line – tap on that. It will give you an option to Add to Buffer. 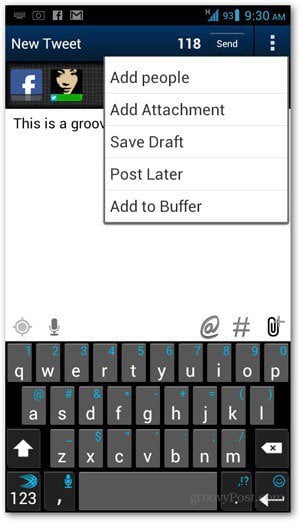 If you’re doing this for the first time, it will launch the log in screen for Buffer – either log in using Facebook, Twitter or your Buffer account. Once you authorize your account, you’re all set. Tweets are sent even when you’re away from your phone or computer, and even when you’re sleeping.