Are you trusting enough to leave your Android device unprotected? TrustGo is a free Android Anti-virus suite with more features than many of the paid competitors.

Earlier this month we ran a series covering the most popular free Android Security apps, and then compared them to see which one was the best. TrustGo Antivirus was an app that we overlooked at the time and after testing it out I found that it is better than many of the competitors. The app runs smoothly, doesn’t have any nasty pay wall surprises, and has built-in system utilities.

So, what features does TrustGo Mobile Security offer to users? Here’s the list:

Below we’ll go through and analyze each feature.

TrustGo’s anti-virus/security scanner is what you would expect on Android. It scans apps, all of the apps and nothing but the apps. This is the trend I’ve seen in every Android security suite. Of course, there haven’t been many reports of the Android file system being infected, so scanning it might not be necessary quite yet. The most common infections come from users downloading malicious apps. But, Google has cracked down on those in the Play Android Market with a virus scanner of its own. So if you ask me, as long as you stick to downloading apps from the Google Play market (or Amazon) then an Android app scanner is just an extra drain on your battery. The app does have a schedule scanner that can help with battery loss by only scanning the phone at night; when you’re likely to be asleep with the phone hooked up to the charger. 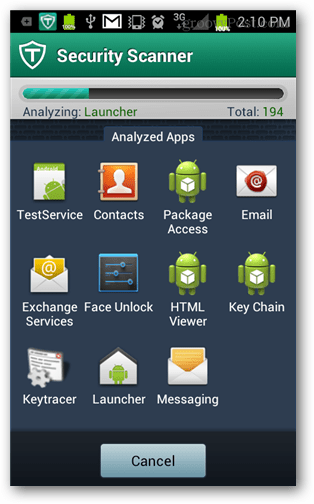 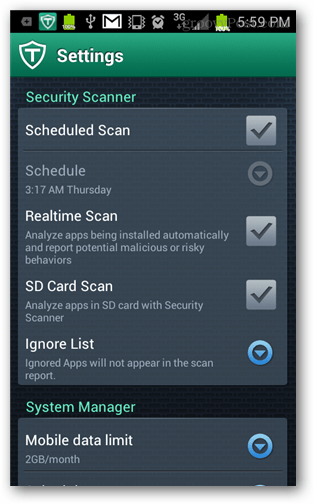 The system manager includes an App Manager and a Monitor module. The App Manager is pretty much the same thing you see in the stock Android interface, but it’s nice to have it all-in-one here. The Monitor module lets you keep track of how much data you use every month, what’s using up all of your battery, and how much memory your phone is using. I like that it lets you force kill all of your background apps and free up memory.

I don’t like that the data monitor doesn’t support decimals in the amount of GB. This means that if I have a data cap of 2.5 GB, I have to first convert it to MB and then enter it in. Such a conversion can be a pain for anyone without a calculator and knowledge of how many MB are in a GB. For example 2.5GB = 2560 MB. It’s not a big deal, but it’s one of those little details that wouldn’t be difficult to fix. The monitor also doesn’t cut off data on your device once you hit the limit, it only notifies you if you’re nearing the cap when you reach 90% of the monthly quota.

The Data Backups system works quite well. It will backup Contacts, Text Messages (SMS) and Call History. This will probably be my go-to app for backing up all three of these before flashing the phone to a new rom, or switching to a new phone. TrustGo has a great privacy policy in its Terms of Service where it promises that the data you backup is encrypted and never shared (unless required by law, etc.). It won’t backup picture messages, but it does encrypt all of your data using AES 256-bit over HTTPS. Currently, TrustGo supports unlimited data backup, but that may change as Jerry Yang, VP of Engineering, stated they might need to “Set a limit in the future as we add new items users can back up.” 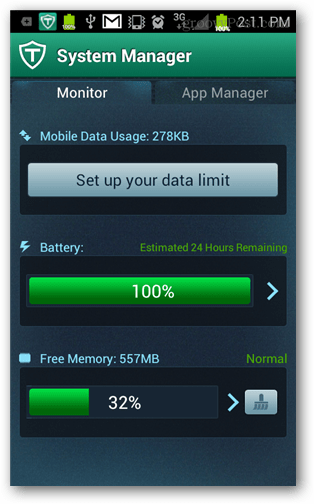 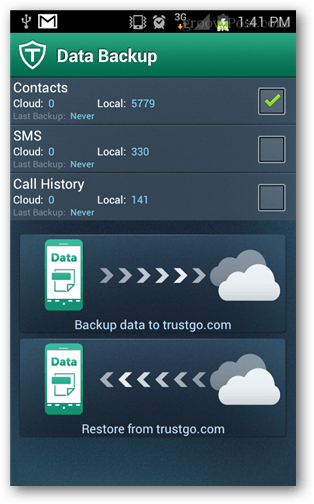 TrustGO has an interesting feature that I haven’t seen in other Android security apps. It provides a buffer between you and the Google Play Android Market with its app search functionality. When you use it to search for an app it will display green “Certified” text next to some of the apps. Those with the Certified logo have been tested by TrustGo and deemed completely safe to download. But, it doesn’t rate apps based on privacy invasion where an app can track your personal data. So overall it’s just a proactive anti-virus scanner for the Google Play market.

The Secure Web Browsing feature works with the default Android Web browser and checks each URL you visit against a database of sites known to try to infect your phone with malware or steal account passwords. To test it out you can try visiting:

from your Android phone. 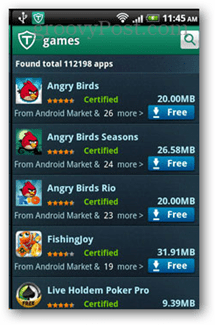 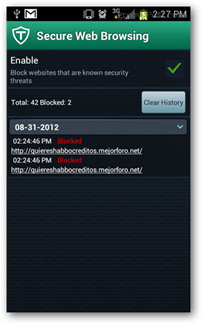 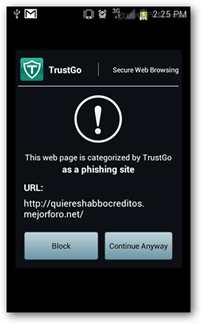 The Privacy Guard doesn’t do much. It just displays which permissions are granted to every app you have installed on your Android phone. Apps are categorized based on what permissions they have granted. After looking through it, I can’t help but feel a bit paranoid that a dozen different apps have access to my contacts list. 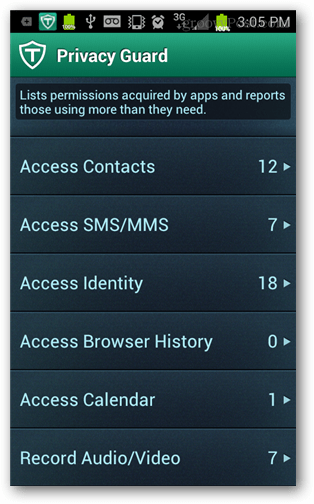 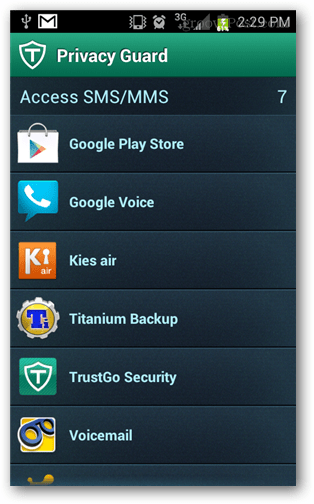 Self Protection and Search History Eraser

In the app settings screen, you can set TrustGo as a Device Admin. This means that the app can’t be uninstalled until it is removed as a device administrator. This also means that the app can perform Factory Resets on your phone or change the screen-lock password. I noticed that the remote phone-lock feature doesn’t work that well unless you activate TrustGo as a Device Admin. Without the enhance permission, the normal remote lock still lets a phone hijacker access the home screen and notification bar.

The Clear Search History button is just a nice bonus feature the app has — available only in the settings menu. 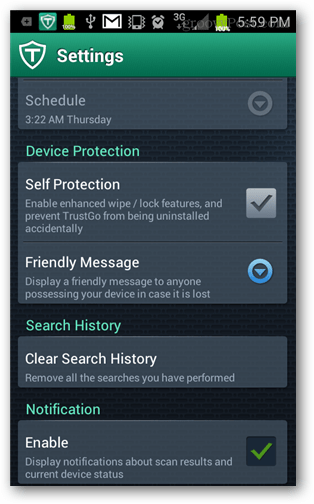 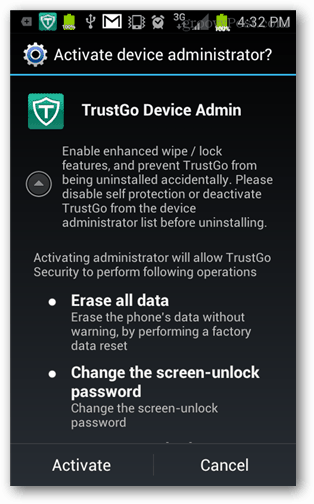 This is my favorite feature in any Android security app. It’s simply a must-have for all Android phones. If you don’t have this set up on your phone, you need to get it, regardless of which app you use to set it up. TrustGo’s Device Protection feature lets you log on to its website and access your phone’s precise location. For accurate location positioning, however, it does require that the internal GPS be left on at all times. This can be a battery drainer, and there is no remote method for turning the GPS on within TrustGo. 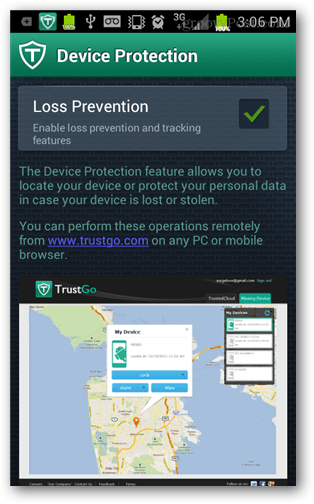 Below is a screenshot of the Missing Device manager on the TrustGo website. If GPS is enabled it will pick up the exact coordinates of your phone on a Google Map. It can also remotely lock the phone, sound an alarm or perform a factory reset. 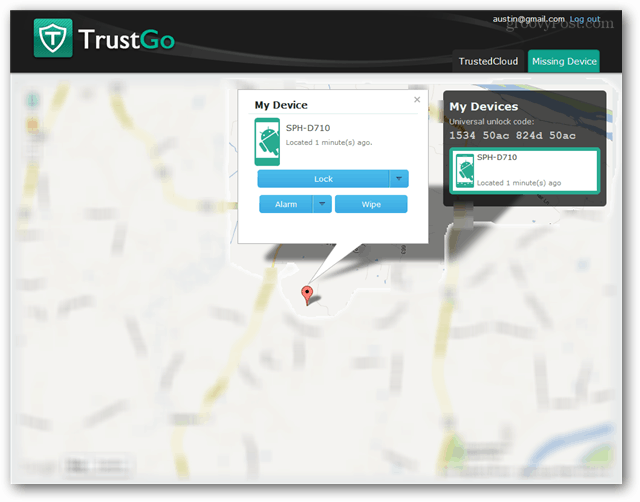 Unfortunately, I couldn’t get the Candid Camera feature to work on my SPH-D710 (Samsung Galaxy II Epic Touch). However, it should work on most other phones. The method it uses as described is once your phone is locked, if someone enters an incorrect unlock code 3 times, it will then use the front-facing camera to snap a picture of the attempting intruder. While this feature is useful under the ideal circumstance that a phone thief would do this, I would much prefer to it happen on the first unlock attempt. Or better yet, add a remote command so that photos can be taken by the phone owner.

Overall TrustGo is a solid Android security app. Although I like it, it has ways to go before it can compete with the best free Android anti-virus app in terms of features and device recovery. But, because it’s so easy to setup and use, I would recommend TrustGo to anyone with an Android phone who might not be savvy enough for some of the more advanced alternatives. Despite being free, I’d still rank it higher than nearly every paid alternative available on the Market in terms of features, ease of use and performance.