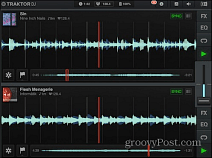 One of the apps available for free in the iOS App Store is Traktor DJ by Native Instruments. It’s a quality app normally priced at $20, 8bitjay takes a look.

In celebration of the fifth anniversary of Apple’s App Store, the folks at Cupertino made several popular App Store apps available for free. One of those is Traktor DJ by Native Instruments. I use a lot of Native Instruments stuff for my music. It’s great stuff. By the way, check out my studio series, here. 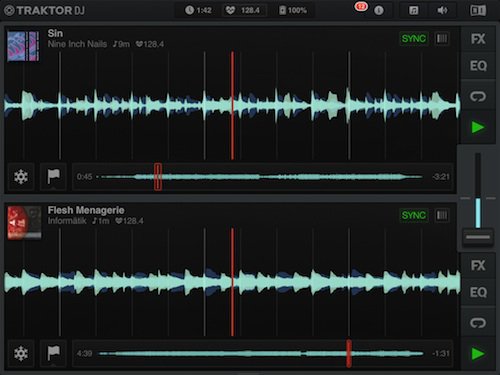 Before we get started, I want to stress something very important. I am not a DJ. I have never DJ’d, nor am I interested in doing it. Since the app is free, I figured I’d give it a whirl. Many people think that an electronic musician is a DJ. I create my music from scratch. DJing means you take popular or known songs and put them together while hoping that people keep dancing and have a fun night. 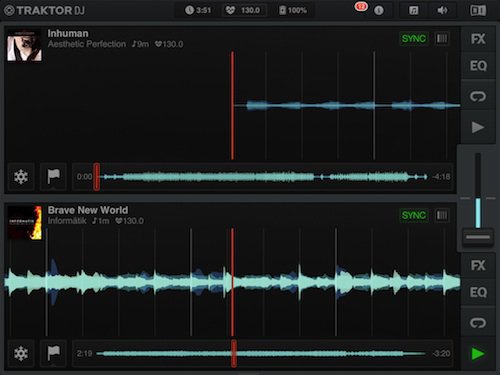 Traktor DJ is an iPad app for folks who want to DJ or learn how to DJ. It’s pretty simple to use. You have two tracks. You insert a song to each, and set them up so that their beats match. This is as easy as hitting the “Sync” button at the top of each track. Just be careful, because if you go from an incredibly fast song to a much slower song, the slow song will speed up when you sync it. This may sound awkward. It won’t be a chipmunk voice, but it will seem faster than it should, which may sound off to listeners familiar with the track. They will say, “Is this song playing faster than it should be?” Know that this will also happen if you have to add some major slowdown to a faster song.

Normally, you will queue up two songs to start. Adjust the fader so that you can hear the song you want to hear first and hit the play button. It will begin playback. When the sync buttons are green, that means that the songs are tempo-matched.

From there, you can start up the second song. It will begin playback, and you use the crossfader to transition to the new song. You just have to make sure it’s smooth and doesn’t break up the feel. Too many inexperienced DJs do that, and they don’t beatmatch. What you end up with is a crowd that kind of has to stop and readjust or pause for a second as the tempo and feel of the music change way too abruptly.

As one song is playing, you can queue up the other track. This is what you will do to prep the next song so that it comes in as the previous one is ending.

The app is pretty cool for messing around. I am still not interested in DJing, but it’s cool to know that I have pretty much what I need, and all I have to do is add the proper songs to my iPad. In fact, I am DJing in my room right now as I work on this review. Well, sort of. Actually, I’m just testing out the app. Still, it’s fun for a freebie. Grab it now while you can because Traktor DJ is normally $20!