Millions of people worldwide are cutting their cable bills and switching over to Internet streaming media. Join us for a quick look at some of the best streaming devices currently available for TV’s everywhere.

If hooking your computer up to the TV via HDMI isn’t an option, or something you’re not interested in, then your most viable choice is to get a Media Streaming Device. Here we’ll take a look at some of the current top devices that connect to the back of your TV and deliver your favorite shows and music sans the traditional cable connection. Millions have already cut the cord on their traditional cable TV connection, have you?

An obvious contender. Apple TV is Apple’s stake in the TV streaming market. Apple TV allows you to stream from iTunes, iCloud, and AirPlay; and that’s it. The new generation of Apple TV allows 1080p out, but it is limited on the amount of channels it can play. A jailbreak solution is circulating the internet that potentially allows the device to stream from your PC as well as play more channels. Aside from streaming from your iPhone and other iOS devices, out of the box the Apple TV plays Netflix, YouTube, Vimeo, and most major sports networks. Our own Brian Burgess and Steve Krause have used and written several tips regarding the Apple TV.

Boxee features thousands of channels as well as the ability to stream networked content at 1080p. It features a unique remote with a simplified interface on the front, and a full QWERTY keyboard tucked away on the back. Additionally the remote is RF and doesn’t require line of sight to control like others that use IR; unfortunately meaning it is not compatible with many devices as a universal remote. Boxee plays most file formats. It also sees regular updates and an increasing number of content providers.

The Roku 2 has come a long way since it’s 720p predecessor.. Roku 2 offers Hulu Plus, Amazon Video, Crackle, HBO-GO, and hundreds of other webapps and channels; all capable of streaming in 1080p (if the channel supports it). In the XS version the remote comes with a motion sensor that can be used to play games. Supports Wireless or Wired internet connects. Streaming from a PC isn’t supported out of the box, but it can be enabled with the use of channels. One of our own, Brian Burgess, has written several tutorials covering the Roku and Roku 2. 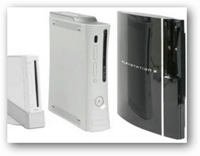 If you own a current generation game console then you can stream most internet and networked media directly to it. Both the Xbox 360 and PS3 support HD streaming from networked PC’s and online services such as Netflix or Hulu. The Nintendo Wii also streams Netflix, however it doesn’t offer full HD and requires a jailbreak to access content from a networked PC.

Western Digital doesn’t just do hard drives. The WD TV is designed primarily for tech enthusiasts that want to stream their own downloaded high quality format media to their televisions. Whether you are loading an MKV, VOB, or ISO file the WD TV can play it. Included is an internal 1 TB hard drive, and a host of apps to stream from Netflix, Hulu, YouTube, and other online channels. The WD TV can also act as a network server, or hook up to other network servers to stream media. Unfortunately it has no native Wi-Fi connectivity, but does support most third party USB wireless adapters.

The SMP-N200 is Sony’s 2nd generation response to the Apple TV. It features 1080p video quality and the ability to stream 3D HDTV. Built-in Wi-Fi, and iPhone or Android apps to allow remote control make it easily accessible. It supports DivX and other formats. It’s web streaming are reported to work better than their Sony PS3 counterparts. Although it is reported to not be as user friendly as some would like, its support of DLNA content essentially makes it a real contender. Check out our Review of the streaming device.

Samsung has lead the way in producing Smart TVs, but now other manufacturers have caught up as well. Most of these TV’s have their own built-in app platform and can stream online content directly. Some include Google TV but I’ve read those with it aren’t good for gaming or fast-paced HD scenes. This is probably the pricier option though, if you want a quality screen that is larger than a 32” be ready to fork out anywhere from $500 to $2000.

It’s 2012, and that means that most Blu-ray players have caught up technologically enough to run streaming apps on their own. In the $50 area there are multiple Blu-ray players available capable of running Netflix, Hulu, and other online channels. Just check each device to be sure it has the channels available that you are looking for.

There sure are plenty of media streaming boxes to choose from. Which media solution do you use?