There are quite a few online meeting/scheduling/web conferencing solutions on offer on the web, but TimeBridge recently distinguished itself by integrating with the Evernote API. The much-ballyhooed partnership announced earlier this year felt a bit more like a plug for TimeBridge than a genuine groundbreaking feature for Evernote users, but after giving it a whirl I can see the value in this marriage between web apps. TimeBridge does everything a web conferencing suite should—you can schedule meetings, add attendees, integrate audio and web conferencing (for a price), and punch in Agendas, Action Items, and Notes. Those last three items is where the Evernote interoperability comes into play. 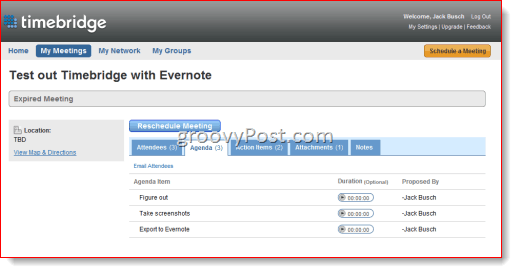 At the end of the meeting, an Export to Evernote button zaps all the meeting information over to your Evernote account. 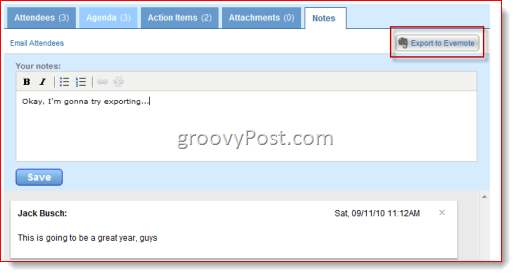 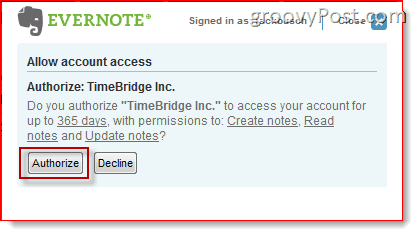 After you export, the Meeting Brief will appear in your Evernote notebook after the next sync. The Meeting Agenda will be included in a bulleted list, followed by the Action Items, Notes, and Meeting Information (i.e., time, date, location, organizer, and attendees). Plus, you’ll have the usual Evernote time and date stamp to help your orient the item temporally. Honestly, it felt a lot like Outlook and Onenote integration. 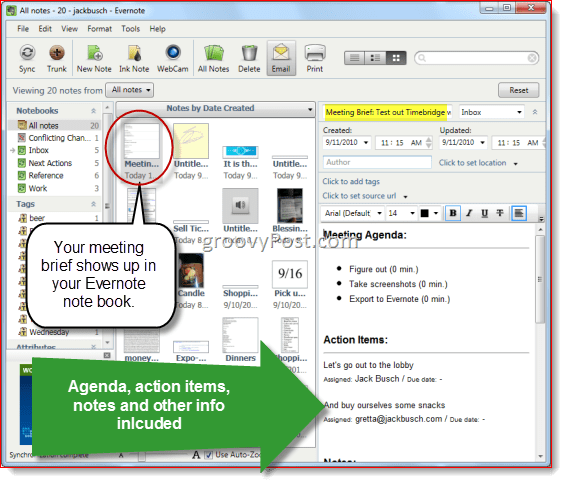 Overall, it’s quite handy—all the pertinent information gets neatly filed into your Evernote system so that six months down the road, you can quickly reference who was at the meeting, what you talked about and which action items were assigned. It’s probably a great way to finger the blame if someone drops the ball (i.e., accountability). Unfortunately, Attachments that were uploaded during the meeting won’t make it into the Evernote meeting brief. I think that might be a big weak point if critical documents, slideshows, or PDFs were uploaded during the meeting. But then again, I guess if it was that super-duper important, you’d have kept it in a safe place already.

Similar to Evernote, Timebridge includes both the free version to get ya hooked as well as more premium / business plans once you’ve been trained on their service and want to make a commitment of integrating it into your real business. That being said, everything I’ve shown you today is included in the FREE version but if you want the Txt Message Reminders on meetings, Phone Conferencing and Web Conferencing you will want to signup for one of the business plans shown below. 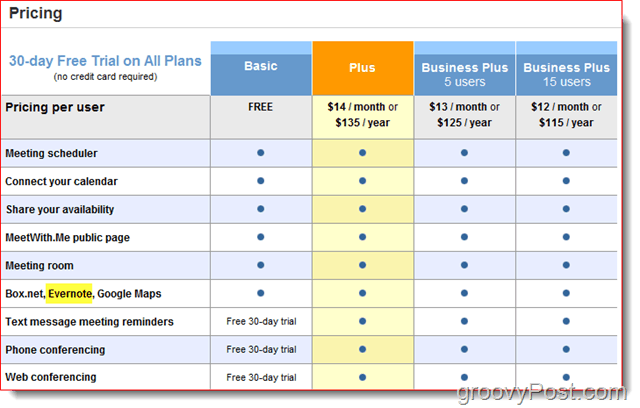 The Evernote-TimeBridge combo will be the handiest if all of your business associates use both. The premium version of Evernote allows Shared Notebooks, making a logical platform for team members to follow up on action items and meeting notes directly from Evernote. I can see this boosting the productivity in an organization that typically uses meetings as forums for bringing up issues and then never doing anything about them. With Evernote and TimeBridge, you can have your meeting, export the notes to the Evernote, and then have the assignees toil away at their given tasks for a few weeks before shooting it back to all the meetings attendees via Shared Notebooks. Of course, this all assumes that everyone in your team is equally as savvy and conscientious about using these apps—and as anyone who has ever tried collaborating with someone who’s not on the same technological wavelength knows, this isn’t always the case.

Personally, I don’t use meeting web apps all that often—but if I did, I’d certainly recommend giving the TimeBridge with Evernote export a shot.