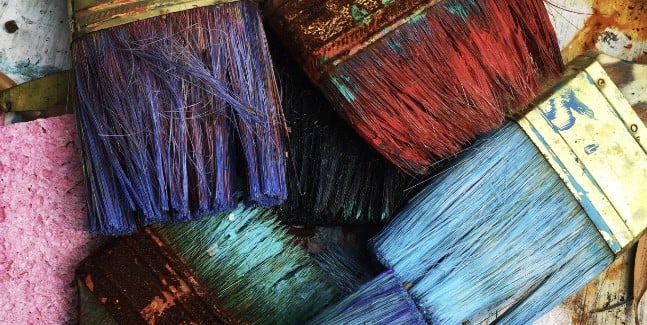 If you’ve tried Paint 3D and don’t like it, then Paint.NET may give you balance between intuitiveness and features that you actually need.

Microsoft is deprecating its classic Paint program in favor of Paint 3D, a modern app that focuses on the 3D design and social networking features. We previously showed you how you can get back the old Paint app using a registry hack. The problem is that this is a hack and we know that Microsoft likes to close loopholes, be it through a Windows Update or a future release of Windows 10. If and when they do, you might want to consider a third-party alternative that offers—and in some respects exceeds—Microsoft Paint in feature functionality, compatibility, and even extensibility. Paint.NET has been around quite a while now and is actually premised on the idea of a modern Paint app at a time when Microsoft seemed to have no interest at all in updating the app. In this article, we check out the latest version and find out what’s new and how it works on Windows 10.

Using Paint.NET – An Alternative to Microsoft Paint 3D on Windows 10

Paint.NET is a free download and it’s quite small too, coming in around 6 MB. As the name implies, it depends on Microsoft’s .NET Framework 4.6. The app is 64-bit compatible, which means you won’t have a problem working on large images, which is not uncommon these days. (The other day, I discovered Notepad is not able to handle certain large files, so you just never know.) Paint.NET is not limited to Windows 10, it works just as well on Windows 8 and Windows 7.

Installing Paint.NET is quick and easy: extract the zip file, launch the setup file then follow the on-screen instructions. 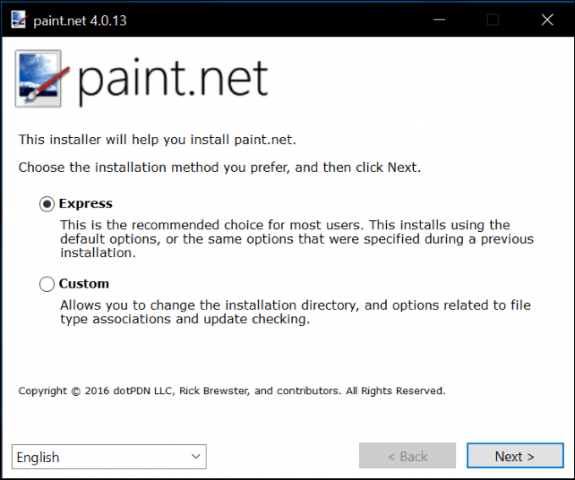 Unlike the built-in Paint app in Windows 10, Paint.NET features a wider collection of tools and options. In fact, the app could best be described as a jack of all trades, incorporating a mixture of vector and photo editing tools for most user needs. I personally use the classic Paint app in Windows 10 for resizing, cropping, and removing artifacts. The problem with Paint 3D in Windows 10 is that it’s too hard to grasp or just feels too limited for what I want to do. Tools and functionality are buried deep in parts of the interface or the focus on 3D takes too much precedence. 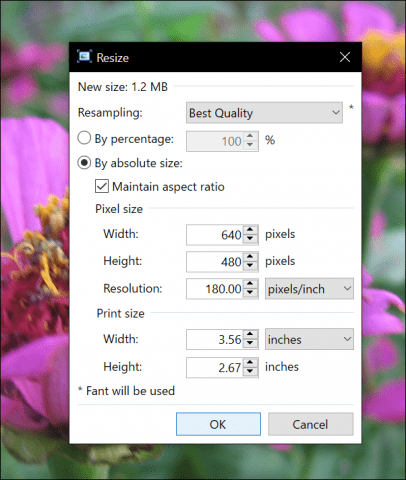 At first blush, using Paint.NET might feel a lot like the first time you used Photoshop. Familiar interface elements such as the floating toolbox and color palettes are reminiscent of the professional photo editor. That said, I felt quite at home in the app since this was my first time using it. Discovering some features and functionality took a little time, which isn’t unexpected. I also found some welcome surprises, like a thumbnail tab for all my active projects.

Even though some of these tools might look familiar to Photoshop users, they don’t behave the same way. For instance, the text tools proved difficult to use; I could edit, but not easily move the text to a desired area on the image. Also, the selection of objects (Control + T) is not available and the anchor seems sporadic at times. Apart from that, I like the power Paint.NET gives you, with the ability to easily create layers, move them around, edit their names, duplicate and even adjust effects like opacity. 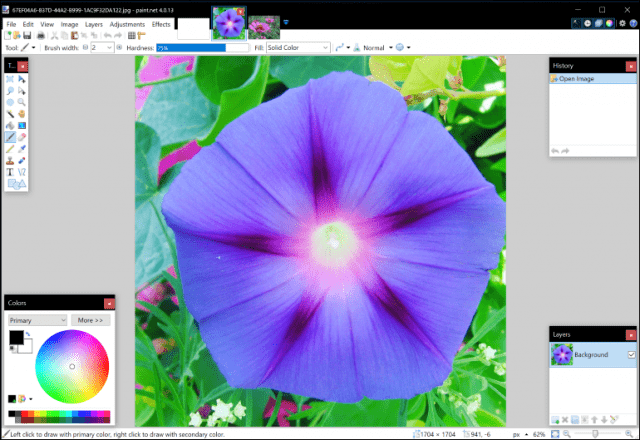 Paint.NET, just like any Windows-based app, supports inking out of the box. I was able to grab my Surface Pro 3’s pen and start using tools such as the brush and color pallet to draw on images or a blank canvas. I must admit, the interface is not particularly touch-friendly; it remains primarily centered around a mouse and keyboard paradigm. That doesn’t limit your interaction and you might actually get more mileage using it with a stylus than you would with your fingers. If that is a concern for you, then Microsoft has a customer in you with Paint 3D, which is much better for intimate interaction. 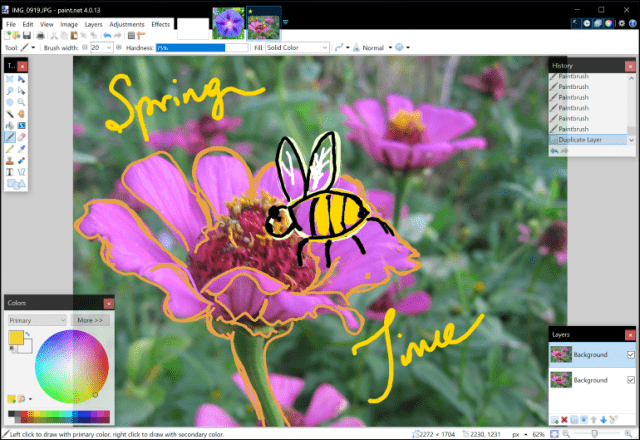 If you want a familiar, desktop experience, then Paint.NET delivers. Although it doesn’t deliver feature parity with Photoshop, there are some familiar ones even users of Adobe’s crown jewel will appreciate. You can create non-destructive layers, review a history of your edits, and use a collection of common effects such as Noise, Artistic, Distort, Gaussian blur, and more. I must admit, discovering some functionality such as defining the thickness of the brush proved tricky, but I think that’s more of a first-use niche issue. 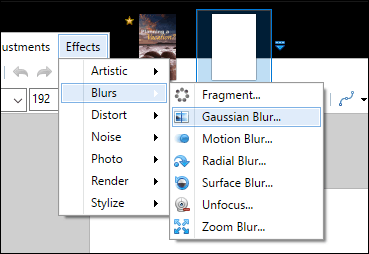 If you are jumping from an older release of Photoshop, such as C3 or earlier, you could likely be happy with some of what Paint.NET has to offer. Feature parity and output are just not the same, though. In fact, I tried out a Photoshop 7 tutorial in Paint.NET, since the same tools are available, but the results were different from a simple task such as defining image dimensions, choosing RGB color, dpi, and applying some of the common effects. Eventually, I gave up, because it was just too hard to find and apply the same effects I would if I was using Photoshop. If you have years of Photoshop muscle memory accumulated, don’t consider Paint.NET to be a drop-in replacement. 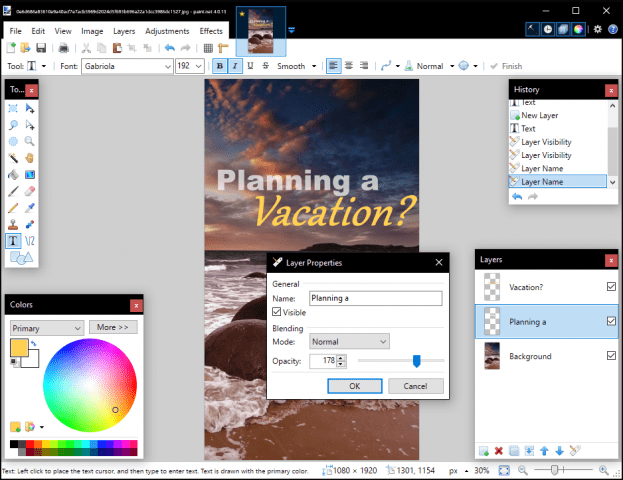 One of the key features of Photoshop is its extensibility through plugins; while not as robust, the option is there and for the freelancer, might just be about all you need. I checked out the forum where a list of all plugin downloads are hosted and I didn’t even know where to start. Unlike Paint.NET, some of these plugins might not be free, but with all the effort that goes into developing a program like this, being a cheapskate should be resisted. Every dollar helps to maintain the program and the ecosystem around it, so if you can chip in and purchase a few, it would go a long way.

Paint.NET supports popular image formats such as JPEG, BITMAP, PNG, and GIF. As for proprietary formats such as PSD, nope, those will need to be exported before you can open and view them in Paint.NET (unless you install a plugin). This should not deter you from trying Paint.NET anyway since it’s a much cheaper option than an Adobe subscription.

Paint.NET provides a great out of the box experience for new and experienced users; there is no need to worry about updating through the Store, plus there is a small learning curve and a productive interface: thumbnail preview, support for stylus/pen, layers, edit history and extensibility. What more could you ask for – yes – it’s free too! Check it out and tell us what you think in the comments.