In 2010 Novation released the UltraNova, a virtual analog synth based on the now classic SuperNova. Still, this little guy doesn’t have to ride on the coattails of its older brother to get our attention. It’s a nice synth with great sounds that’s easy to program. 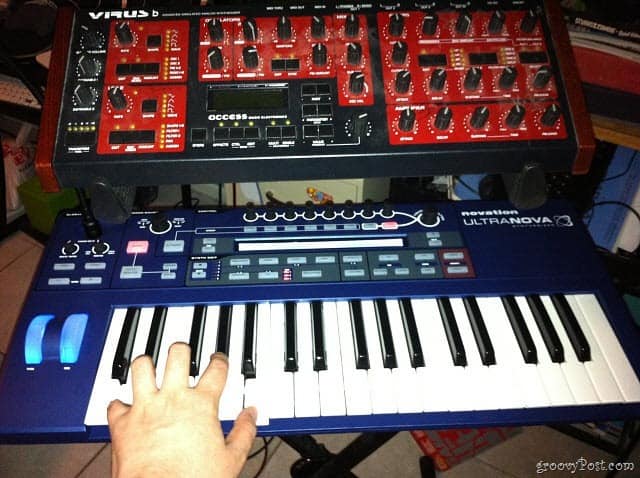 The Novation UltraNova has three oscillators, two ring modulators and a noise generator. The oscillators each have 14 analog waveforms, 20 digital waveforms and 36 wavetables with nine waveforms each.

Oscillators can quickly be fattened with the Density control. Density stacks multiple copies of the same oscillator without sacrificing polyphony. Those can be further detuned to add more thickness to the sound. This is ideal for creating the popular supersaw-type waveforms while only using a single oscillator.

The UltraNova has two filters with 14 filter types. You will find your usual array of lowpass, bandpass, highpass with varying slopes, but it doesn’t go beyond that. There are also routing options: bypass, single, series, parallel 1, parallel 2 and drum. I rarely use bypass, but even playing around with these routing options will change your sounds dramatically, so it’s worth playing with.

The effects include an EQ, 2 compressors, 2 distortions, 2 delays, 2 reverbs, 4 chorus effects and a gate called Gator. Surprisingly, they sound nice. I rarely use onboard effects when playing with hardware. I tend to prefer dedicated effect plugins for a number of reasons. However, the effects become particularly interesting when you start playing with modulation routing. You can set the effects as modulation destinations.

In live performance, this can be ideal for the keyboardist because they can play their part and say during the chorus part of the song, flip the mod wheel up to add a subtle distortion or delay effect for that little extra touch during those parts of the song. 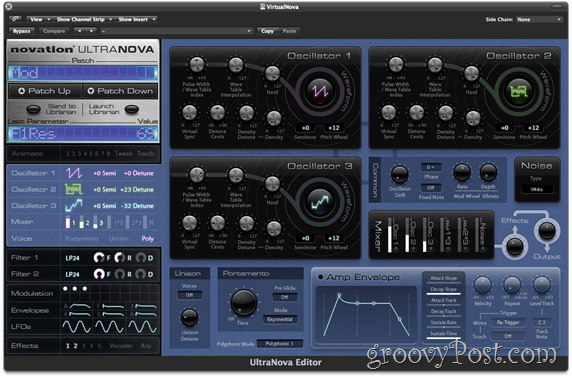 Some of these sections have multiple pages. You can use the Back and Next buttons to move back and forth through the pages. One example is the Effects section. Page one allows the you to assign effects, while page two lets you set the level of the effect and so on.

One of my favorite features of the UltraNova is the modulation routing. It gives users a range of options to play with. There are 20 modulation slots (in practical use, I’ve never had to use more than a few, so it’s plenty for anyone). There are 20 sources and 66 destinations. Those who have played with any decent virtual analog know that half the fun is in seeing what kind of results you can get by playing with modulation settings.

Much of this is made easier thanks to the editor Plug-in, which is available free at Novation’s website. The editor functions like a software instrument, and allows the user to control all parameters of the synth through a virtual interface. It makes for faster programming and will help ease software lovers into the hardware world as it lets them better visualize parameters and signal flow. Know, however, that it only serves as a control surface, so the UltraNova is still required to generate sound. In our experience, it gets along nicely with Logic 9. For Logic, you must add a software instrument and create an instance of the UltraNova Editor then create an audio track to handle the input. 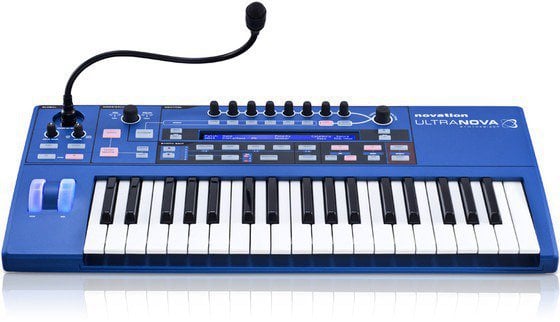 Also available is the patch librarian. This is simply a software package that allows users to save their created patches on their computer, quite useful for a quick backup or recall.

The UltraNova is lighter than it looks. Lifting it out of the box was a bit of a surprise as I expected it to be a little heavier. It’s sturdy enough to take on the road, but I’d recommend a good hard case if it’s going to be stuffed in a van with all your amps and instruments.

The mod and pitch wheel are also a welcome touch as I have never been a fan of the Pitch/Mod joystick found on synths like the Xio. I just feel like I have better control and wheels always seem a bit sturdier in my experience.

The knobs have two modes: Tweak and Touch. In tweak mode, you can turn knobs as you play and edit parameters in real time. This is often used for playing with LFOs and filters during a performance. The synth is also designed so that the last parameter you adjusted can be assigned to the larger knob to the larger knob on the fly. This is done with the Lock button. For instance, if I turn on Lock, then adjust the resonance, the larger knob will be assigned to the filter resonance. Very cool for live performance.

Also performance-oriented is the Touch feature. With the touch feature enabled, you can touch the any or all of the eight smaller knobs and they can activate a modulation source. So a user could assign an LFO to modulate the distortion amount, then assign a knob’s touch to activate the LFO. From there, they could simply touch the knob to add a weird on and off effect to the distortion. When they take their finger off the knob, the sound returns to normal.

If I have one complaint about this synth, it’s that the smaller knobs feel okay to the touch, but I’m not a fan of the “clicky” design. I’d rather them rotate smoothly (as the larger knob does).

If there is a modern virtual analog synth designed with the gigging musician in mind, it’s the UltraNova. Everything on the front panel is backlit. Buttons light up red when initiated, and it’s easy to reach the various parameters. The Tweak and Touch modes are performance-oriented.

The unit itself is compact, and the plastic body makes it easy to haul around. Add to that the fact that it’s USB-powered, and you have a great synth for live performance.

The UltraNova also works as an audio interface. This means that it can transfer audio directly to your computer via USB. Users can plug an instrument into the UltraNova and record direct into their DAW (Digital Audio Workstation) of choice. This isn’t a feature I ever had to use, but it’s something that a budget musician wanting to record their own material should consider.

There’s also the vocoder, which is average. It’s something you’ll use if you want to sound like a mid-70s – 80s pop band, or maybe for fun during live performance. Other than that, you may find yourself packing away the gooseneck mic and only using it for gigs. I will say the microphone is nice compared to some of the other pack-in microphones I’ve come across.

I won’t lie. It was a bit hard for me to say goodbye to this little blue guy when my demo period was up. I only used the vocoder to test it out, but the rest of my time was spent playing with initialized patches and seeing what I could come up with.

Some users may not like the fact that the synth is not multitimbral, so you cannot have it play your bass patch and a lead line or pad at the same time. This may not make much of a difference for project studios. The solution is just to record each part separately. If you’re a lazy bugger like myself, you record several parts as 8-16 bars “live” then just slice those into loops that you arrange into a song anyway. Saves me time.

Most worth noting, I think, is that this makes a nice beginner synth. It’s not intimidating and everything is clearly laid out. I must also say kudos to the folks who wrote the instruction manual. They included a nice little section on the basics of synthesis. I skimmed it, but it’s great reading for someone who is diving into their first virtual analog.

At $700, pound-for-pound, it’s ready to please any beginner or seasoned synth user.

To see it in action check out this demo from Novaton TV.