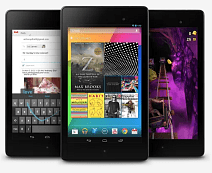 Thinking about buying the new 2013 Google Nexus 7? Here’s a spec comparison between the first gen model and the new one, and if an upgrade is necessary.

The new Nexus 7 went on sale in July, but if you have the first one, is the upgrade worth it? What does the new 2013 model of the Nexus 7 have that the first one doesn’t offer? Here’s a look at the specs between the two and whether an upgrade is a good idea. This is an aesthetics and subjective of all area, as beauty is always in the eye of the beholder. The new design looks more modern, with the Nexus logo on the back looking better in the new position. This makes it seem like it’s designed more for landscape view — which is the way a lot of people use it anyway. The original one provides a great experience already — especially since TRIM support was added in Android 4.3, and it uses a NVidia Tegra 3 chipset with a quad-core 1.2 GHz Cortex A9 CPU.

The new model, also made by Asus, uses the Qualcomm Snapdragon S4Pro chipset – we’re talking about a quad-core 1.5 GHz Krait. RAM is 2 GB – the old model had 1 GB.

Power under the hood makes the new Nexus 7 the winner, which means you should be able to run graphically intensive games on it more smoothly.

Throughout its life on the market, the first Nexus 7 was available with storage space of 8, 16 and 32 GB, with the 8 GB model retired along the way. The new model is available in 16 and 32 GB versions. I guess we have a tie here, but with everyone storing data in the cloud, I don’t think storage space as much of an issue today. It’s worth noting that neither version offers a micro SD card slot. The old Nexus 7 had, apart from the WiFi versions, the 32 GB model featured HSPA+ cellular connectivity, so you could use it on the go. The new Nexus 7 has a 4G LTE version, so data speeds are even better here.

The new Nexus 7 launches with Android 4.3 out of the box, but the old model has been upgraded to the latest version. A tie here.

Is the new Nexus 7 worth the upgrade? Most certainly if you want the latest and greatest with a rear camera. Or maybe you’re first tablet has been beat up and the touchscreen is no longer working for example. By the way, if that happens,  learn how to re-purpose it as an eBook Reader.

If you’re happy with your current first gen Nexus 7, there’s not much of a reason to upgrade now. However, if you want a crisper display, more processing power, and rear-facing camera, you’ll probably want to upgrade.

What’s your take? Are you on the fence about upgrading? Leave a comment below and tell us your thoughts!