If you own a Transformer Prime, you know how sweet the graphics are. A great way to take advantage of the graphics is using your tablet for gaming. Here are five awesome free console quality games from Nvidia Tegra Zone.

If you own a Transformer Prime, you know how sweet the graphics are. A great way to take advantage of the graphics is using your tablet for gaming. Here are five awesome free console-quality games from Nvidia Tegra Zone.

Picking up where I left off with what I do best, I’ll be focusing on those of you with Transformer Primes and other Tegra devices. I proudly present to you five groovy Nvidia Tegra Zone games you can play for free! Most of these games are quite large as they are console quality. This means they look awesome on the Prime, and even more so when used via HDMI to a big screen.

A couple of them are in open beta, so keep that in mind if you decide to check them out. Features and gameplay will change, and that’s usually a good thing. 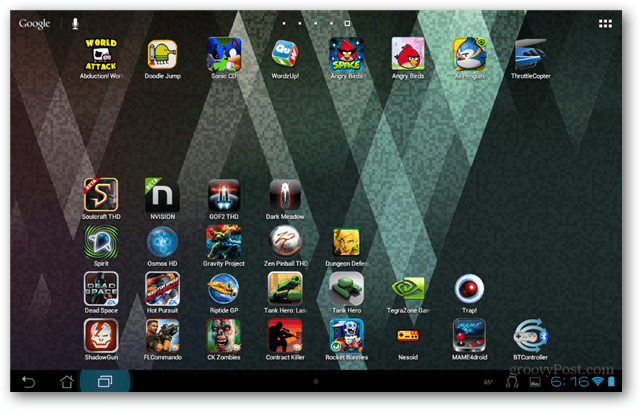 Ever since my Complete Android web browser review, I’ve been tirelessly playing games on my Transformer Prime to tell you what you should and shouldn’t waste your time on. Here are my top five free games hand-picked right out of the Nvidia Tegra Zone. Keep reading till the end for a special sixth pick. It’s not a game, but if you have a Tegra tablet, you will find it kind of interesting. 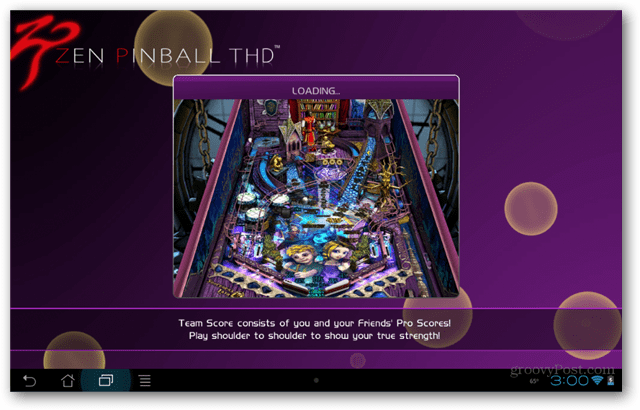 I’m a pinball freak! Not so much on game devices as I love the real thing, but I believe this might be the next best thing to Kirby’s Pinball Land on the old school Gameboy, and the Metroid Prime pinball game on the DS. Both of which I thoroughly enjoyed. Touted on the Play Store as the ultimate pinball experience on Tegra devices, and I would have to agree with them. It’s not like I played every single pinball game out there, but I’ve played enough to know this one is completely awesome. 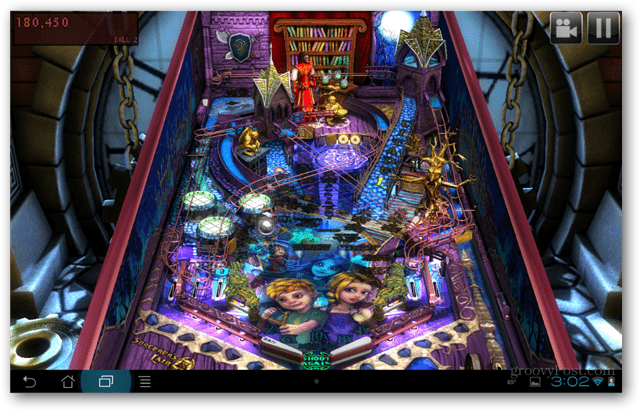 It’s free, but where they get you is the add-ons via in-app purchases. If you get bored of the table it comes with; you can buy more. There’s also a ton of sub-tables and games within the main table, once you get into it a little. I played for a couple of hours and didn’t get bored, and that was on the free table it comes with. I’ll be checking back and seeing what other tables the updates bring.

You can buy different game play versions, right from within the app. Some of the tables are only $.99, and the Marvel tables are $1.99. There is also an Epic Quest table you can buy for under a buck that, legend has it, is where RPG and Pinball meet. It doesn’t get much more exciting than that. The different tables look beautiful on the Prime, especially the Marvel tables. You can get the Fantastic Four, Thor, or a Wolverine table in trade for a couple of greenbacks via Google Play. 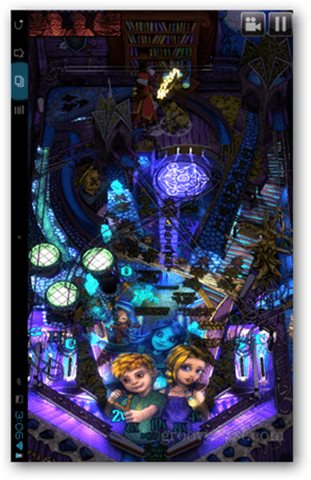 A cool way to support the developers, and much better than making you buy weapons to make it through levels like in some other games we’re fans of. Oh, and did I mention it’s OpenFeint enabled? If you like pinball even just a little bit, you will love Zen Pinball. It’s also available for the iPad, iPhone and iPod touch. 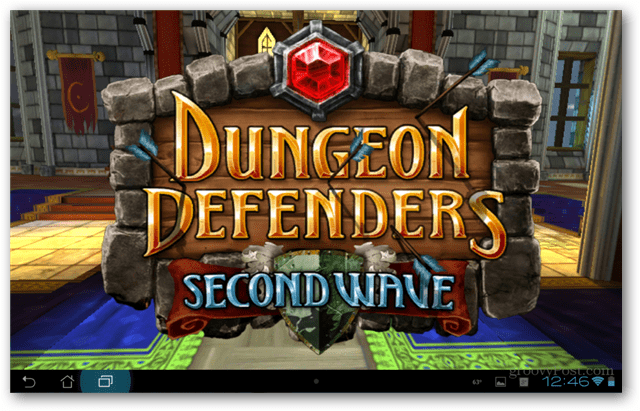 I’m usually not a fan of tower defense games, but then again, this isn’t your normal tower defense game. It’s tower defense with some action RPG mixed in to create an awesome and intuitive gameplay experience. There is a single player solo mode or a real-time cross-platform online multiplayer version. I’m a huge fan of games that allow you to play online with your friends regardless of whether or not you have the same operating system on your device as they do. 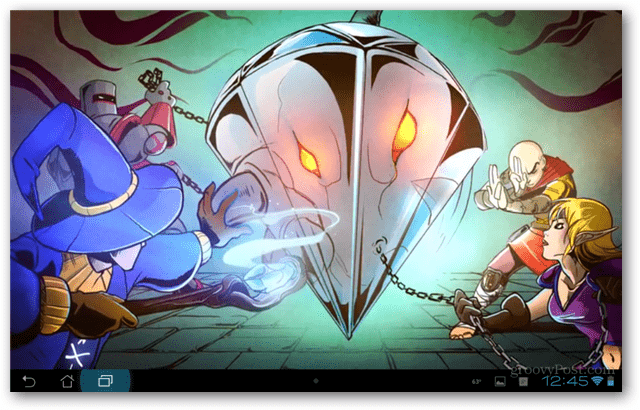 Keep in mind, this game is using a ton of processing power, not to mention network connectivity if you’re playing online, so it will drain your battery quite fast. Make sure you are playing while plugged in and it’s a nonissue. I took it the Prime down to almost nothing from a full charge in just under a couple of hours. It also took forever to download, and that’s on my 30 Mbit cable connection. Not sure if the server that was being slow, or the fact that once it finished, I had just under a gig less storage free. Either way, it was well worth the wait. 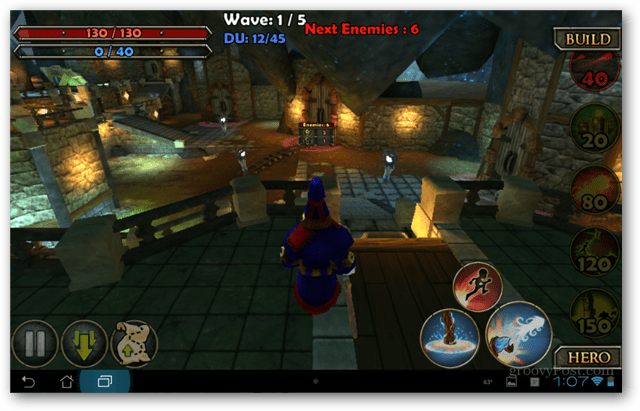 As all games do in the Tegra Zone, Dungeon Defenders: Second Wave takes full advantage of the Tegra 3 utilizing the Unreal Engine 3, and, according to the Tegra Zone description, is “the only mobile version that rivals the graphics quality of its PC and console counterparts.” 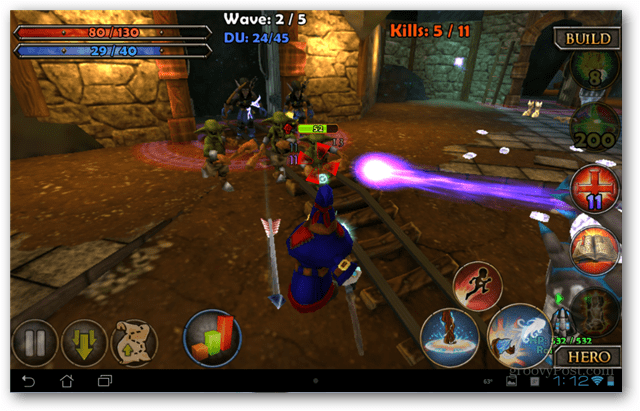 Playing without purchasing any in-game mana or animals or equipment, I still found it to be a super fun game that will kill many hours of your life. Dungeon Defenders: Second Wave also supports 3D on 3D displays with HDMI 1.4 support. You know, if you’re into that sort of thing.

Galaxy on Fire 2 by FISHLABS Entertainment 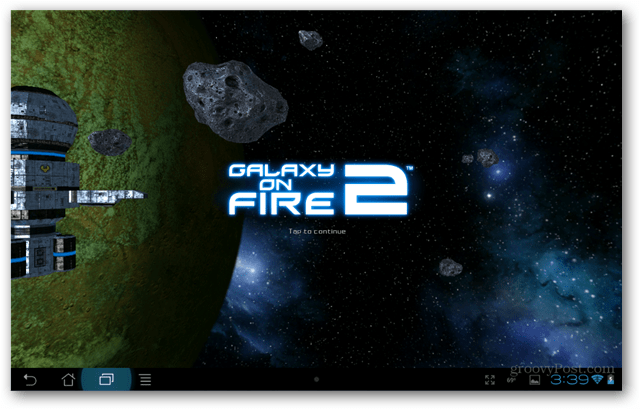 This is one of my favorite games I’ve reviewed so far, mainly because I’m a huge fan of flying canard’s and other small ultralights, as well as any flying game ever made. I love flying, and when I was younger, I took great pride at being a Top Gun ace in both dogfights and landing the jet at the end of missions. Those of you who played the original Top Gun can appreciate the skills. 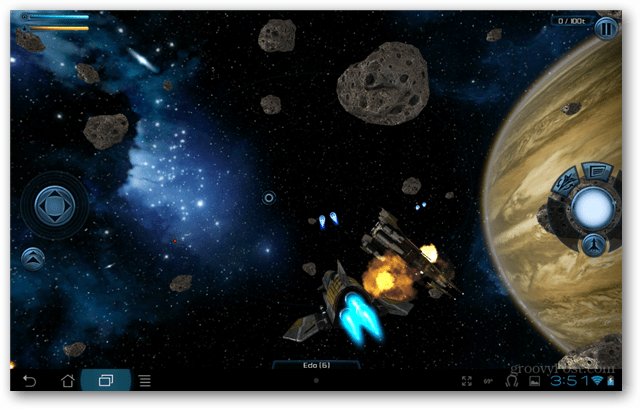 The dog fights in Galaxy on Fire 2 remind me of Starfox 64 or the 3D Galaga remake they made. Very smooth and easy to get used to, especially on a large screen. The ore mining is fun because you have to keep the drill centered in a puzzling sort of way, so that keeps your attention for a while. The missions are fun, and like all the games I’ve reviewed from the Nvidia Tegra Zone looks amazing on the Prime. The planet textures are simply beautiful. 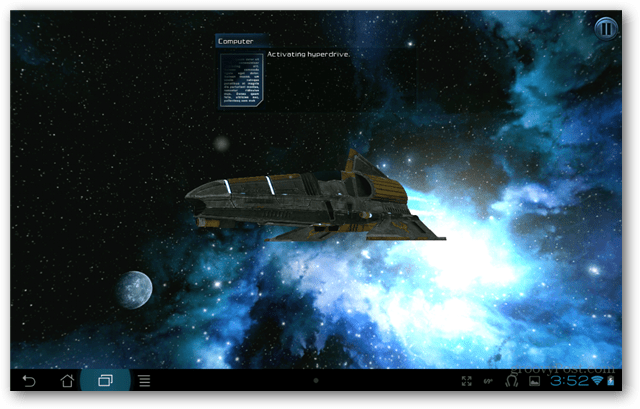 Fishlabs use their own in 3D render engine called ABYSS. You can play for free as much as you want unlimited in the first solar system, but if you want to access the whole galaxy, over 20 solar systems and to complete the full six to ten-hour storyline, you need to unlock the game via a $14.99 in-app purchase. I did notice some weird glitches on the Prime when the menu system would come up. It also glitched when I was trying to look through the options. Rebooting the Prime fixes the problem. 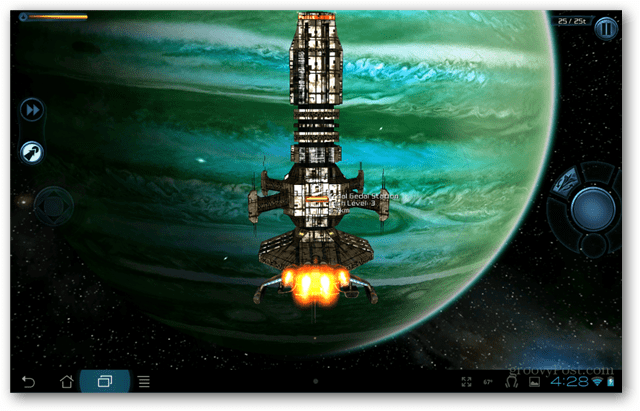 Overall a fun game if you want to do some quick spaceship dog fighting, ore mining, or mission accomplishing. Plus, if you have the cash to drop it is definitely worth the money to lose yourself in the storyline, although I managed to do that in the free version. Like their Google Play page says, it’s THE science fiction simulation with real console appeal. I like games that allow you to both plays here and there for ten minutes at a time casually, or delve into the storyline. I would have to agree, Galaxy on Fire 2 has it all. 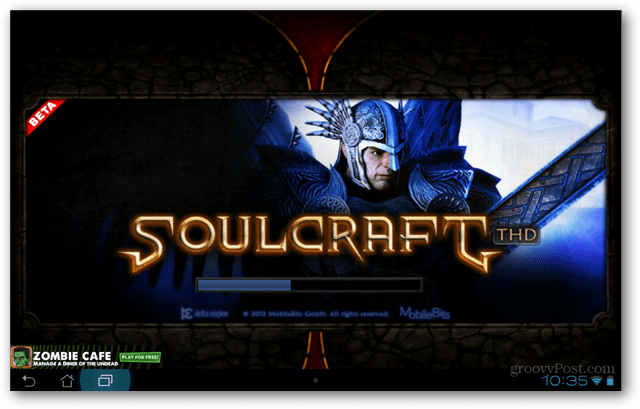 Most of these Tegra Zone games sound amazing with headphones on, and should always be played that way whenever possible. There’s something about the music soundtrack in Soulcraft Beta that is as epic as it is awesome. The attention to audio detail is fantastic, the gameplay is nice and smooth, and if I didn’t know any better, I’d say you wouldn’t know it was a beta just by the look and feel of the game. 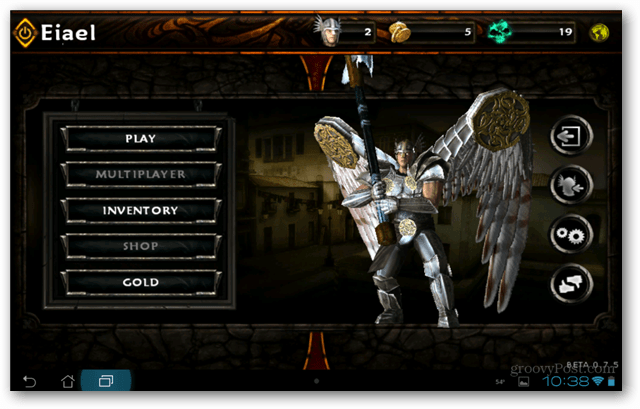 I like how you have different possibilities depending on how you choose to use your spells. You can also play Soulcraft with a controller. 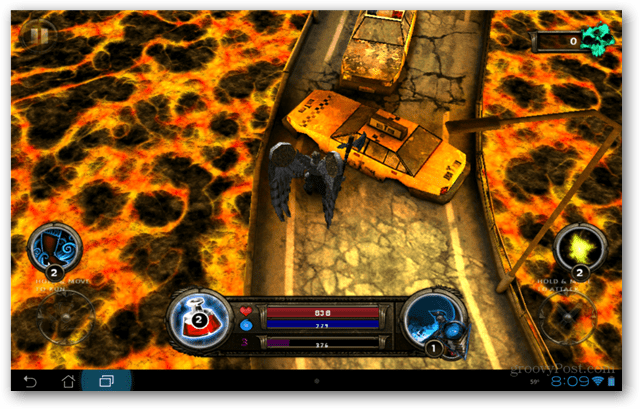 The storyline is interesting in this free2play action RPG. From the Google Play page, “With humans on the brink to discover the secret of eternal life, angels and demons make a pact to proclaim the apocalypse to be able to materialize into the real world, fight the humans and keep the circle of life intact. SoulCraft lets you play as an angel, demon or human – it is up to you who will win this fight.” I’m a sucker for games that involve keeping the circle of life intact. Black & White was one of my favorites. 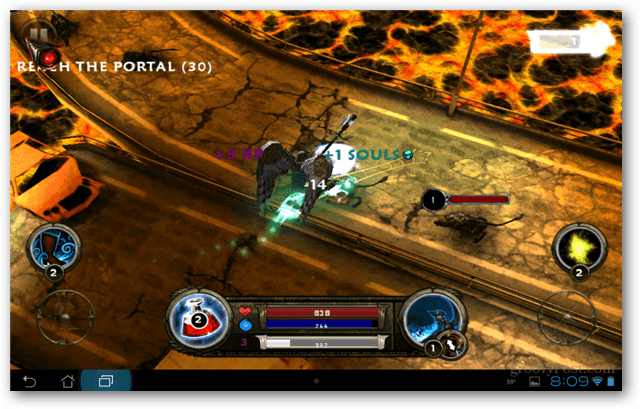 The game is developed by a small indie game studio, and they are taking suggestions for the game in their forums. If you want to help sculpt the 1.0 release of Soulcraft, get active. 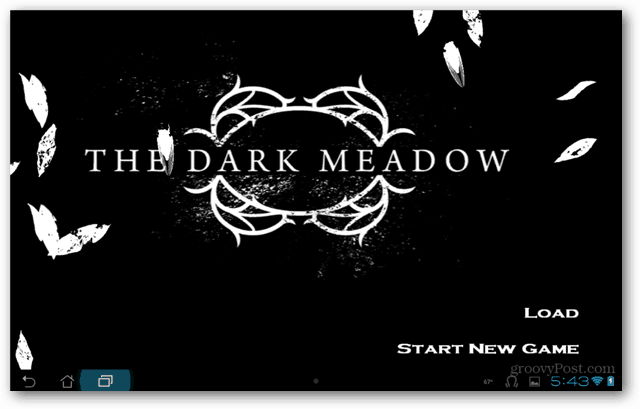 This is one of the more visually stunning games, especially if you like to get cozy with your Prime and turn the lights out, put some headphones on and get immersed in the graphics the Unreal Engine 3 delivers. It’s also good in the winter time, because of this game, much like all the Tegra Zone games, makes the Prime get nice and warm. 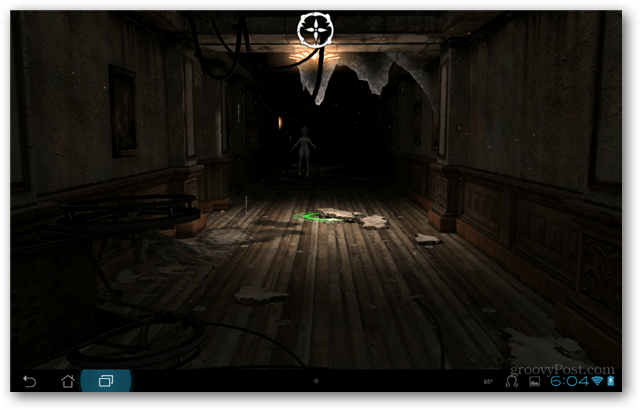 As of right now, Dark Meadow: The Pact is only available for Tegra 3 devices, but they say Tegra 2 support is coming soon. Dark Meadow is a beautiful first-person action adventure game with a very dark twist. This game reminds me of the dark Alice remake or something out of the original F.E.A.R. It’s the kind of game that makes you jump from the suspense. Yes, I am a man, and this game made me jump. I’m ok with that. 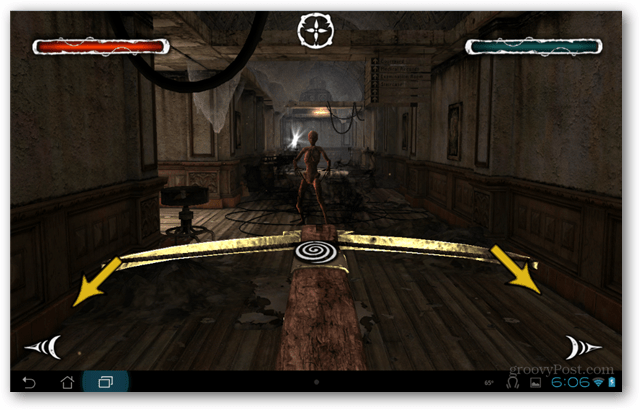 Like they say on the Tegra Zone page, Players fight to escape a dark fairytale world filled with fantastical creatures bent on destroying them. All in! I enjoy how the gameplay flows along with the story, as a lot of games tend to do these days, working in the game tutorial with the story. It’s always more fun that way. 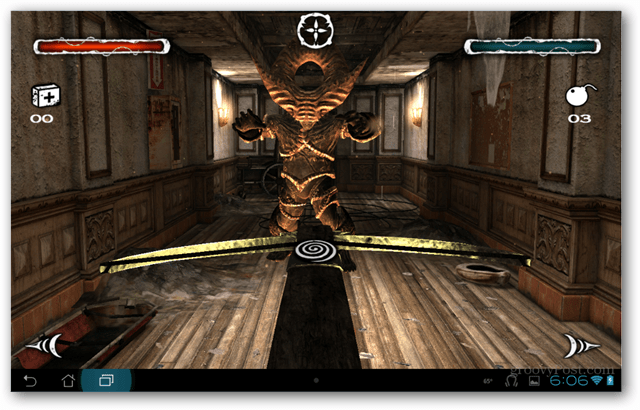 “Well, now there’s two of us, and maybe, if we help each other, we can get out of this place.” Yeah right, good luck with that. I’ve been playing for hours and still can’t get out of there.

The last thing I would like to recommend to you in close is the new Nvision app by Dialect. I was super impressed with all the cool information and articles, mostly well-written, focused on gaming, movies, gadgets, and technology in cutting-edge graphics. I wasn’t expecting much from this app but was happily surprised by how smooth it flowed when displaying the content. So if you have a Tegra-powered tablet, you should also check out the Nvision app. As I said, it’s currently in beta and can be found here.