In the market for a handheld, wireless keyboard? Check out the FAVI Mini Wireless Keyboard with Mouse Touchpad. For just under $30, this little keyboard makes a great remote control for a multimedia PC, Raspberry Pi, or gaming console. With a rechargeable battery, LED backlit keyboard, built-in touchpad and built-in laser pointer (?), this little multimedia keyboard does the trick for a decent price.

For a few months now, I’ve been eyeing up this $28 Wireless multimedia keyboard on Amazon from FAVI Entertainment. My new laptop has an HDMI output, which makes it great as a multimedia PC, provided you aren’t too lazy to get off the couch to punch a button or two now and then. It turns out, however, that I am too lazy for that. For awhile, I was getting by with TightVNC via my iPhone. But upon arrival of my tiny Raspberry Pi, I decided it was time to go legit with a real keyboard. So, I pulled the trigger and bought the FAVI wireless keyboard, having read nothing but a handful of Amazon reviews. 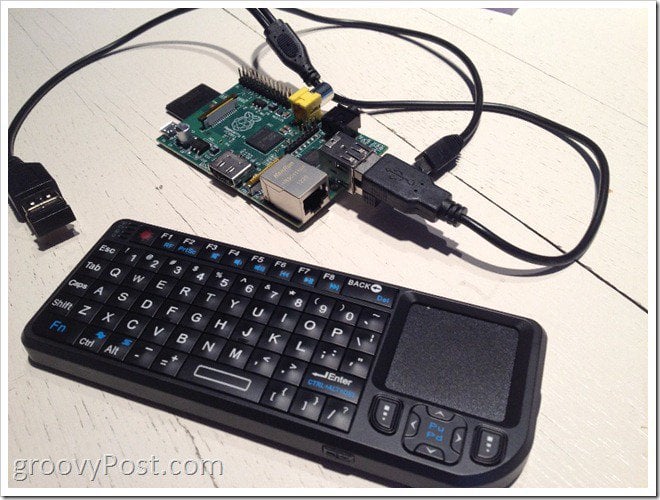 Quick verdict: It works. For both my Linux and Windows 7 computers, the FAVI FE01-BL keyboard worked right out-of-the-box as soon as I plugged it in. It does have a few quirks, though, one of which is notable. But there’s nothing that can’t be worked around. Read on if you care to learn more.

I’ll be honest—the main reason I chose this particular keyboard was the price. I checked out the Lenovo Multimedia Keyboard, which is sometimes sold for the same price but I chose to go with the FAVI keyboard because it had a few more stars on Amazon. The built-in touchpad is a nice feature, since it means I don’t have to get a mouse (which would take up another USB port and $10 more dollars). The built-in laser pointer I could take or leave—though I’m sure my cat will appreciate it. The button to activate the laser pointer is on the bottom. 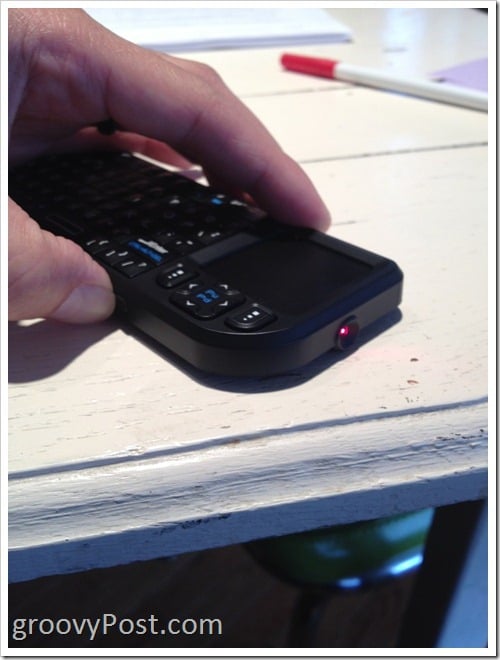 The FAVI wireless keyboard also comes with a built-in lithium ion battery. It charges in about four hours via a mini-USB connection. The included cable is actually a splitter that lets you plug in the dongle and the keyboard at the same time while using only one USB port on your computer. It’s quite handy. 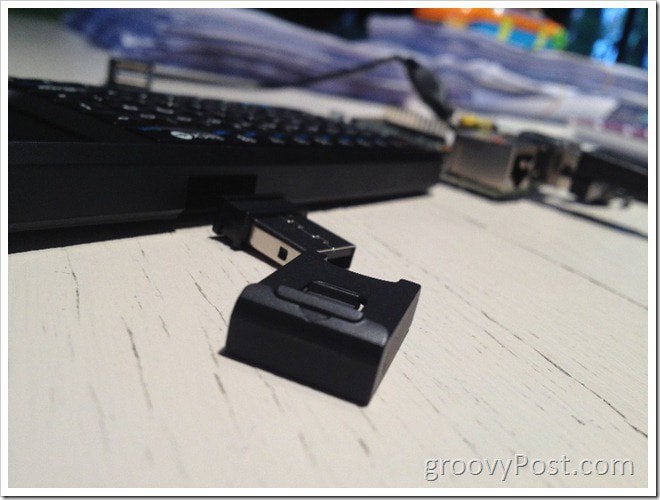 Also, I prefer using the included cable/splitter because the dongle doesn’t exactly fit smoothly into a normal USB port. I had to put an alarming amount of force on it to get it to plug directly into my computer, and I was kind of worried that I was breaking something. I didn’t, but it feels safer to plug it into the included cable going forward. When you’re not using the dongle, it stows away in a little holder in the top of the keyboard, which you slide out with your thumb.

As I mentioned above, the best thing about the FAVI Mini Wireless Keyboard is that it works. With Windows, it’s truly plug and play—as soon as I plugged in the dongle, I was in business. With my Raspberry Pi, which is a Linux machine, I was expecting to have to spend a little time in the Terminal window to get things working. But to my pleasant surprise, it worked equally as well as with my Windows laptop. Plugged her in, and I was typing in seconds—no configuration or driver installation required. On my wife’s Macbook running OS X Mountain Lion, the usual “identify this keyboard” dialog popped up. Because there was no right shift key, the automatic detection failed. But it’s no problem to manually identify the keyboard. Once that’s done, it works well in Mac OS X as well.

My experience actually using the keyboard was fine enough. The design is simple and mostly intuitive. You can click by tapping the touchpad or by clicking the left/right mouse buttons below it. The size of the keyboard is just right. It fits in my hands like an old school NES controller. The keys are configured in a QWERTY layout, with the enter key where the right shift would normally be and the spacebar shrunk down a bit and squeezed in at the bottom. Typing on the FAVI keyboard feels like typing on a good physical smartphone keyboard. I don’t foresee anyone writing a novel or coding on this thing, but I had almost no problems with “fat fingering” or feeling as if my thumbs weren’t where I expected them to be. 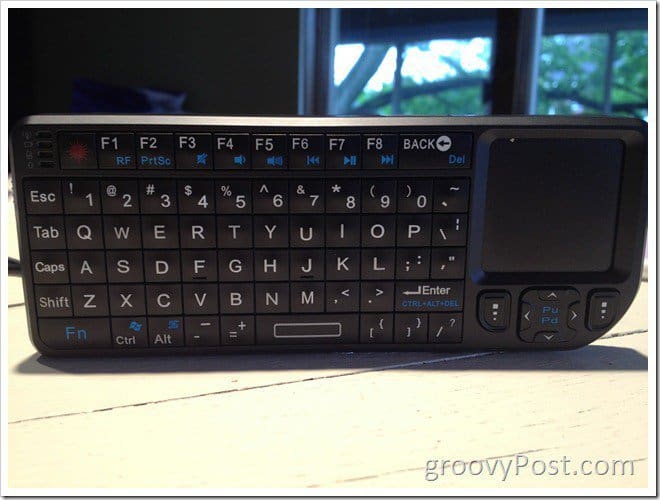 Similar to many laptop keyboards, there are function keys that can be activated by pressing the Fn key in the bottom-left. Handiest among these are the volume keys and the pause/play button. There’s also a CTRL+ALT+DEL function key, since the actual delete key is a function key itself.

The Not So Good: Glitchy Performance After Wake, Battery Life Concerns

Just one day after my initial positive experiences, I found myself packing this thing up to return it. The reason: I thought it was busted. While it worked great out of the box, the next time I picked it up, it was being extremely sluggish. The mouse moved at about 25% speed and my Raspberry Pi wasn’t registering 9 out of 10 button presses. I thought it was something amiss with my Raspberry Pi, so I tried it out on my Windows 7 laptop. Same result. I consulted the FAVI Mini Wireless Keyboard manual, which included a troubleshooting table, but I found no solution for my issue. There was an option to change the wireless channel (hold Fn + F1 for 10 seconds), but that did nothing to help.

Frustrated, I emailed FAVI tech support. About 2 days later, I got an email back asking for my Amazon invoice information. I sent them my order number, but they insisted that they needed me to forward the email I got from Amazon. We did this back and forth for about three emails and when I finally sent them what they asked for, I heard nothing back (to be fair, this was on a Friday—maybe I’ll hear from them on Monday). Regardless, they offered no immediate guidance for my issue. 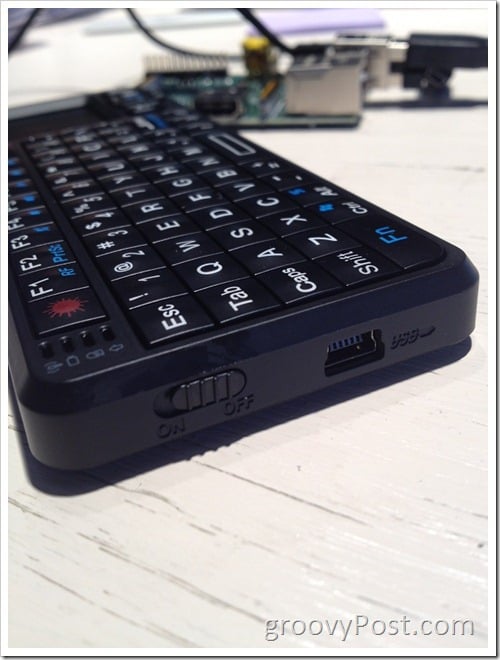 Just as I was packing it up to return to Amazon, I thought I’d try one more thing. The classic remedy: turn it off and turn it on again. This worked! Apparently, when the FAVI Mini Wireless Keyboard goes to sleep and then wakes up again, it stops working fully. Kind of a drag, but something I can live with.

Which brings me to another point…

The sleep/wake issue aside, it’s a good idea to turn off this thing when not in use anyway, since the battery life isn’t particularly impressive. I left it on overnight and the next day, it was giving me a low battery signal. I would think that in sleep mode, it wouldn’t consume that much battery, but it did. I guess that’s why they give you the handy charger splitter cable—so you can plug it in after every use. Again, not much of a hassle, especially considering the price. And I prefer that to having to keep buying AAA batteries, like I do for most of my other wireless devices.

But on the other hand…

I do wonder what I’ll do if/when the Li-ion battery goes kaput. Similar to an iPhone or iPod, there’s no way for the end user to replace the battery. So, when the battery dies, I guess the whole thing will be trash.

For now, though, I’m happy. I won’t be returning it.

Conclusion: Good for the Money, But Not Great

For $28, I’m satisfied. I have a feeling that I could’ve gotten a much better keyboard for twice as much. There are probably even better keyboards available for $5 or $10 more. But if you’re wondering if this keyboard is worth the money or not, I would say that it is. Just be aware of the sleep/wake problem that I experienced as well as the battery issue. Given that the battery will likely have a finite lifetime (I would guess 3 or 4 years, based on what you’ll get from an iPod battery), you might want to factor a replacement cost into your budget down the road.