Over 10 million people have already subscribed to Disney Plus, the long-awaited subscription video-on-demand streaming service that finally arrived in the U.S. after being tested in the Netherlands. After a few days of enjoying it, I have come to a not too surprising conclusion: Netflix and other services could soon find themselves with a significant rodent problem, although that hasn’t happened yet.

For decades we’ve heard how Disney likes to put content, especially its popular family films, into the so-called Disney vault. Disney Plus is that lockbox, which you can now open at any time on multiple devices.

If you have a household with young children, subscribing to Disney Plus is a no-brainer, because it’s all here. For an incredibly reasonable price of just $6.99 per month (or $12.99/mo which includes Hulu and ESPN+), content from Walt Disney Pictures, Walt Disney Animation Studios, and Pixar, is available to stream and download. For older kids and adults, there’s content from Lucasfilm and Marvel Studios, plus National Geographic. Again, from the Star Wars films to The Simpsons, and the MCU. It’s mostly all here, although some of the newer content is lacking at launch.

Except for the occasional new film to drop, the video content mentioned above will forever be static, however. It’s because of this that Disney Plus’ other content is what will determine just how popular the service becomes long-term. Beyond its core content, Disney Plus plans on making a splash with original scripted and unscripted content. Early on, this includes “The Mandalorian,” a pricey Star War-based series that’s already getting rave reviews, a The Lady and the Tramp live-action film, and “The Falcon and the Winter Soldier,” an upcoming Marvel Cinematic Universe series.

Disney Plus will also be the home to an increasing number of other Disney-owned family-oriented content, such as films from its recently acquired 20th Century Fox, Fox Searchlight Pictures, and also Hollywood Pictures and Touchstone Pictures. Non-Disney content is also coming to the service, such as CBS Television Studios’ “The Diary of a Female President.” It’s important to note that Disney’s Fox purchase means that 30 seasons of “The Simpsons” are available here too. Yes, Disney Plus isn’t just Dumbo and all those princesses.

Within the Disney Plus interface, content is relatively easy to find, although there’s room for improvement. The service organizes content by Disney, Pixar, Marvel, Star Wars, and National Geographic. There are also links to Originals and content “Recommended For You.” The last section changes based on your viewing habits. Among the other 21 sections at launch are Inspired by True Stories, Trending, Out of Vault, and more. Disney Plus also includes a search function that’s simple to use. You can also filter content by originals, movies, and television. The built-in Watch List lets you add titles for later viewing just by clicking on the “+” next to a title. 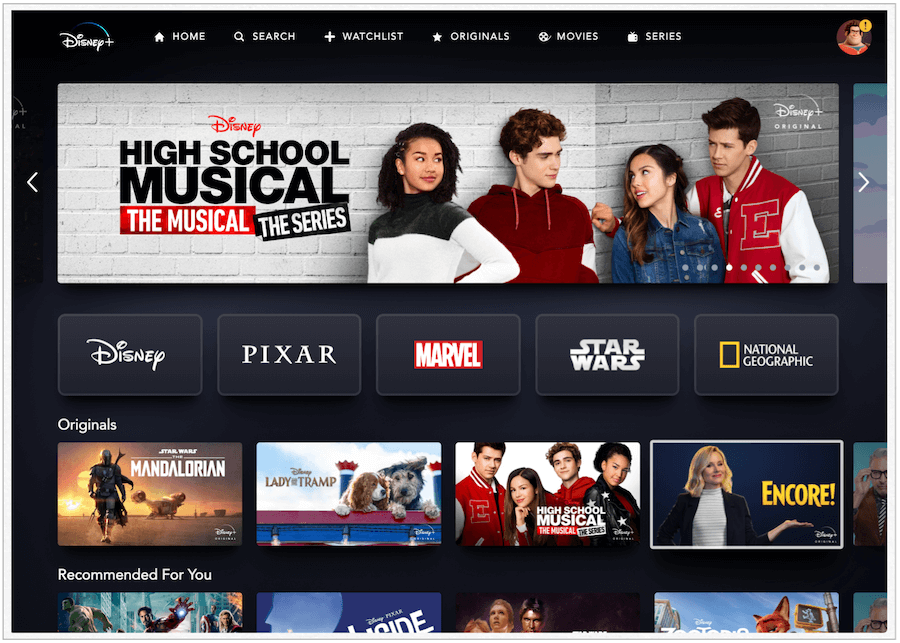 What’s lacking from the Disney Plus interface is primarily how currently viewed content is handled. If you start a film or television series, you’ll always be able to begin again where you left off. However, there’s no easy way to find previously viewed content or know where you are in your viewing without clicking on the play button. Hopefully, a “Continue Watching” section arrives in a future interface update.

The lack of security on accounts for kids is another beef I have with the Disney Plus interface. Right now, those with a Kids account can freely switch to a regular account thereby unlocking more mature (but still family-friendly) titles. Disney would be wise to add the ability to assign a password or other security to lock down the accounts. 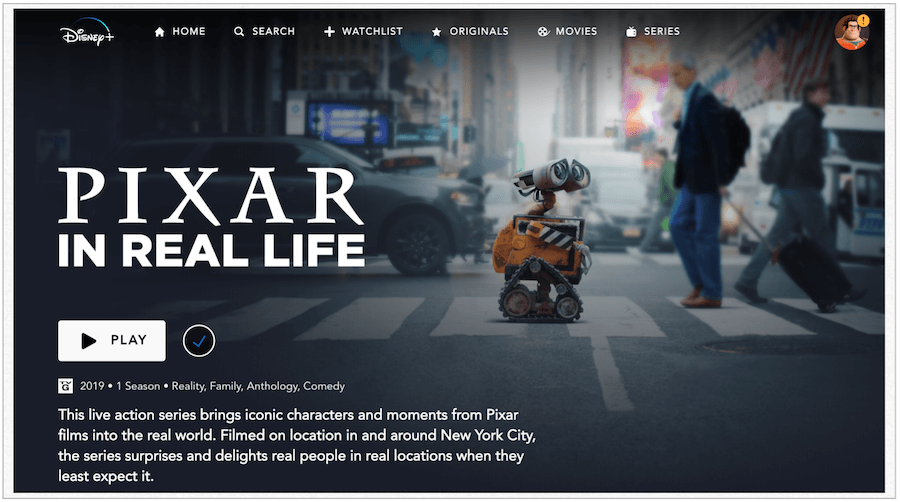 Despite these blemishes, Disney Plus has one of the easiest-to-use interfaces available. Netflix’s interface is haphazard, at best, while Hulu’s is confusing. Neither problems exist so far on Disney Plus, and hopefully, this will continue even as more content arrives.  It’s also important to note that Disney Plus is packed with accessibility features, including closed captioning, Descriptive Video Service (DVS), audio description, and audio navigation assistance.

Disney Plus is off to a great start. And I can’t wait to see what else develops on the service in the coming weeks and months. As I mentioned above, its long-term success isn’t going to be determined by its core content. Rather, how well it does with adding other content is what should keep executives at Netflix and other competitors up at night. If Disney can consistently bring new content to Disney Plus that becomes popular, the other services could really be in trouble on the family-friendly front. Given Disney’s deep pockets, I would expect nothing less.

As Disney Plus continues to evolve we’ll have a lot more coverage. We’ll let you know about changes, provide tips, tricks, and how-to articles.

It’s also worth noting that if you are already a Hulu (No Ads) and/or Hulu Live subscriber you can add the Disney+ bundle to your existing account.

You can watch Disney Plus content through streaming and downloading for offline use.