RunPee is a website that focuses on one thing: the best time for you to run to the bathroom while at the movie theater. If you want to know the best time during various movies, check out this site.

RunPee is a website that focuses on one thing: the best time for you to run to the bathroom while at the movie theater. If you’re one of the apparently few people that hasn’t seen Avengers yet, take a look if you’re one of those people who normally make a few bio breaks during a trip to the theater. 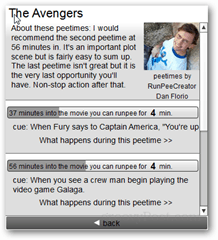 “I recommend the second peetime at 56 minutes in. It’s an important plot scene, but fairly easy to sum up. The last peetime isn’t great but it is the very last opportunity you’ll have. Non-stop action after that.”

The idea behind RunPee is that every movie out there has a few scenes that aren’t valuable enough to hold off a bathroom break. However if you’ve never seen the movie before, you’ll never know when these are coming up. So before before going to the movie, or during the movie on your smartphone (shame on you; you annoying screen-glower), just log in to RunPee to get the lowdown on the best time to Run for Pee!

RunPee functions as a website, but it also is available as mentioned on all of the more convenient mobile platforms as an app.