The Iconia Tab A500 is Acer’s first foray into a Honeycomb device. Sporting an official build of Android 3.1, this 10” tablet is claimed to be an excellent choice for any user, and it is certainly a capable device.

One of the first things I noticed as I used it was weight. Even though it weighs in at 1.69 pounds, it felt heavy, especially when using it in portrait mode. I’ve felt Apple’s iPad was also heavy, but I found myself placing the Acer down on a table or my lap when I needed to type. I didn’t find myself doing that with the iPad or my current favorite tablet – the  Nook Color. On the plus side, the 10” screen afforded such a large, virtual keyboard that I was able to touch type, which was a first for me.

Looking around the device, I noticed the brushed aluminum back. It’s very nice and seems like it would do a good job hiding scratches. The MicroSD card slot was my first major complaint –while the fingernail slot aids you in pulling the slot cover down, you actually need to pull the slot away from the tablet. It’s far from a major issue, and I could still get it open, but it did seem a bit careless on Acer’s part.
The MicroSD slot cover. Note the recess  for pulling the slot cover down.

Despite the foolish design of the slot cover, I was able to open it. 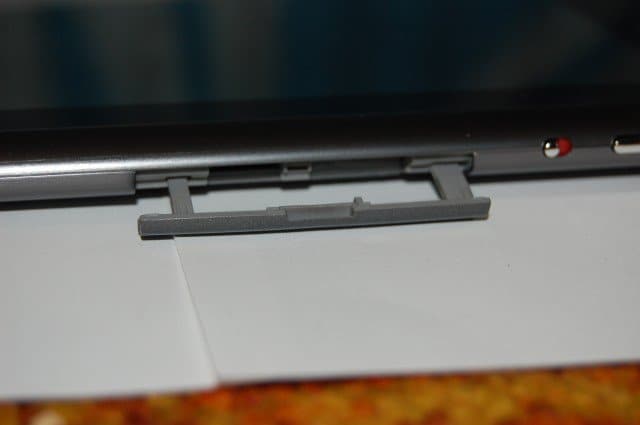 During the initial setup, the tablet found my wireless network very quickly. Once I connected, I started poking around some of my favorite webpages. The screen seemed a bit fuzzy, so I checked to make sure there wasn’t a protective film I’d forgotten to remove. There wasn’t; but I couldn’t shake the feeling like something was off with the screen. It didn’t look defective in any way, but even at the highest brightness setting it had a cloudy effect. I noticed this on still images as well as video the entire time I had it. Unfortunately, this was a big deal for me

The Iconia’s touchscreen was probably the most accurate I’ve ever used. I didn’t have to calibrate anything and it knew exactly where my finger aimed every time. I was pleasantly surprised by this as I usually take a while to get used to a new touch screen. This didn’t make up for the screen image quality, but it was a mark in the plus column. It certainly showed its share of fingerprints, but Acer was nice enough to include a cleaning cloth, which worked very well.

The device’s orientation lock switch worked as expected, not that I found a time when I wanted it. There are certainly cases for having it, so I was glad Acer included it. The other buttons work well, though I felt I had to hold the power button in excessively long to get it to turn on. After around 6 or 7 seconds, I’d get a tone that meant I could remove my finger. I tried pressing it quickly but it didn’t power on.

The cameras worked well for both photo and video. I was able to confirm the quality of the images with a quick upload to Google +. Considering the screen issue, the photo I took looked much better from another computer than it did from the tablet. I found both the front and rear facing cameras to be very responsive, though holding a 10” wide camera felt rather silly. The front facing camera is stuck near a corner which made taking self-portraits a little harder.  Even though the rear facing camera is 5MP and the front facing 2MP, I saw little difference in my test photos. I’d actually say that’s more of a testament to the 2MP than a failing of the 5MP, but I could be wrong.

The back has a nice brushed aluminum panel.

Acer Iconia A500 Back

Through repeated power cycles I found the shutdown time to be average amongst other Android devices, including both phones and tablets. Despite Google’s emphasis on speed in other areas, the boottime for Android doesn’t seem to be a priority. This should be a non-issue most of the time, as the device is pretty stable. I did have to restart once because it unexplainably lost its Wi-Fi connection. Other than that, it was perfectly stable.

The Acer Iconia Tab 500 has a dual core Tegra 2 at 1 GHz processor. It’s not the fastest available, but it’s definitely adequate; and I rarely found myself waiting for anything. The only exception to the device’s speed seemed to be during game play. It comes with three games of mention, though one of them isn’t full version.

Gameloft’s Hero of Sparta is a trial; and wasn’t the best thing I’ve ever played. It reminded me of the original Diablo, and seemed to take a long time to start or load new stages. Before I could even play, I had to download a 62MB update. This wasn’t a big deal, but I wasn’t sure why this would be the case as there’s over 12GB of storage on board.

The two full version games are Need for Speed Shift and Let’s Golf. Both retail for $4.99 each as of this writing. There were more updates to download for the golf game, which was the best visual experience during my time with the Iconia Tab A500. The graphics reminded me of something on the Nintendo Wii and they looked good. If I looked closely, I could see a smoky effect, but if I hadn’t noticed it elsewhere, I wouldn’t have seen it at all.

Need For Speed was actually a lot of fun, and for a strange reason – with this game you hold the tablet and turn it, as if turning a steering wheel. The heft of the tablet that I disliked before made the game pretty immersive, as if using a real steering wheel. The graphics on Need for Speed were pretty good, but not as vibrant as with golf.  Perhaps it’s unfair to blame the Hero of Sparta issues on Acer, as they didn’t make it, but they did choose to include it.

The right edge of the tablet houses the USB and power connections.

Acer Iconia A500 Right Side

Try as I might, the speaker’s volume wouldn’t get loud enough. I did everything I could, including messing with the device’s Dolby settings, but to no avail. I actually found I preferred Dolby to be turned off, which was easy enough. The headphone jack was placed right next to the power button, which was slightly inconvenient for turning the tab on after the screen timed out. Even through a pair of Ultimate Ears ear buds, which I find to have excellent fidelity, the Dolby setting made things sound hollow and muddy. Without it, audio quality didn’t blow me away but it was far better than the integrated speakers. The Iconia Tab 500 did have an intermittent issue with removing the headphones, as it didn’t always know I had done so. This is not an issue I’ve had with other Android units.
The left edge has the power button placed awkwardly close to the headphone jack.

Acer Iconia A500 Left Side

Acer says the Iconia Tab 500’s battery is rated for 8-10 hours and I’d agree. If I was as strict with running processes as I am with my phone, I suspect I could get 12 hours of general use.  I didn’t root it or install applications that need elevated permissions, but a small amount of research proved that this device is quite root-able. I didn’t find any indication that there was a CyanogenMod Rom available yet.

Digging around in the settings I found that the device was configured to automatically check for updates, but during my time with it, none were released. When I installed or updated an app from the Android Market, I found it to be very quick – much faster than my other Android devices.

While Acer says this tablet is perfect for everyone, I disagree. It’s a very capable all-around 10 inch tablet that could stand in place of a netbook or small laptop. It’s almost like the Swiss Army knife of gadgets in that it’s capable at many things but excellent at none. I wouldn’t want to carry this around to watch movies due to the screen quality issues. It’s probably not the best tablet for gaming, either, for the same reason. I did have an absolute blast using it with my desktop keyboard and mouse, a new capability with the Android 3.1 update. I could see how the stand plus a keyboard and mouse might serve as a capable computer for some people, something I’d never thought I’d say.

At an MSRP of $449 it’s not inexpensive; but there are some good features here, and if you can ignore the screen quality, which didn’t bother me outside of games, photos or video, it’s worth that price.

The bottom of the device has a dock connector.

When comparing it to an iPad, I found it a bit of an apples to oranges comparison (pun intended) but it’s still valid. The iPad feels big in my hands, as does the Acer, but the iPad 2 didn’t feel as heavy. The Iconia is 3/10 of a pound heavier than an iPad 2, but the difference feels a bit more significant. The iPad 2 certainly has a better screen, but responsiveness of application loading and operating feels about the same, maybe a slight edge to the iPad. If you’re in the market for a tablet and you aren’t already set into the Android camp, you’ll probably be happier spending $50 more for the 16GB iPad 2.

Support for MicroSD up to 32GB

In the end, I enjoyed my time with the Acer Iconia Tab 500; but I didn’t find myself reluctant to box it back up and return it. As much as I love gadgets I’ve always found that test to be my best. I’m not sure if a revised Iconia Tab is in the works, but if it is, a minimal amount of improvement could make this a very compelling tablet.