The windows 8 development team is pulling out all the stops for the next version of the operating system.  Version 8 brings many changes, and some of them even include reviving legacy features from earlier versions of windows.  Recommendations from users are not only being considered, but also included in the OS.  Listed below we have the highlights of what you can expect to see in Windows 8 explorer.

Hopefully by now you are accustomed to the infamous Microsoft Office ribbon, because it’s making the jump to a full-time position within Windows 8.  We’re also seeing the return of a beloved old friend: the UP button.

If you’d prefer to ditch the ribbon and gain precious vertical screen real-estate, then the minimized mode offers you emancipation.  This feature comes at the bequest of well, everyone…  According to market research from Microsoft, 83% of Windows 7 PC users are on a 1366 x 768 screen resolution, a popular laptop resolution.   And, while desktop users might be on a larger monitor, they are still in the widescreen 1.3 format.

Compare the difference.  What are some of the big changes you notice between Windows 7 and Windows 8?

As you can see in the screenshot below, Windows 8 Explorer doesn’t sacrifice any vertical space by introducing a full-blown ribbon.  In fact, Windows 8 has even more space than Windows 7 did; it can fit 2 more files within the exact same resolution as Windows 7. 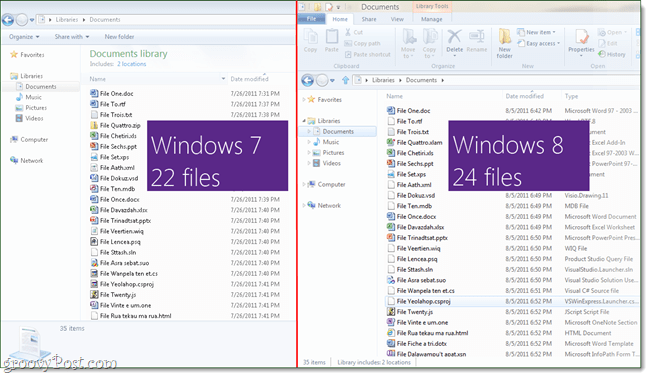 Overall the changes to explorer are looking pretty good, and it is mostly finished.  There are still a few tweaks left to do, but Microsoft is sticking to it’s guns and this round it is looking to make the latest version of Explorer all about the experience for regular AND power users –even if that means admitting they were wrong to remove old features like the UP button.

Goals of the new Windows Explorer We set out to accomplish three main goals with this new version of Explorer.

2 – Create a streamlined command experience. Put the most used commands in the most prominent parts of the UI so they are easy to find, in places that make sense and are reliable. Organize the commands in predictable places and logical groupings according to context, and present relevant information right where you need it.

3 – Respect Explorer’s heritage. Maintain the power and richness of Explorer and bring back the most relevant and requested features from the Windows XP era when the current architecture and security model of Windows permits.