Last year, the Super Bowl ignited a flurry of social  media activity surrounding the event, and this year should be no exception. For the first time ever, the big game will be streamed online both on the NFL and NBC website. In addition to that, there are apps available to make the game a more interactive experience.

First is the XLVI Official NFL Game Program app. The NFL touts it as more of a souvenir app, but it has loads of content — over 400MB worth of video and multimedia. 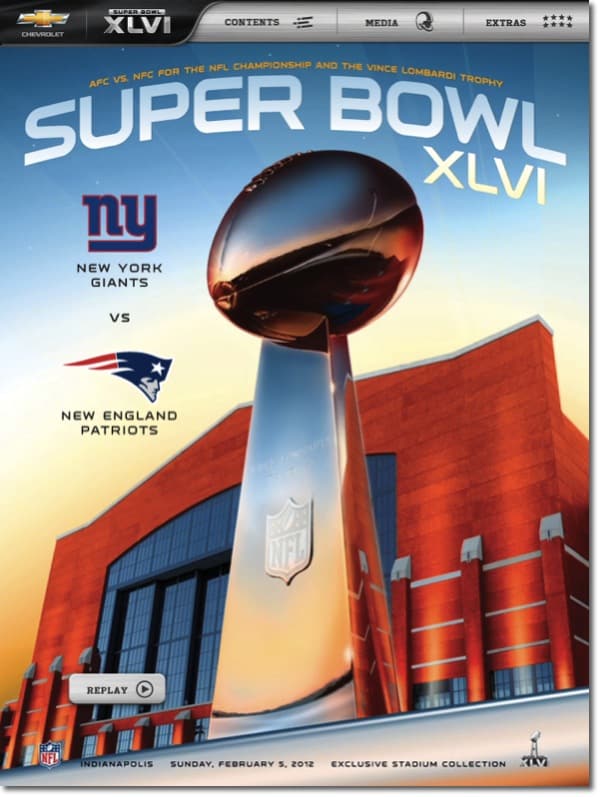 This app reminds me of a digital reference book for facts and anecdotes about each team’s path to the championship. It features key plays and moments from the 2011 season, and even lets you slow down the highlights to see it in more detail. 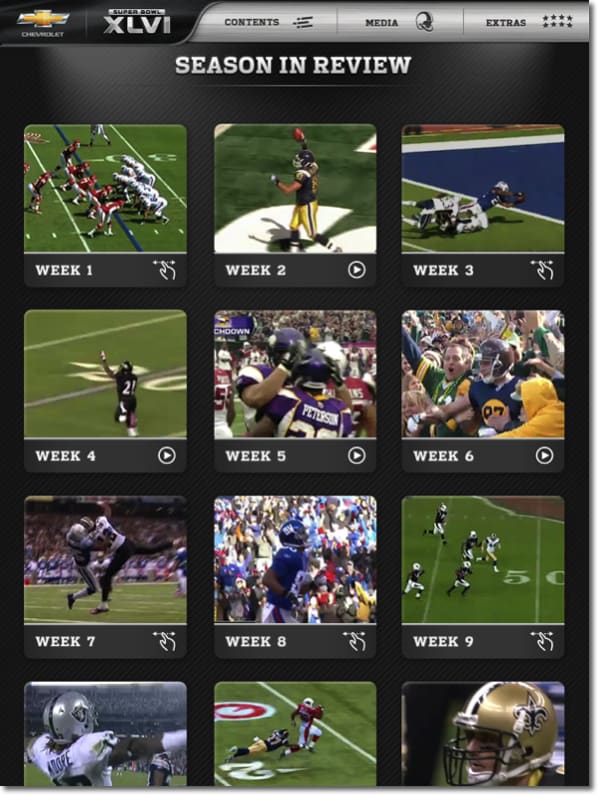 It even has extras with links to download other Super Bowl related apps. The XLVI Official NFL Program App is free for iPad. 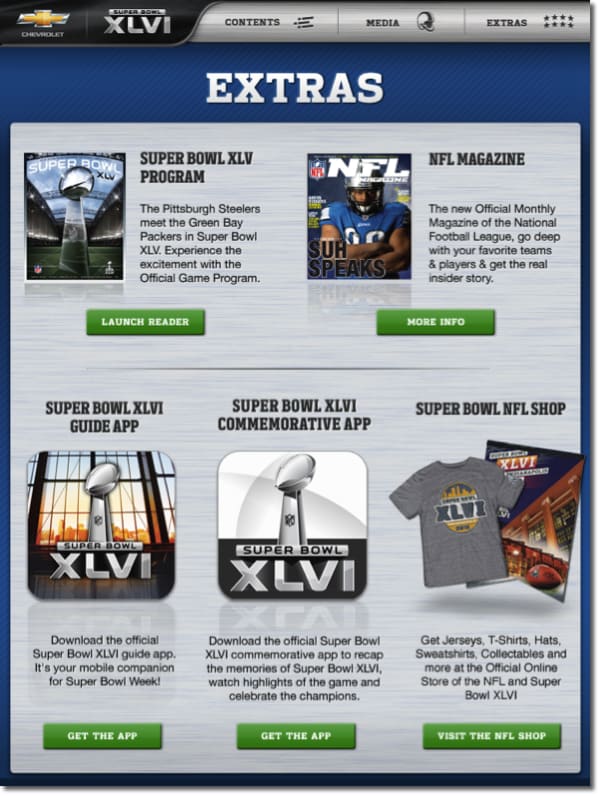 Detroit Lab’s Chevy Game Time is free for both iPad and iPhone and offers game trivia, conversation from Facebook and Twitter, and chances to win prizes. Twenty of those prizes are brand new Chevy vehicles. You can also watch Chevy’s Super Bowl commercials from the app, which is another way to win a Chevy. 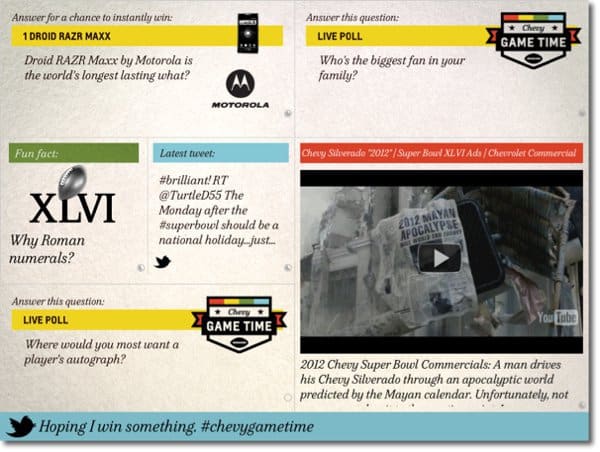 Once you get the app, you sign up through Facebook or Twitter (or create an account manually). The app will give you a license plate that has a unique ID that you’ll watch for during the Super Bowl and on the app. If the code that shows on-screen is yours, you win a Chevy. While the promotion of the app is very Chevy-centric, it also claims to have the chance to win “thousands of other prizes from our partners.” 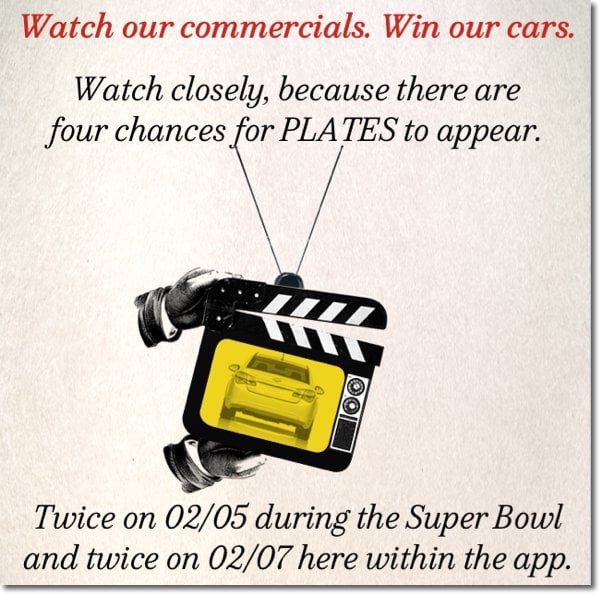 Yahoo’s IntoNow app works for any television show or event, but will especially shine during the Super Bowl. It automatically will identify what you’re watching, and then find out which friends of yours are also tuned in. 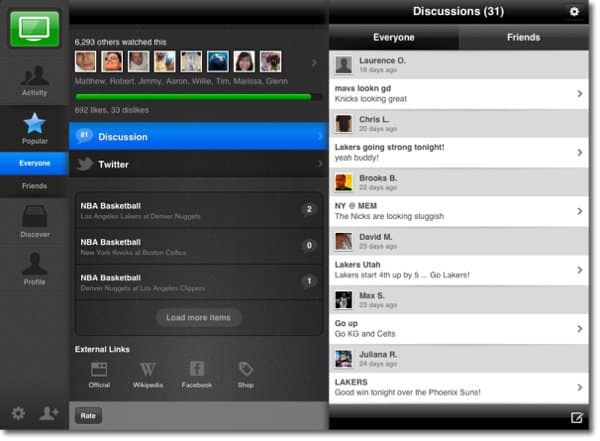 Then you can discuss all the big plays, commercials, and whether or not the  singer screws up the national anthem again. It also will show you live stats and other related information about the game. IntoNow is free for iPhone, iPad and Android.

GetGlue for iPad or the iPhone is another popular app for watching TV, and another way to interact with others about Super Bowl XLVI. Basically it’s like Foursquare for TV, movies, music, books, and more — You check-in to various forms of media. 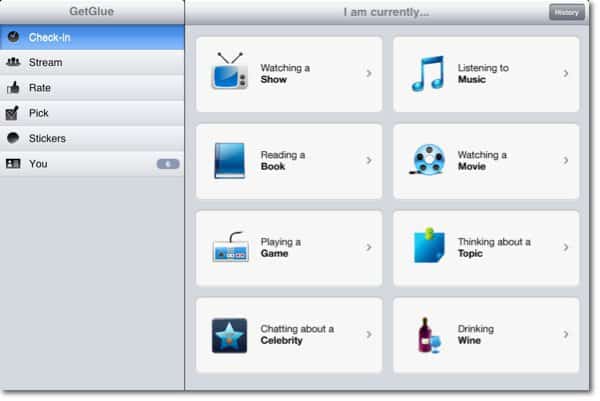 Then you can see the stream of comments from users also watching that program, which will be great for Sunday’s big television event. GetGlue is free on iPad and iPhone. 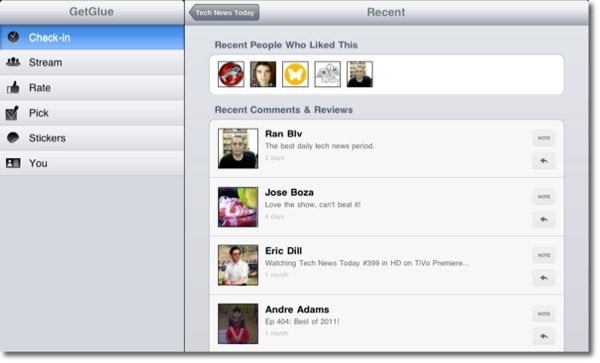 PlayUp is an app specifically designed for experiencing live sports. It provides live scores, and lets you chat in real time with friends and other viewers. 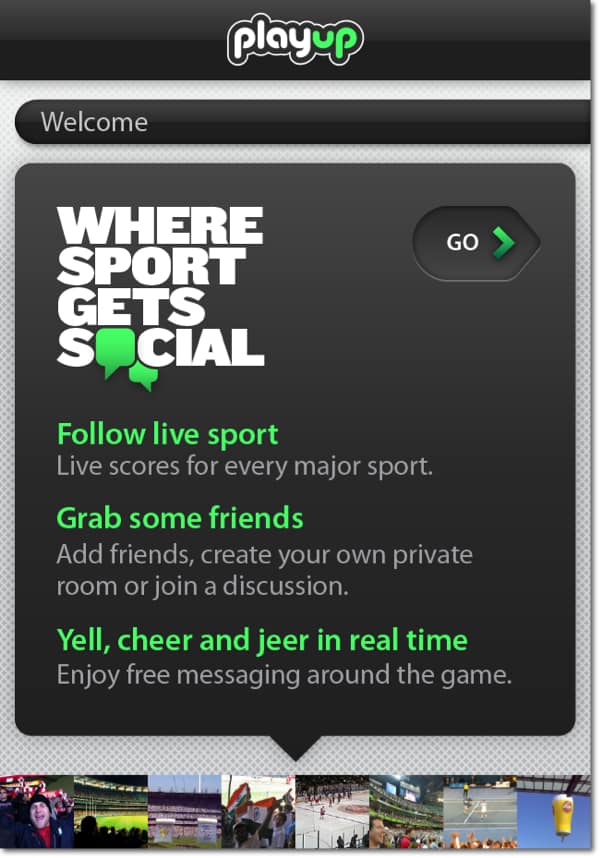 PlayUp shows all of the games happening live and ones that are upcoming. 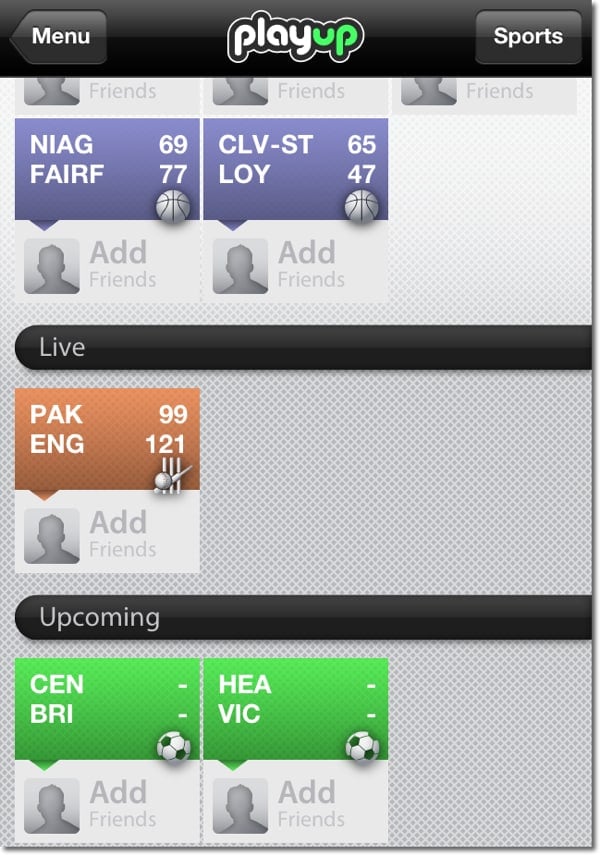 Once you choose the game you’re interested in (which will probably be the Super Bowl on Sunday), you’ll see the stats and conversation. You’ll be able to create private rooms for just some close friends, or public rooms that anyone watching the game can join. PlayUp is free for iPhone. 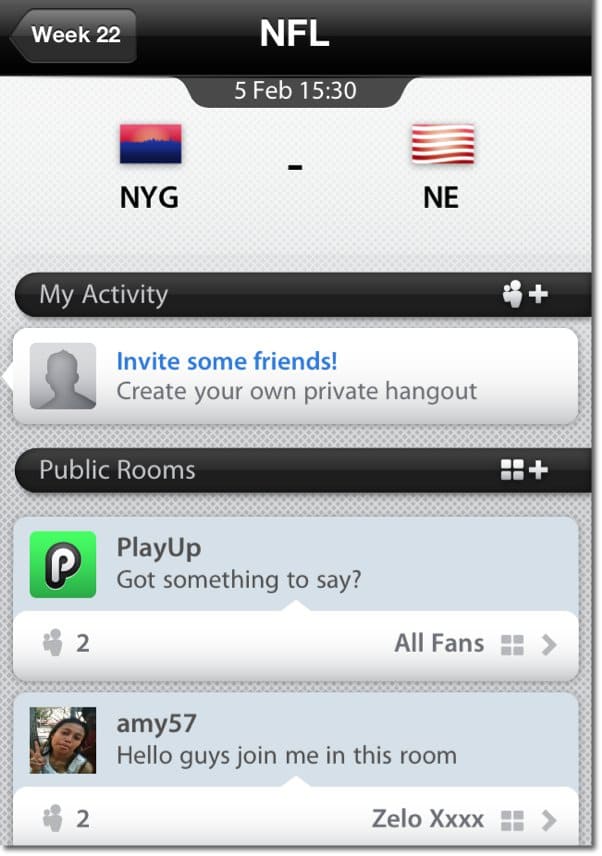 Not tuning in for the game? Well there’s an app just for the commercials too. Appburst’s Super Ads: Super Bowl Commercials lets you watch over 200 ads dating back to 2006. Of course you’ll find the new commercials from this year’s commercials there as well. Search commercials or browse by brand or company. Super Ads is $1.99, and is a universal app for iPhone and iPad. 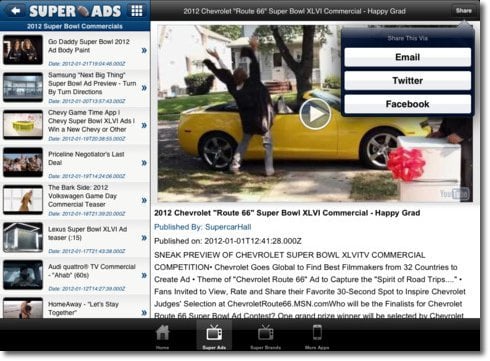 Of course there’s also the usual social apps including Facebook and Twitter to engage with other Super Bowl viewers, but these apps will allow you to really geek out while watching the big game on Sunday — even if you’re not really a sports fan.