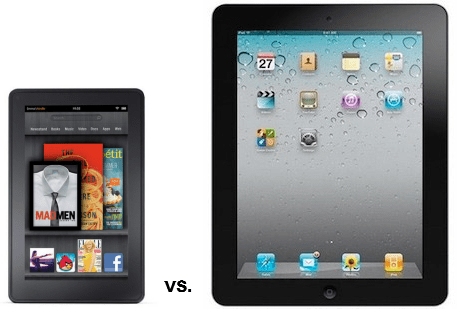 Amazon is taking steady aim at the Apple iPad with its Kindle Fire tablet announced today. At $199, the dual-core powered color tablet integrates cloud services, allows streaming of videos, music, and rentals and purchases of books and other media.
In terms of market penetration, the iPad has a heavy head-start.  But when it comes to the nitty gritty details of what’s under the hood of these two devices, the new Kindle Fire tablet stacks up quite nicely. Amazon obviously is taking a hit on profits — if it is making any at all, based on what our Asian sources estimate it costs to build these. So Amazon will likely try to recoup lost profits via sales and rentals of media.
It’s a model analysts told our reporters could work — and vastly differentiates it from the hordes of tablet makers who’ve tried and failed to take a shot at the Apple iPad this year so far. Forrester reports Amazon’s tablet is the best contender yet to face the Apple iPad, especially considering the millions of users who already use Amazon as a shopping hub and have provided Amazon with email addresses and credit card info.
Here’s a quick look at the specs and how they compare. We’ve yet to do a hands-on review, but the chart below shows how the two compare hardware-wise. Data courtesy of Amazon and Apple. Email us and let you know what you think.
1 Comment