The iPhone needed an easy way to upload videos to YouTube, and Google just provided a new app that will handle the job. It also has a few other features worth noting.

Google has been busy this year rebuilding its presence on iOS after Apple yanked YouTube and Google Maps off its mobile platform. As you groovyReaders know, Google has released standalone apps for iOS for Youtube and just recently Google Maps and both applications have received much praise from the iOS community as Google has put a lot of work into making both applications much better than their previous versions. Today, Google has released another application onto the App Store that will have you uploading your videos onto YouTube with ease. 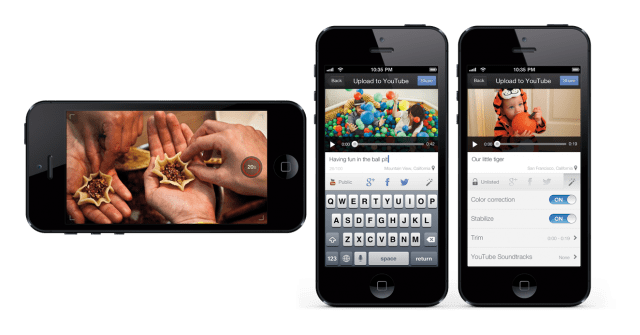 YouTube Capture is a new video application that gives users a nearly direct connection with YouTube as you can shoot video and publish it onto the service in as little as three steps. The application offers the ability to improve videos through in-app editing, color correction and image stabilization.

YouTube Capture gives users the power to decide who sees your video through YouTube’s privacy options, which can be helpful for those videos you’d like to share with your friends, but sharing with your parents or family members wouldn’t be the best idea.

Speaking of sharing with family, YouTube Capture not only allows you to publish videos to YouTube, but you can also upload them onto Twitter, Facebook and Google+ from within the application and simultaneously. Yes – you can upload your video onto all of these services, as well as YouTube, at the same time and all of the uploads will continue to take place in the background if you decide to minimize the YouTube Capture application.

One of the last features of the YouTube Capture application hopes to stop what Google calls “Vertical Video Syndrome,” which are videos that are captured while holding your device vertically forcing two black bars to take up the majority of the video. When you hold your iOS device vertically, YouTube Capture instructs you to turn your device on its side so you can capture your video gold horizontally, the way the tech gods intended.

This is definitely a welcome addition to the iOS platform as Apple’s native camera app doesn’t let you easily upload videos to YouTube. Now you’re able to capture special moments during your day and share them easily with a few taps to everyone. In the end, it seems Apple’s decision to drop embedded services from its mobile platform is Google’s gain.