This week, Google announced that it is rolling out a new sharing and chat feature in its mobile YouTube app to users. Here’s a look.

Google has announced that it is rolling out a new sharing and chat feature in its mobile YouTube app to users. The feature will allow you to send friends videos and chat from within the mobile app instead of copying the link to the video and sending it via text, social media, or email. 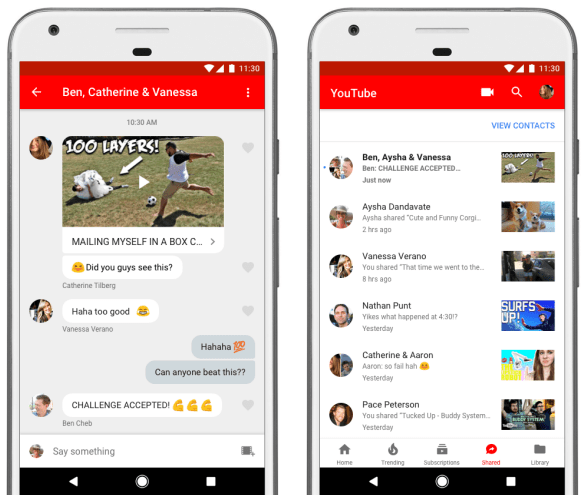 Not only can you share and receive videos in the app, you can also chat about them right on YouTube, reply with another video, invite others to the conversation, and more. We think it’ll make sharing easier, faster and more fun on your phone. And if you want to continue sharing videos through other apps, you can still do that too.

This new feature was being tested in select markets since the middle of 2016. After receiving feedback from users in the test markets the company has begun rolling out the new abilities to everyone. To try it out press the share button inside the YouTube apps and you’ll see a carousel at the top with your contacts. Tap the recipient you want and a message to go with the video if you want. The video below shows the sharing and chat feature in action.

Each time you share a new video it starts a chat and everyone in the conversation can share their opinions about it. Recipients can reply with text or with another video. You also will have the ability to invite other contacts to the conversation and like comments, too. This is still rolling out globally so if you send a video to someone who doesn’t have the new shared tab yet it won’t work until their app is updated.

It lets you find friends from your phone’s address book, however, there is currently no way to block requests from people you don’t know which could become annoying. Luckily you can always deny requests. Still, these new sharing capabilities will effectively turn YouTube into a mobile messenger and provide an easier way to socialize while watching viral videos with your friends.

Has this rolled out to your mobile app yet? What do you think of it so far? Leave a comment below and tell us about it.