Next week’s Worldwide Developers Conference is sure to have a certain air of vacancy to it – it’ll be the first of Apple’s annual extravaganzas to be held since Steve Jobs’ passing. But even though something will be missing from the event next week, there will be plenty to talk about.

Next week’s Worldwide Developers Conference is sure to have a certain air of vacancy to it – it’ll be the first of Apple’s annual extravaganzas to be held since Steve Jobs’ passing. 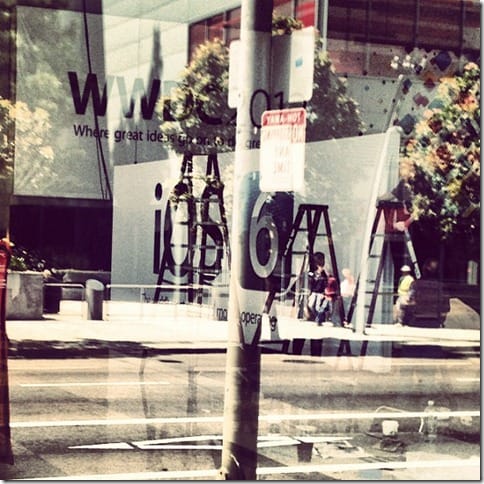 But even though something will be missing from the event next week, there will be plenty to talk about. Here’s a quick roundup of what to look for from San Francisco.

New Macs –  Barring a big Apple TV surprise, this is likely to be the sole big hardware announcement next week. According to 9to5 Mac, the rumor is that a new MacBook Air, MacBook Pro, iMac and Mac Pro could be announced on stage. Possibly with some nifty demos of a new retina display and the latest Intel processors with Ivy Bridge architecture. Anonymous sources also say the Mac Pro could be running on Intel Xeon E5 chips.

iOS 6 with Facebook – iOS 5 has enjoyed a nice year-long lifespan, so it’s just about time to usher in something new, and the above Instagram photo taken this week at the site of WWDC all but confirms that we’re going to see a new iteration of the mobile OS. We’re expecting to finally see Facebook integration throughout iOS with this version, which means a doorway is about to be punched in the shared wall between two of tech’s biggest walled gardens.

Apple Maps – Word is that Google debuted its cool new map features this month because they knew Apple was about to dump them for their own in-house mapping. Apple’s been gobbling up mapping and location data companies recently, and rumor is that the result will be a map feature with some pretty sweet competition for Google in terms of 3D, street view and more.

Siri on the iPad – It would make sense for iOS 6 to finally bring Apple’s voice assistant to its tablet. It’s not likely that Tim Cook and his cohort will simply add Siri to the iPad though, this is one place where I expect some sort of unexpected new functionality for Siri – perhaps some new take on navigation given the potential maps announcement?

Mountain Lion – One thing we know for sure is that Apple will be demoing the next version of the Mac OS for developers. Don’t expect anything earth shattering here, but there should be some cool new features that bring a little of the iOS experience into OS X. We should also know pricing and availability in the next few days.

Apple TV set – This is the big wild card driving some of the wildest rumors out there. Could Apple be readying an HDTV set that brings some of the iOS experience to the living room? Imagine apps, iCloud, a sweet display and using your iPad as a remote control. It all just seems to make sense and Steve Jobs even mentioned it in his biography. Is this all reality or just rumor? My bet – it’s going to be a reality, but not next week.