If you’re running the Windows Phone 8.1 Preview a new third update is now available. This update started rolling out on Thursday at around 10am PST.

If you’re running the Windows Phone 8.1 Preview – which anyone can get by following these simple instructions – a new third update is now available. This update started rolling out on Thursday at about 10am PST.

Updates have been coming fast and furious as the official launch of the 8.1 mobile OS for Windows Phone draws near.

The first update for Windows Phone 8.1 came in mid-May and addressed some battery life issue. The second update came out just over a week ago…and we’re not entirely sure what that update addressed other than performance and stability. 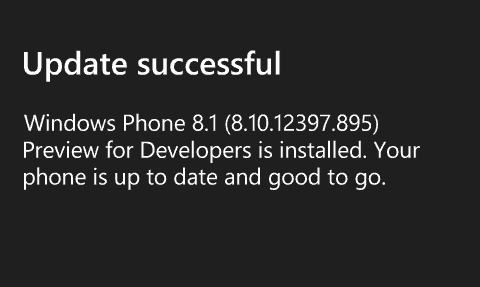 Microsoft was a bit more forthright about what this third update includes. According to the Windows Phone Blog:

Starting today at 10am (Pacific), the third update to the Preview for Developers will start rolling out, and you should be able to get onto build 12397. This update enables some newly commercialized devices and tweaks a couple of new APIs, so you won’t see a difference on your device, but we encourage everyone who’s on the Preview for Developers to stay current on the latest build.

I haven’t personally noticed anything different since this new update, but developers will, which in turn means we as Windows Phone users should starting noticing cool new app features.

If you’re on the 8.1 preview already, you know the drill…you should see that an update is waiting for you. If you have downloaded the 8.1 Preview to your Windows Phone, and don’t see it for some reason, just go to Settings > Phone Update > Check for Update.

On my trusty Nokia Lumia 520 the update took about 10 minutes beginning to end. The overall operation of my 520 seems slower, but that isn’t really a fair test as it’s the lowest end Windows Phone from Nokia in the US.

I would be interested if users of higher end devices notice any difference on performance or the way certain apps behave, leave a comment below and let us know.