Microsoft is getting even closer to releasing Windows Phone 8.1 to the public. Today the company released an update for it’s WP 8.1 developer Preview.

According to Brandon LeBlanc on the Windows Phone Blog:

we’re happy to announce that starting today we’re delivering an update to the Windows Phone 8.1 Preview for Developers (build number 8.10.12382.878).

If you’re a Windows Phone enthusiast and don’t have 8.1 yet, make sure to read our article: How to Get Windows Phone 8.1 Update Now.

That is our step-by-step guide on how to get Windows Phone 8.1 for free by signing up as a developer – and no, you don’t have to be an actual developer at all.

As I mentioned in that article, Microsoft refers to the 8.1 build as Developer Preview, but it is in fact the RTM and these are post-RTM updates.

There are no new features, but it fixes several bugs and improves battery life.

To update your phone go to Settings > Phone Update > Check for Updates. You’ll see the following message letting you know the update is available – tap the download button. Of course you’ll want to make make sure the phone is connected to WiFi and a power source as well.

After the it’s downloaded, you will get the following screen letting you know it’s ready to be installed, tap the Install button. 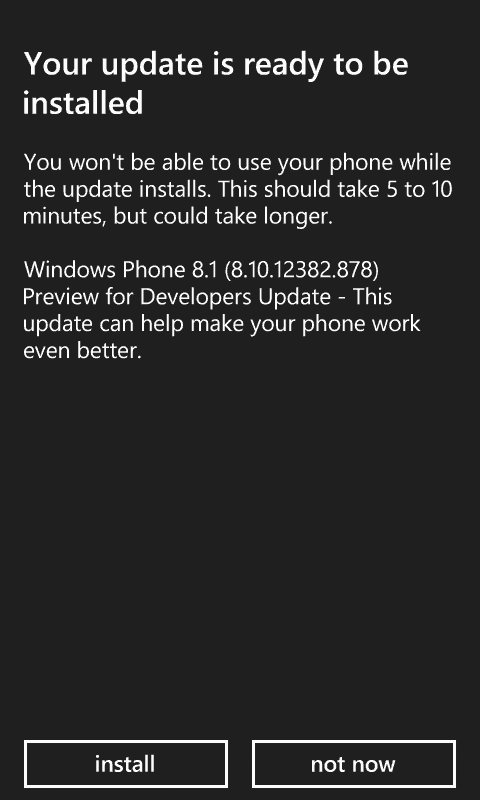 The amount of time it takes to install the update will vary depending on your phone model and data connection speed. I updated a Nokia Lumia 520 and it took about 25 minutes. I would imagine that if you have a higher end model, it would be closer to the 5 to 10 minute range.

If you just want to wait for the official version of Windows Phone 8.1, you’re looking at a launch sometime this summer.

I updated to Windows Phone 8.1 by signing up as a developer a month ago and have had no problems, other than the glaring battery drain issue. I’ve only had this recent update for about an hour, but if it allows for longer battery life, I‘m a happy camper.

Have you updated your Windows Phone yet? Leave a comment and let us know your experience. Is battery life indeed better on your device?