Windows Phone 8.1 has a critical update for users in the Preview for Developers Program. It was launched late today and is available to download now.

Windows Phone 8.1 has a critical update (8.10.14192.280) for users in the Preview for Developers Program. It was launched late in the day on Thursday of this week, and is available to everyone in the program.

Remember that the Preview for Developers  program is for…well developers…and also enthusiasts and early adopters. The program is free, and we showed you how to join earlier this year to be one of the first to get this years Windows Phone 8.1 update.

The thing to remember about being in this program is you will continue to receive all new updates and features before carriers (eventually) roll them out to regular customers.

There isn’t much to see here with this update though. According to Microsoft’s Mike Mongeau, “This update contains our usual scope of fixes and improvements. We’re requiring this update so we can continue to test our update systems. The update will show as a “critical update” on your phone.”

To get the update right away, go to Settings > Phone update > Check for Update. Then you can download and install it – your phone will reboot during the installation. 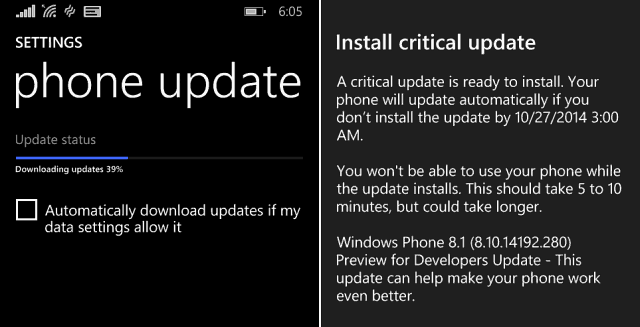 If you do have any issues with your phone after the update, you’re encouraged to leave a comment in the Windows Phone blog here.

Mike continues in his post “If you have any issues while taking this update, please let us know in the comments…My team and I will be closely monitoring your feedback. Thanks for being such great participants! We’re here and we’re listening.”

I installed the update on my Nokia Lumia 635, and all-in-all it took about 20 minutes. I haven’t had much time to play with it, but I’m not noticing any glaring problems.

What is your take? Have you noticed any improvements in performance, speed, or stability after this update? Or if you’re having any problems let us, and more importantly, the Windows Phone team know!