During Microsoft’s developer conference last week, the company showed off a proof of concept for a new Start menu in Windows 8.1 which could be coming sometime this year.

During Microsoft’s developer conference, Build, last week, Microsoft exec Terry Myerson announced, among other things, that there’s a new concept of the Start menu coming back in a future update to Windows 8.1. This should curb a lot of the criticism consumers and business professionals have had about the new Modern interface introduced in Windows 8.

The shot below is a proof of concept – not necessarily the way it will look – but it appears it will include both traditional aspects of the Start menu as well as new Modern Start screen live tiles too. 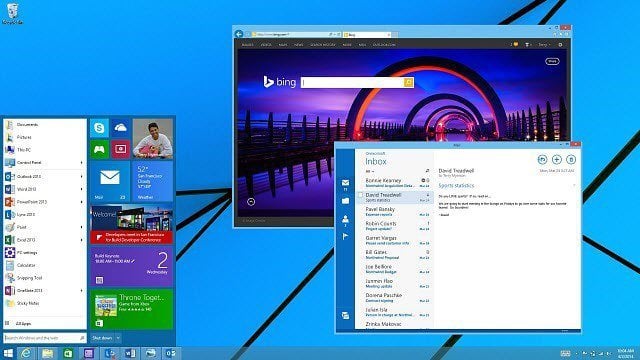 We set out to do this is a thoughtful way – one where we could enable more productivity for customers working in desktop mode, while building smart bridges to the new modern user experience and ensuring customers can get access to all your great apps in the Windows Store no matter where they are in the experience, or which device type they’re on.

Now that Steven Sinofsky and Steve Ballmer have bowed out of the company, and new CEO Satya Nadella has taken the helm, it looks like the company is listening to its  customers more. Will this lead to widespread adoption of Windows 8.x now? Time will tell. But it appears the future should be better for Microsoft on the consumer side.

Remember that Windows 8.1 Update comes to everyone on Tuesday, April 8th via Windows Update. This doesn’t include the Start menu shown above, but does provide a lot of new ways to interact with the Modern interface with a traditional keyboard and mouse.

It allows you to pin Modern apps to the taskbar, navigate the tile interface easier with your mouse, includes the ability to always display the taskbar, and more. Another new feature worth mentioning is when installed on a non-touch computer, it will now boot to the desktop automatically. No more need to make the change yourself.

For more, make sure to check out our article on what to expect from Windows 8.1 Update.