Microsoft today was busy releasing updates and new builds for Windows 10. We already told you how the company released Windows 10 Preview build 10532. And if you’re not a Windows Insider, you should be seeing three updates coming your way.

Unfortunately, we don’t know much about what the updates contain other than improving upgrade experiences and enhancements for functionality.

The company released the following updates:

Microsoft is treating Windows 10 as a Service (WaaS), and gone are the days when we’d only see a “Patch Tuesday” and the occasional out-of-band emergency updates. We should start seeing updates regularly whenever the company is ready to release them.

You will get these updates delivered to your system and installed automatically – Remember, you can schedule when your system restarts after receiving updates. If you don’t see the updates yet and want to get on top of them, go to Settings > Update & Security > Windows Update and grab them. 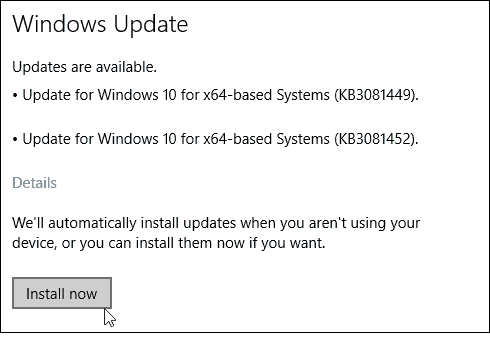 I’ve received several emails about people having issues with their NVIDIA GeForce GPUs in Windows 10. So it’s also worth noting that NVIDIA released a GeForce Hotfix Driver 355.80 today.

According to NVIDIA, this hotfix addresses “Excessive virtual memory consumption for SLI configurations running Windows 10.” It has released different versions for 32 & 64-bit versions for both desktops and laptops, and you can find the latest downloads here.

I downloaded all of these updates, and everything seems to be working just fine for me. Leave a comment below if you’re experiencing different results.