Microsoft today rolled out an update for Windows 10 PC Preview Build 14342 for Windows Insiders. It includes bug fixes including ones for Microsoft Edge.

Microsoft today rolled out an update for Windows 10 PC Preview Build 14342 for Windows Insiders in both the Fast and Slow Rings. This update includes bug fixes including some for new features in Microsoft Edge. 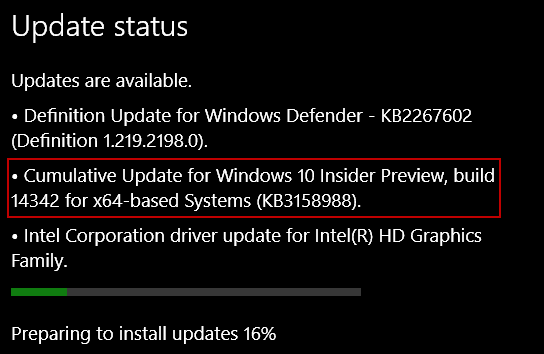 
According to an update by Gabe Aul in his blog post:

UPDATE 5/18: Today we are releasing Build 14342 to Windows Insiders in the Slow ring. With this build, Insiders in the Slow ring can check out the new features coming with the Windows 10 Anniversary Update including Windows Ink, updated Start, and more. We are also releasing an update for this build (KB3158988) that fixes the issue that occurs where you can’t close Microsoft Edge or get context menus to work if you turn off all extensions without uninstalling them. It also includes a couple of fixes for some issues causing some devices to bugcheck (Bluescreen). ISOs coming soon!

If you’re part of the Insider program and testing the new PC builds, you can grab this most recent update by going to Settings > Update & Security > Windows Update.

It’s also worth noting that the latest mobile version is getting an update as well. We covered the new Windows 10 Mobile Build 14342 on Monday. According to Microsoft, the mobile update is exactly the same but includes some additional fixes to improve reliability on devices. It will also bring your version to Build 14342.1003.

After installing it, let us know how things are going on your PC in the comment section below.