Microsoft today rolled out new Cumulative Update (KB3140743), Build 10586.122, that brings provides a large range of improvements to the OS.

The company points out that there are no new OS features or security patches, but it does contain a lot of bug fixes and performance improvements. Here’s a look at installing the update and what you can expect.

Microsoft recently launched a new Windows 10 Update History page and will start showing the changelogs of each update, something that Windows 10 users have wanted for a long time now.

According to the page, this new update addresses the following:

This update includes quality improvements. No new operating system features or security fixes are being introduced in this update. Key changes include:

While there are no noticeable changes to the UI, this update is marked as critical and contains several important stability and security fixes. It will be automatically downloaded to your PC or device, but if you want to get on top of the situation, head to Settings > Update & Security > Windows Update.

Of course, you’ll also need to reboot your PC to complete the update. Remember that you can schedule a time for the restart that works best for your situation. For more on that, read our guide on how to schedule Windows 10 Update restarts.

When the About Windows screen comes up you’ll see that the build number has gone up a bit to 10586.122. 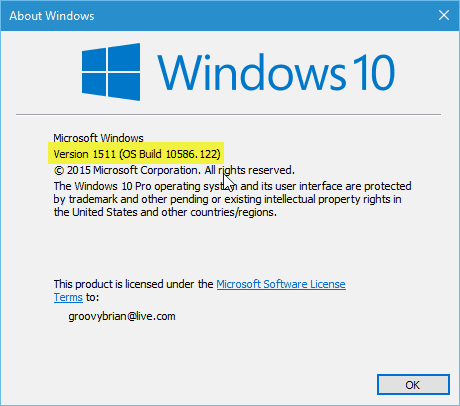 After installing this update on your Windows 10 system, let us know how things are running in the comment section below. Or for more detailed conversations make sure to hope in our free Windows 10 Forums.