Microsoft held a one hour briefing today and surprised us all by announcing the name of the new OS. It’s not called Windows 9, instead it’s Windows 10.

Microsoft held a one hour briefing today and surprised us all by announcing the name of the new operating system. No, it’s not Windows 9 like everyone though, but Windows 10 – yup…Windows 10.

When asked why the company decided to skip from Windows 8 to 10, execs said “This product, when you see the product in your fullness I think you’ll agree with us that it’s a more appropriate name.”

Today’s briefing was short, and focused on the enterprise features, but we did get a glimpse of some of the new user interface enhancements.

There will be a new Start menu that will include resizable tiles for Modern apps, virtual desktops (similar to OS X’s Expose feature), improved Start menu search from the desktop that will also include web results, and much more.

During the Q & A portion of the event I found this particularly interesting:

Q: You mentioned screens ranging from 4 inches to 80 inches. Is Windows 10 the next version of the phone operating system too?

A (Befliore): We’re trying to blend the experience across PCs, tablets. The best way to think of it, it will be a natural step forward from the Windows 8.1 model. It will not have a desktop (next version of Windows Phone).

It looks like Microsoft’s vision of “One Windows” is indeed the path the company is taking. 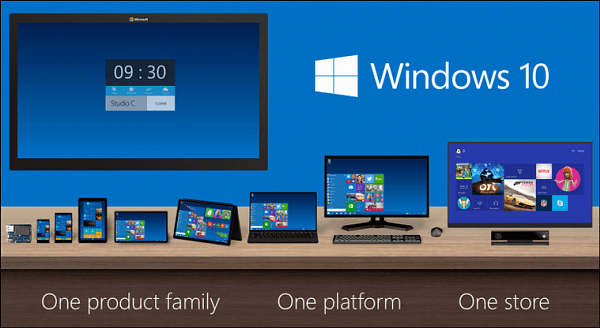 How do I get Windows 10 Technical Preview?

Important: This program is definitely mean for programmers and enthusiasts and not the average home user as this is unfinished software. If you do test it out, you can run it on a spare computer or virtual machine. However, for best results, and truly understanding how Windows 10 will work, I recommend installing it on a spare PC.

Starting tomorrow, head to preview.Windows.com and sign up for the Windows Insider Program using your Microsoft Account credentials. Below is a video from Microsoft exec Steve Belfiore that explains how the program works.

It looks like the release of Windows 10 will be similar to the Windows 8 release which started with the Windows 8 Developer Preview, and went through several iterations until the final RTM version was ready for the public.

While the beginnings of Windows 10 starts tomorrow, there will be several different releases between now and the estimated final release date which is slotted for “later in the year” in 2015.

I would assume a later summer / fall release, but that’s just me guessing. We do know that it will be after April of next year as the company said it will be covering the Universal Apps features at the Build developer conference.

What’s your take on these new announcements from Microsoft and the future of Windows? Leave a comment below and let us know your thoughts!

Update: Microsoft released a video of the full Windows 10 event which you can view below: