Microsoft has made the ISO images available to download for Windows 10 Technical Preview build 10041 this week, and released updates for it as well.

Microsoft last week release the latest version of Windows 10 in its journey to the final version of the future OS with Windows 10 build 10041.

Now, the company has made the ISO versions of Windows 10 build 10041 available so you can do a clean install on a test computer or virtual machine.

Windows Insiders who are in the Fast ring for updates were able to install build 10041 update as an in-place upgrade last week.

This week Microsoft also released three patches for build 10041 and these March updates are included in the new ISOs. The patches will provide better stability and security to Windows 10.

Being enthusiasts, we want to get new features of Windows as quickly as possible in order to test out new features. But one of the caveats of the Fast ring is that your build is going to have more bugs than those in the Slow ring.

Of course if you’re in the Fast ring, you can download these latest patches for Build 10041 via Windows Update which were rolled out today. 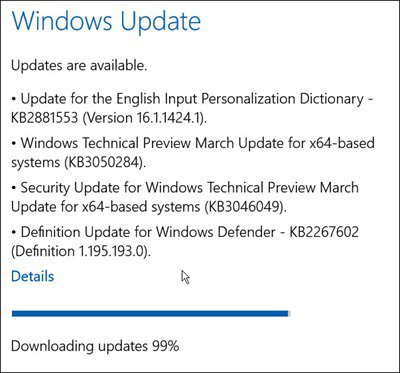 If you’re a Windows insider and testing out Windows 10, make sure to join the adventure by joining the Windows 10 Forum, it’s free and a great place for everyone to share their stories.