Microsoft today started to roll out updated Build 10586.71 to Insiders in the Fast ring. This is a Cumulative Update that brings several bug fixes and improvements.

Microsoft today started to roll out updated Build 10586.71 to Insiders in the Fast ring. This is a Cumulative Update that brings the Windows 10 Mobile build number in line with Windows 10 PC, and it includes several bug fixes and improvements. Gabe Aul made the announcement on Twitter earlier this afternoon.

To get on top of things and grab the update now on your Windows Phone head to Settings > Update & Security > Phone Update to start downloading it. You’ll need to restart your phone for the update to complete. 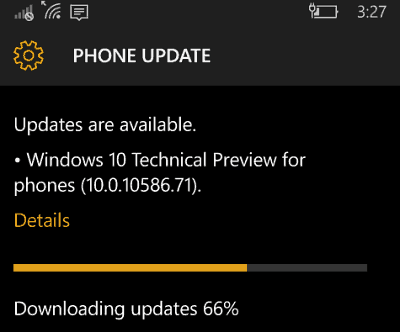 As is usually the case with Windows 10 Mobile updates, for me anyway, it can take a while for the update to complete. I’ve been using a Lumia 635 to test these new builds and it usually takes a couple of hours to complete. However, since this is actually considered a Cumulative Update, things are happening a bit faster.

After you get the update on your phone, leave a comment below and let us know how things are working.