Microsoft today started rolling out a new “Configuration Update” for Windows 10 Mobile Insiders. This update doesn’t bring any fixes or features for the OS.

Microsoft today started rolling out what it’s calling a new “Configuration Update” for Windows 10 Mobile Insiders in the Fast ring. This update doesn’t bring any fixes or features for the OS.

Instead, as Gabe Aul notes, “This update prepares devices to receive the next cumulative updates, as well as improvements to the client-side update experience.”

Here’s a look at the series of tweets that Gabe posted late this afternoon:

3/ There are no noticeable changes immediately after installing this Configuration Update.

You should get this automatically if you’re an Insider in the Fast ring. But if you don’t see it yet or want to get on top of the situation, you can grab it by heading to Settings > Update & Security > Phone Update. A restart is required to complete the Configuration Update, too. 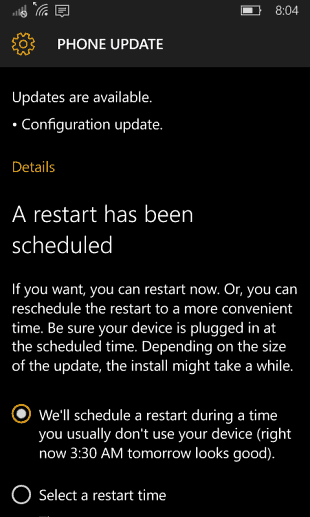 Again, there are no new features in this update. However, it does provide “under-the-hood” changes to prepare your device running the Windows 10 Mobile Insider Preview for the next round of cumulative updates.