One of the most anticipated features for Microsoft Edge in Windows 10 is support for extensions. They made a quick appearance on the web yesterday but quickly disappeared.

Update: This article was originally written for Legacy Edge, which is no longer supported. Now you want to use the Chromium-based version of the browser. It’s cross-platform and available on Linux, macOS, Windows 10, iOS, and Android.

Since the new Edge is based on Chromium, you can install Google Chrome Extensions. You can also get them from the Microsoft Store.

One of the most anticipated features for Microsoft Edge in Windows 10 is support for extensions. They made a quick appearance on the web yesterday but quickly disappeared.

The company has promised to provide a modern extensibility model for the browser, but no time frame on availability has been announced:

Microsoft Edge supports viewing PDFs and Adobe Flash as built-in features, but does not support any third-party installable plug-ins. This allows us to build a more secure and more reliable browser to make the Web a safer experience for everyone. We’re working on a new, modern extensibility model for Microsoft Edge in a future update. Source

Is Support for Extensions in Microsoft Edge Coming?

A Twitter account h0x0d was quick enough to catch a glimpse of Microsoft’s Edge extensions web page before it was taken down with a collection of ready-to-use extensions from third-party developers such as Pinterest and Reddit. 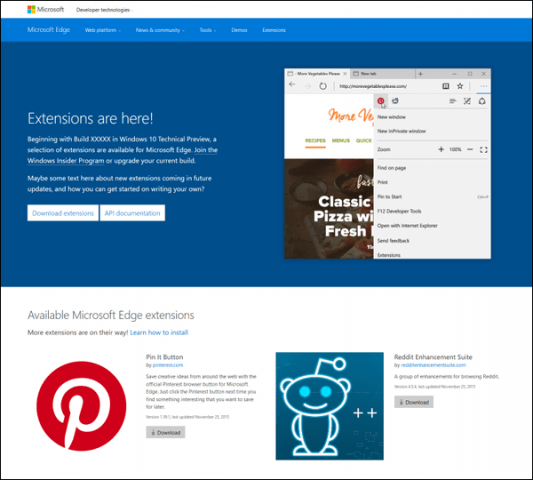 How will Extensions work?

Microsoft is making Extensions available to preview releases of Edge first, so people running public builds of Windows 10 will not be able to try it out yet. However, if you are part of the Insider Program, this will be how you can try out Extensions when they become available:

I am sure Microsoft will make it much easier when it is finalized. Even with this leak, we know there is something in place by the company to get extensions working with Microsoft Edge. With the release of the November Update for Windows 10, Microsoft added some new features to Edge such as Tab Preview, improved security, performance enhancements, Cast to the device, and syncing capabilities.

Cortana integration in Edge has improvements, too. Extensions are a popular tool when using a modern web browser. And it has built the success of Chrome and Firefox. Microsoft Edge’s speed and performance in Windows 10 are phenomenal, and its other features are unique and interesting. However, the key missing ingredient is extension support, and hopefully, we see it soon.