Late Thursday afternoon Microsoft released a minor update to Windows Insider Preview Build 16232.1004. If you blink, you’ll miss it. The main purpose of this update is to help Microsoft and not users per say. However, there are a couple of things to point out about this build. 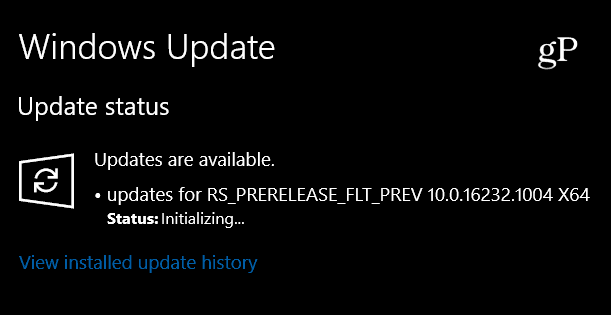 According to an updated blog post by the leader of the Windows Insider team, Dona Sarkar:

Today we have released Cumulative Update Build 16232.1004 to Windows Insiders in the Fast ring running Build 16232. The primary goal of this update is to test our servicing pipeline. This update should not require you to have to reboot unless you happen to have Notepad.exe open. This update only revs the version of the OS and includes a updated binary version of Notepad.exe and nothing else. It does introduce the following issues to be aware of:

This update will only remain available until the next WIP Fast build is released.

If you are currently running Windows 10 Insider Build 16232.1004, you should have access to this most recent cumulative update now. If you don’t want to wait for it to automatically update, head to Settings > Update & Security > Windows Update and manually check for it.

Note that Dona says the update will only be available until the next Fast ring build is released, which could come as early as tomorrow since there haven’t been any new builds released since last week.

While this update seems innocent enough, we all know that issues can happen. If you download and install the update, let us know in the comments how your system is running. Or, for all things related to Microsoft’s newest OS, join the conversation over at our Windows 10 Forums.