Microsoft today rolled out Windows 10 Creators Update Preview Build 15061 for Insiders in the Fast ring. This is the third Insider release for PC this week!

Microsoft today rolled out Windows 10 Creators Update Preview Build 15061 for Insiders in the Fast ring. This makes for the third Insider release for PC this week as the company puts the finishing touches on the final version which should be released very soon. 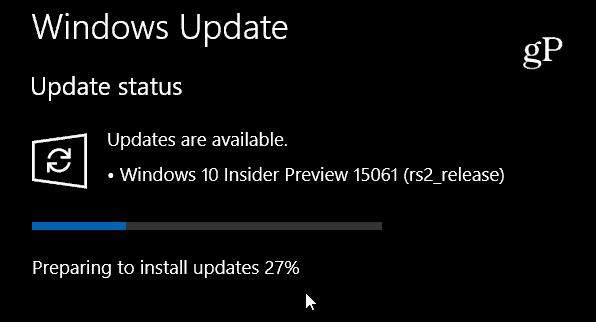 On Tuesday, we got Build 15058, yesterday was Build 15060, and today we get Build 15061 just in time for weekend testing. Just like the other two Insider builds released this week, there are no new features, but some important bug fixes under the hood.

To grab this latest build, make sure you’re in the Fast ring (if you moved to the Slow ring to get built-in app updates) and go to Settings > Update & security > Windows update.

Remember that with all preview builds there are known bugs and other issues. Head to the Microsoft Blog to see the full changelog. The rapid pace at which Microsoft is issuing Insider preview builds is a signal that the finalized version is just around the corner.

If you’re an early adopter, but not part of the Insider program, make sure to check out our article: 12 Things You Should Do Before Installing Windows 10 Creators Update (Version 1703) first to get your PC ready for the big update.