Microsoft today rolled out new Cumulative Update KB3135173 for Windows 10. The update contains bug fixes, security updates, and performance enhancements. It also brings the previous Build 10586.71 all the way up to Build10586.104. Here’s a look at installing the update and what you can expect.

There aren’t any noticeable changes to the UI in this update, everything that’s included in this update is under the hood bug fixes to enhance the functionality of Windows 10.

According to Microsoft’s new Windows 10 Update History page this update addresses the following:

For more info about the security fixes in this update and a complete list of affected files, see KB3135173.

You’ll get this latest update automatically at some point, but if you don’t want to wait, you can grab it manually by going to Settings > Update & Security > Windows Update.

You also will need to reboot your PC to complete the update process. But you can always schedule the restart for a time that works best for you. For more on that, read our guide on how to schedule Windows 10 Update restarts.

There you can see that your Windows 10 build number has jumped up a bit. 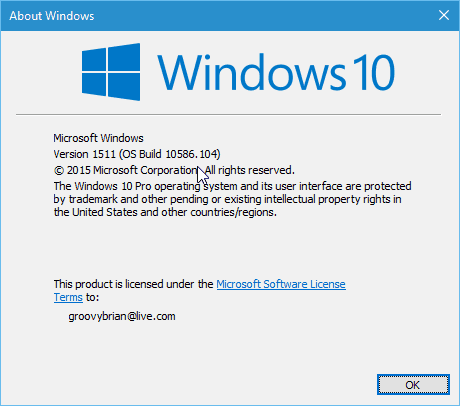 After you get this latest Cumulative update installed, let us know how things are running on your Windows 10 system in our comment section below. If something is not working correctly and you need more help, hop into our free Windows 10 Forums for more discussion and help.