Microsoft today rolled out Windows 10 cumulative update KB3116908. The company has been busy today rolling out display drivers for Surface and more.

Microsoft today rolled out Windows 10 cumulative update KB3116908. At the time of this writing, there is not a lot known other than it “includes improvements to enhance the functionality of Windows 10 Version 1511.” It’s also worth noting that this update will bring your build number up from 10586.14 to 10586.17. 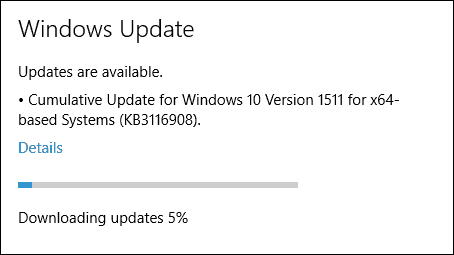 As always you can wait for it to install automatically, or get it manually by going to Settings > Update & Security > Windows Update.

A restart is required and, if you have notifications enabled, you should see it pop up on your screen. You can always schedule the restart for a time that works best for you. For more on that, read our guide on how to schedule Windows 10 Update restarts.

After restarting, launch Run from the hidden quick access menu and type: winver and hit Enter. 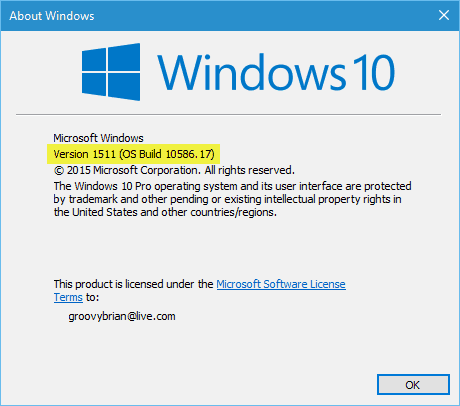 Update 112/2/2015:  According to Microsoft’s Knowledge Base support article:

This update includes improvements to enhance the functionality of Windows 10 Version 1511.

Windows 10 Version 1511 updates are cumulative. Therefore, this package contains all previously-released fixes. If you have installed previous updates, only the new fixes that are contained in this package will be downloaded and installed to your computer.

Microsoft has been busy with updates today. It also released new display drivers for Surface 4 Pro and Surface Book and updates for both Windows 7 and Windows 8.1 to make upgrading to Windows 10 easier.