Microsoft rolled out several updates today for all versions of Windows and Office, as well as a cumulative update for Windows 10 and a Flash security fix.

Microsoft today rolled out cumulative update KB3105213 for Windows 10 users. On top of that there are updates for other versions of Windows as well as updates for Microsoft Office. And yes, yet another Adobe Flash update is available.

This isn’t the big Windows 10 Fall Update that’s expected to be launched sometime this month. It is, however, important to grab all of these updates as they provide critical security patches as well as bug fixes. 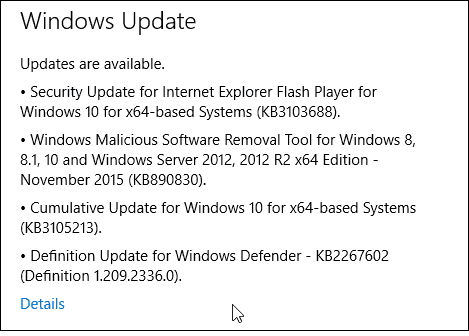 “Microsoft has released a security advisory for IT professionals about vulnerabilities in Adobe Flash Player in the following web browsers:

To learn more about the vulnerability, see Microsoft security advisory 2755801.”

We previously covered the sad state of Adobe Flash and the constant patches needed to keep it secure. Make sure to read our article on how to help protect your computer from Adobe Flash exploits in your web browser.

According to Microsoft’s support page, this update includes the following:

Windows 10 updates are cumulative. Therefore, this package contains all previously released fixes. If you have previous updates installed, only the new fixes that are contained in this package will be downloaded and installed to your computer.

A lot of updates were rolled out today, so make sure to get your computer(s) squared away. The updates will be automatically installed for Windows 10, but to get ahead of the game head to Settings > Update & Security > Windows Update and manually check for updates. A restart will be required to complete the process, but remember, you can schedule when Windows 10 restarts.

If you have any issues with these updates or notice any improvements to your PCs overall performance, let us know in the comment section below. Or, for specific questions and discussion join us in the Windows 10 Forums.