Microsoft today rolled out a new cumulative update for Windows 10. The update is KB3097617 and includes improvements to functionality and resolves security vulnerabilities.

This update is for the stable version of Windows 10, and not to be confused with yesterday’s preview build 10565 for Windows Insiders who are testing out the coming TH2 update.

Also included is an update for Windows Malicious Software Removal Tool, and a security update for Flash Player that’s embedded in the IE for Windows 10. 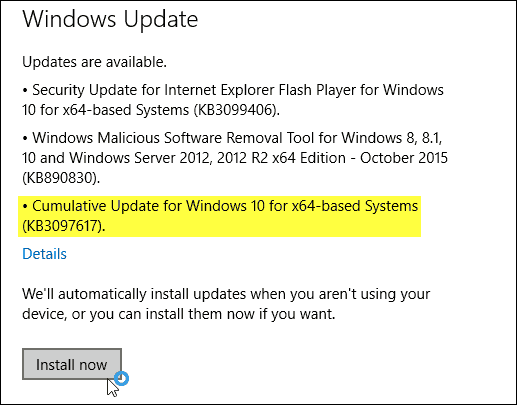 According to the Microsoft support page:

Windows 10 updates are cumulative. Therefore, this package contains all previously-released fixes (see KB 3093266). If you have installed previous updates, only the new fixes that are contained in this package will be downloaded and installed to your computer.

As always, this will automatically be downloaded and installed on your Windows 10 system. Or, if you want to get in on the update right now, you can manually grab it by heading to Settings > Update & Security > Windows Update.

By the way, if you want an easier way to access updates, read our article on how to create a Windows Update shortcut on the desktop or Start menu.

It should also be noted that a restart is required to complete the update.

Of course, you can schedule the update restart to a time that works best for you.

I just installed it on my Dell XPS 8700 production box running Windows 10 Pro and haven’t had any issues yet. Of course, that doesn’t mean other systems out there won’t have something go awry.

So let us know in the comment section below if you have any problems or notice improvements to your system.