Microsoft today is rolling out another new cumulative update for Windows 10 KB3081455. It’s been a bit over a month since the official launch of Windows 10 on July 29th, and the cumulative updates continue to rollout. This update comes just a week after its last set of updates.

The update is available now and will be downloaded and installed automatically. But if you want to get on top of it, go to Settings > Update & Security > Windows Update > Check for Updates. 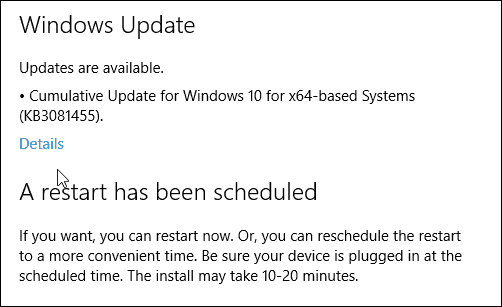 It appears to be security updates that resolves vulnerabilities described in Microsoft security bulletins below on this Microsoft Support page.

It’s worth noting that Microsoft isn’t going to be releasing detailed info or change logs for all updates…only significant ones. As Gabe Aul posted on Twitter (and many users are irate over):

@matteocontrini @ibektasyildirim We don’t do full change lists, it is too tough to manage and doesn’t really add any value.

As we have done in the past, we post KB articles relevant to most updates which we’ll deliver with Windows as a service. Depending on the significance of the update and if it is bringing new functionality to Windows customers, we may choose to do additional promotion of new features as we deploy them.

Since Microsoft is treating Windows as a Service (WaaS) we can expect several of these cumulative updates more often than on previous versions of Windows. Patch Tuesdays when the company would release a bunch of updates each month are gone in Windows 10.

I am not quite sure if I am a fan of this or not. While power users, and especially IT professionals in business and enterprise need to know the details of updates, the average home user will just get the updates in the background.

And if you think about it, how many times do you get updates for apps on your phone, and not even worry about it? Of course the argument is, this is an OS, and not just an app.

Either way, if we as Windows 10 users pressure Microsoft enough, the company just might start releasing more details on all updates, even if the company doesn’t consider them significant.

What is your take on Microsoft’s position on updates?

Also, I ran installed this one on two computers – a desktop running Windows 10 Pro, and a laptop with Windows 10 Home, and haven’t noticed any problems yet. Leave a comment below if you have any issues.