Microsoft today released cumulative update KB4090913 for Windows 10 Fall Creators Update which will bump your build number to 16299.251. There are no new features to report in this latest update. But it does fix an issue with Windows 10 that can cause USB and onboard devices like cameras or keyboards to stop working. This is a minor update, and this release only fixes that one issue. Here is a look at what to look for in this build.

Here is what has been fixed with this latest patch according to the Microsoft release notes:

Do note that, as with all updates, there are known issues with this latest patch. One of the issues is you might not be able to download the update if your antivirus software isn’t up-to-date and contain a specific Registry key. Make sure to read the full release notes for all known problems and workarounds.

The patch should automatically show up in Windows Update which you can get by heading to Settings > Update & Security > Windows Update > Check for Updates. Or you can manually download it from the Microsoft Update Catalog.

After you install the update, hit the Windows key and type: winver and you will see that your build number has been bumped up to 16899.251. 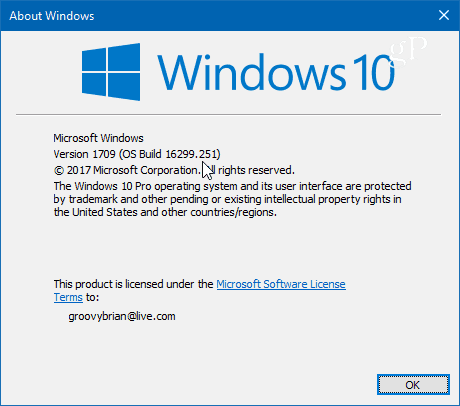 This latest patch bumps your Fall Creators Update to Build 16299.251

Have you been having issues with USB devices not working on your Windows 10 system and did this patch fix it or cause more problems? Leave a comment below and let us know. Or, join our Windows 10 Forums for more discussions and troubleshooting advice.