Adobe certainly doesn’t need to pull tricks to continue its success and near-monopoly in the graphics software market. So why, during its own MAX 2011 demo, did Adobe pretend to use software still under development to fix a photo that was badly out of focus–without telling the already enthusiastic audience that the picture was one that had been in focus originally. Adobe’s lab people had simply made it out of focus so they make it in focus. It’s akin to a magician putting the rabbit in a hat so that he can pull it out.

If you haven’t already heard all the details, it’s best to get started with Adobe’s own video of its magic show. If you want to skip directly to the trickery, it begins at 5:35 into the video. Before that mark, the video shows another “mind-blowing Photoshop Sneak”–one that’s real. It corrects blurring caused by camera movement, a major blessing for any photographer who doesn’t have anti-shake built into his camera. Adobe could have impressed a lot of people with just that feature. But no, they had to stuff a rabbit into a plugin.

When the video episode was posted on Adobe TV, it took only two comments before someone under the name RichyC wrote: 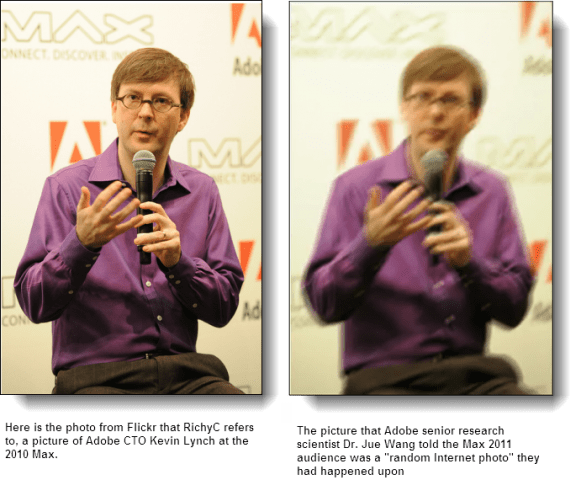 In what was really only a minor brouhaha that followed, Adobe released a statement that it was common practice in graphic research to artificially blur a photo to determine what works to undo the blurring. It’s much like the way a magician has an easier time pulling a rabbit out of a hat if he knows how he hid the bunny in the hat in the first place.

Within a few days of MAX 2011, Lytro Inc. would announce a light field camera, the first consumer camera that takes pictures that can be refocused after the fact. Adobe scientists surely knew about the upcoming announcement. So a possible explanation for their madness was that they wanted to establish bragging rights of sort some before Lytro could.

Or, in a remarkable example of Munchausen by Proxy Syndrome, they made a good photo bad just so they could rescue it.

But no, I think their motivation is one of the oldest, most cynical reasons in the world: They were brown-nosing the boss. It has become obligatory at any seminar, trade show, or product roll-out to work the boss into to it somehow. Sometimes it’s a little practical joke. Or it may be a “surprise” appearance.  I certain that at one time a planning session for MAX 2011 went something like this:

“You see, at first we pretend that this is just some screwed-up photo we found on the Internet. Then we work a little deblurring magic, and, oh my god, it turns out to be none other than Kevin Lynch! Do you believe that?”

Of course, we don’t. But it does help explain why Dr. Wang toyed with the truth when the truth could be so easily determined. It tells you why Wang didn’t use a really interesting photo–surely he could have found countless pictures more intriguing than a middle-aged businessman holding a mike, a picture like the pictures on one of Wang’s own sites, Deblur Famous / Interesting Photos.

But the charade wasn’t done for our benefit. It was done to showcase the boss as a superstar, stroke his ego, to make him feel for a moment that he’s the Michael Jackson of the industry.

Now if at MAX 2012 Kevin Lynch moonwalked across the stage, then I’d be impressed.

What do you think of Adobe fudging the truth? Underhanded? Or snazzy marketing? How about the product itself–the real one that no one fibbed about which corrects for camera movement — and could be in Photoshop 6 if we fuss about it enough. Take the hint? Then start fussing in the comments.