Despite all the learned explanations that followed the announcement, I was getting a headache trying to understate the Higg boson–until I stumbled across an animated cartoon produced by PhD Comics. 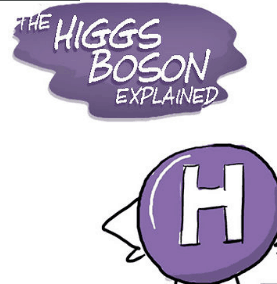 Until this week, whenever I heard people mention the “Higgs Boson,” I figured they were referring to a species of buffalo that used to roam the American midwest until they were all but hunted into extinction by a carnival frontiersman named Wild Bill Higgs.

But yesterday, CERN, the European organization that shoots subatomic particle around the circumference of a giant donut shaped tube, announced it has almost certainly uncovered the subatomic particle that has eluded physicists for decades– the Higgs Boson, a.k.a. the God Particle, so-called because it’s believed the Higgs boson is the particle that makes possible all the other particles by….

That’s where it gets sticky. Despite all the learned explanations that followed the announcement, I was getting a headache trying to understand the Higgs boson–until I stumbled across an animated cartoon produced by PhD Comics.

If you, too, have a raging interest in particle physics — It’s a perfectly natural thing all young geeks go through. No need to feel ashamed. — but you have a Newtonian knowledge level–and by that I mean the cookie, not the guy who figured out gravity when an apple dropped on his head–then you may find the video just below as enlightening as I did. Enjoy.